That was the title on TIME magazine for the story regarding the massive migration of Africans into Europe. The picture on the cover of the magazine was of a happy brown father carrying his son on his shoulders as he walks into Germany amidst a swarm of thousands of other migrants. We are seeing the same thing here. In a road side latrine at a rest stop between Edmonton and Whitecourt I saw some out house graffiti that summed things up nicely:

THE THIRD WORLD IS A CHIT HOLE BECAUSE OF THE ****S THAT LIVE THERE. NOW THEY'RE HERE...

And of course, it's far worse for Europe. Over a million mudflaps are streaming into Europe this year. The next wave looks to be about three million. The wave after that is even larger. Millions of illiterate, impoverished, and ignorant savages that turned their own lands into a dump - now want to move to Europe and they are doing so. Rape and violent race attacks are going through the roof in Sweden. Every other Euro nation that has a population of these monkeys has similar problems with them. How is this lunacy...this utter suicidal stupidity...allowed to continue?

My moral and intellectual superiors over at the Treehouse have a possible explanation.

I believe uncle Bob postulated once that women elected Hitler and Stalin. Although I've never seen that one anywhere else - I believe it has the ring of truth. Vox Day has few words and one damning picture that says it all. 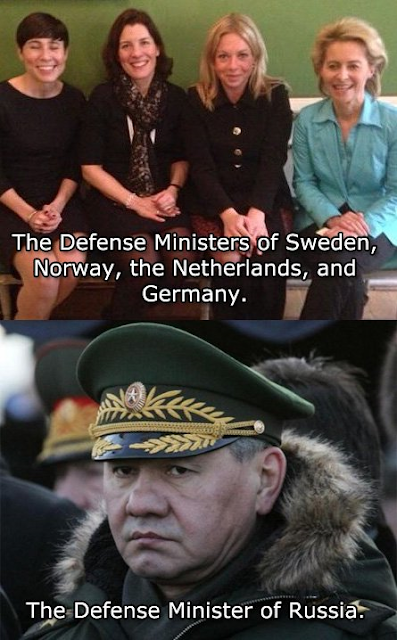 Russia - the next hotspot for African nation-shoppers. Good luck with that!
I favour Tim Horton's or the tailgate of my truck as my preferred coffee spot because of women exactly like those in the picture. Old, clucky, chattering dimwits in trendy scarves and tasteful clothes all clucking and squawking in lockstep unison. They dress up for each other, and pouring caffeine into those stunned cnuts is like pouring gas on a fire! That is what those four idiots remind me of.

Winston Churchill was often described as a 'German-O-Phobe' and had said that the problem with The Hun is that he is lying obediently at your feet or he's going for your jugular - and there is nothing in between. He was right, of course. Germany went from a bankrupt nation of rubber boots and tractors to a military power house of jack boots and Messerschmidts in a few short years. I can see them doing the same again as moslems rise to challenge them for ownership of their land.
I may be sexist to say it but I sincerely believe this: women have destroyed the bulk of the families through no-fault divorce. Communities have fallen after that. Nations are falling now. What's left? War?

I just hope that after WW3 is over - that we have the common sense and wisdom to get these stupid women out of affairs that should be handled by men - and back in the kitchens, schools, and hospitals where they belong. This is one social experiment that has clearly and utterly failed - and the bill for the clean up looks like it will be paid in blood if things keep going the way they are.