The Manosphere VS Old World Man And The Modern Generation Gap

Captain Capitalism, one of my best young bloggers - goes on a rip here.

Aarons' a good kid (forgive me, good man...he's in his 40's) - and he is typical of his generation. He's pissed as hell at the Republicans as are a lot of others. Vox Day comes to mind - he and his bezitted 14 year old fan-boys...errr, excuse me, "vile faceless minions" ... and masculine poseurs call them 'cuckservatives' because, apparently to them - the cuckold is the most spineless and contemptible of men. (I think ol' Voxxie's in for a rude awakening if his old lady ever gets a sense of self respect - but I digress, HAR HAR HAR!). Any number of bloggers and Manospherians won't hesitate to jump on the Repubs with both feet - and fling feces and whatever else comes to hand as they rage about the cognitive disconnect that separates our modern Conservatives and reality. Everyone is mad, nobody's happy and consequently the political right has divided - allowing the liberal scum to eat our lunch - both in America and Canada.

There is a generation gap at work here, one that I am in a unique position to appreciate. I am in my early 50's. I am old enough to remember the days of small towns like Mayberry because I lived in one. I remember the kindly white neighbours. I remember how the coloureds - although they had civil rights - were still kept firmly on a leash. Pot was something that only existed in the chit hole big cities like New York or Toronto, and most wives still stayed home with the kids to raise them while Dad worked as the bread winner. Welfare was seen as an indignity visited upon the unfortunate. Divorce was seen as failure - when was the last time you heard the term 'broken home'? The eeeeeevil Patriarchy or Old Boys Club was still around and doing well. The people currently running the Conservative parties these days are in their 60's for the most part, and were raised and educated in that environment. Men in those days led their families and were responsible for them. If somebody was unhappy, it was the head of the family's responsibility to find out why and deal with it - even if it incurred large personal costs and discomfort. It is what fathers and husbands did. They sacrificed, they worked hard and they were taught to respect others and take care of them too. This is what the Old World Man did. Most of the men in the Republican Party are Old World Men.  Most of the women are Old World Women. In those days women like Carly were as effective and competent as secretaries as they are today as CEO's. Old world men appreciated talent no matter where it came from, contrary to the race whores, the rancid feminists and other self proclaimed victims of patriarchy.

As you can imagine the Old World Man was a sitting duck for leftist wankers. He would bend over backward to try and make unhappy women - happy. He wanted honest, competent negroes to get a fair shake in the workplace and before the law. He had no problems, for example, getting behind first wave feminists that wanted equal work for equal pay. For the liberals - taking him out was like shooting fish in a bucket. Conservatives started a losing streak that still continues to this day, and each time they lose, they lose like the gentlemen they are...and things get a little worse. Affirmative action has America hiring foreign incompetents rather than her own children. Feral women divorce their husbands at the drop of a hat for cash and prizes and think nothing of the poverty and lonliness that ensues after a failed marriage. An entire generation has grown up looking at their parents like they were nuts - and were entirely right to do so. Aaron Clarey and Vox Day will throw women out on the street rather than tolerate their mistakes. They have been raised to avoid commitment, responsibility and restraint with women and who can blame them? Uncle Bob is an Old World Man frequently at odds with the Manosphere - largely because he does not understand how awful the modern woman has become.

This is the world that the Old World Man finds himself in today. Is it any wonder that he fails? From my place here, smack dab between generations - I see both the viewpoints of the New World Man and the Old. I've seen young men in the Manosphere over-compensate as modern society tries to emasculate them - and I don't blame them for their anger one bit. I've seen befuddled older Conservatives shrug in despair as they are dragged to the political left by the faggots, the feminists and the foolhardy. What else can they do? Stand their ground? That went really well for Zimmerman when he shot St. Trayvon Of Skittles, didn't it? Or the victims of witch hunts conducted by social justice warriors. You can get fired for making a joke about dongles nowadays.

The fact is, fellas, that none of us are in a position to avert what lies in store. None of us have the answers. Could Vox Day, Roosh or any other Manospherian take responsibility for a family? How about a community? Much less - a nation? From where I'm sittin' athwart the tides of history - they would eff it up even worse than the Repubs are doing today! They're boys that weren't brought up right. They are the leading edge of a generation of males conditioned to fail and defer to women. It's not looking good! The Captain and his lieutenants may object - but that is the way it is. They bitch about their elders but can't offer up any viable alternatives because they would get shot and quartered just as cuckservatives do when they anger the PC crowd. 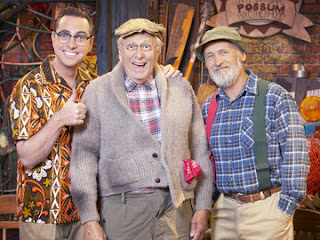 There's three generations of us headed to hell in a handbasket boys - and though we may agree on nothing else, boys - let us agree on this: We're all in this together! May God be with you in the days ahead...