As an old fart I get to sit back and watch the bloviating blogging boys of the Manosphere and quietly laugh behind my hands as they strut and preen and struggle to deal with the modern feral woman - and I suppose that I shouldn't. There but for the grace of God go I.  In the real world I've lost count of the good, solid men that should be happily married - but aren't. How in hell did I luck out when they didn't? It's like having 'survivor's guilt' almost.

It was a spectacular winter day at the rod n gun club today. When I got up to the front gate I had to stop and let a couple white tailed deer amble across the road. At our club wildlife has the right of way. There wasn't a soul at the range today - just the way I like it. 20 years ago it was easy to hit a couple days a week like that. Today, it usually sounds like Viet Nam out there and we had to cap our membership because we just have too many people for the facilities we have. 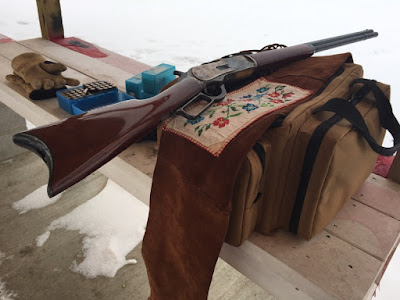 There she is. If God allows me to fall from this earth with a gun in my hand - may it be this one. Some men would like to crap out on the golf course...I would like to croak at the range doing something I love too.
That's a modern repro of the Winchester 1876 Centennial Rifle. This gun is a big, gentle bear to shoot. 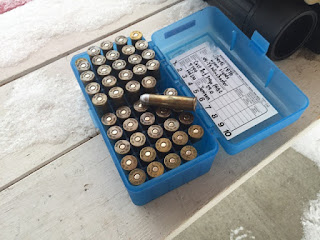 Praise the lord and pass...errrr...pray that I remembered to put gun powder in some of these...
We're shooting the obsolete .45-75 calibre today. You can't buy this ammo - some outfit in the States makes it but they want $75.00/Box of 20. Brass is almost impossible to get here in Canada too - it is around but it is very, very expensive. The bullets I cast myself, and the cases are charged with black powder. This is the first cartridge gun ever adopted by the RCMP, but they preferred a carbine variant of the gun. Making the ammo for this gun is an art and a science - one that I haven't mastered yet. The brass looks horrible because of the salts created by the burning  black powder propellant. It looks awful but is perfectly fine to use. 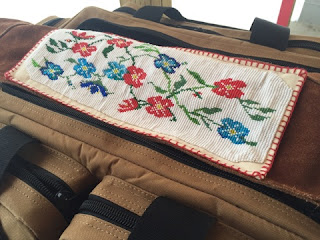 This beaded panel on my gun case was the height of manly fashion when the squaws beaded the artifacts and clothes of their men in the days of The Edmonton House Brigade.
Do you want to know how to identify a good woman and a suitable mate? Ask her to bead something for you. That beaded panel on the side of the buckskin gun case may not look like much to us today, but back when Edmonton was nothing more than a wooden fort and an RCMP garrison - colourful accents like this stood out like a neon sign on a dark night! Only the big shots and high rollers had stuff embellished like this. That pattern is similar to the ones used by the squaws and trappers around Edmonton in the early 1800's. My wife did it by hand - and it is a helluva lot of work. The case and the beading are a perfect PC (period correct) compliment to the gun. It took my soul mate  a long winter season's leisure time to do that too. Some collectors will pay through the nose for stuff like this. 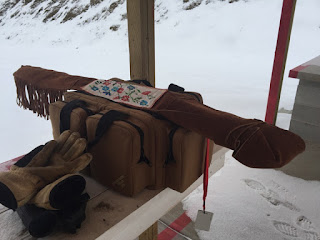 Back in history some women went to great lengths to demonstrate their love for their men. You can say what ya want about my arts n crafts...but how many women would invest time like that in their men today? If more did...there probably wouldn't be such rampant divorce rates. There's more love in those little glass beads than any gold ring or Christmas gift.
The manosphereians can go on extremis ad nauseum about women's flaws - they may indeed be socialists and fascists by nature...but they can also be artists, story tellers, crafters and hardy, fiercely loyal allies that you can count on when life's storms are at their worst. When I die and go to hell and some lucky bargain hunter comes across that gun case...will he see the effort, the love and the toil that went into that beading? Will he wonder about the man that inspired the beautiful lady to do it?
Posted by Glen Filthie at 15:00