When I was a kid in 1967 Canada turned 100 years old and it was a 'thing' for communities to set aside small parcels of land to be designated as 'Centennial Parks'. Ours was a half-section about two miles out of town where they put in ball diamonds, fire pits and out houses. It was heaven for a young fella like myself that liked to pretend he was out camping in the boonies rather than on a bicycle day trip.

Today Centennial Park has been gobbled up by the growing town and has fallen into a deplorable state. Retirement communities surround it now. It's a veritable ghetto for surly, contemptuous senior citizens and degenerate old bastids like Uncle Bob. Rabbits deficate on the walkways. Scurrilous squirrels squawk obscenities and profanities from the trees at the innocent passersby. It's an unplumbed profundity of human trash - and the RCMP won't come near the place. No, those canary-legged cowards leave such cesspits to Captain Sweatpants, And His K9 Crimefighters!!! 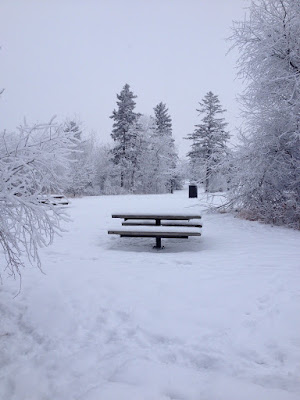 There are no picnickers here today - a function of senior gangster activity, no doubt.
My aunt likes to walk these trails. She loudly brags that she's not afraid of me or my pussy-dogs. She didn't look so thrilled when Mort slobbered all over her the other day...when Mort drools, everyone gets slimed. I have seen kids run shrieking from Mort when he starts to drool. His Super Saliva is a devastating crime fighting weapon. 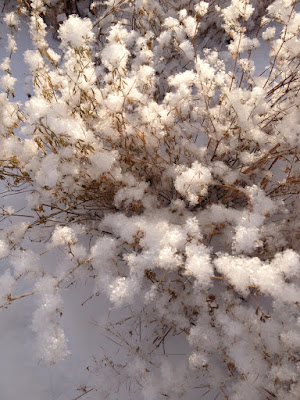 Amidst all this moral decrepitude, sometimes a fella misses beautiful things that are right under his nose. 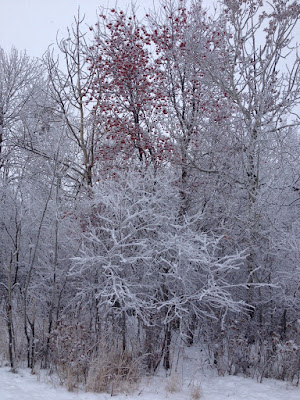 A beautiful tree? Or a deadly boobytrap???
While walking the shrubs Macey disappeared. Fearing the worst I found her lollygagging nearby and rolling in the snow like a mentally disturbed miscreant - a clear dereliction of duty. I started cursing her out - and a pile of snow fell from the over hanging trees and I went silent as freezing snow slid down the back of my neck. There, it melted and ice cold water trickled down my back to pool in my underwear below. Damnation!!!  I blame the local seniors for this - and they will pay for that, by Godfrey!!!
﻿ 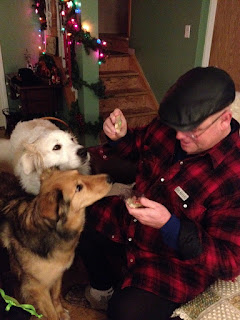 Is this the end of Captain Sweatpants? Defeated by a soggy bottom?
We were beaten into a strategic retreat today - but we'll be back tomorrow. There will be no fun in Centennial Park when I'm around - and properly equipped to deal with the numerous threats of the environment.
Hey - Chicken Mom wanted snow - and any of you that want some can have it too! Just close up the coop and hit the brooder lamps to keep the birds toasty - and you can have all the snow you want!
Edit/Addition: There are actually good men out there on patrol doing God awful work on one of the best days of the year. Merry Christmas to the squaddies and the RCMP, the ERT guys and anyone else that drew the short straw and has to work today. I actually saw a squad car in the park today and I feel better knowing there is somebody near looking out for the park and the seniors even on the holidays.﻿
Posted by Glen Filthie at 11:38