Quick! Head over to The Feral Irishman's! He has a spectacular picture on the header of his blog. Someone else had a picture of their family Christmas tree from 1951 and I think they got the ornaments from the same store my parents did in the 60's and 70's.

This year I decreed that I wanted some yuletide cheer around this dump, and my queen delivered. We are old farts so we only have a small tree. And - because I am a retard and a villain that usually gets (and deserves) a lump of coal at Christmas, we spread the wife's presents out a bit so that it looks like I got some too! 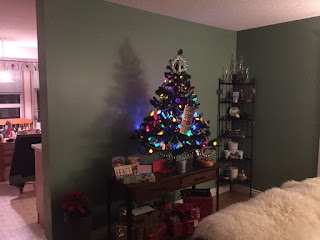 Goddammit. The kitchen table in the background is covered with electronics and junk! Who's the slob responsible for that?

Errr...sorry about the mess. If it isn't electronics all over the kitchen table, it's friggin guns. Yannow the FBI and the RCMP would probably have a bloody bird if they saw what goes on over that table my father built 15 years ago. It's a sad day when our own law enforcement can't tell the difference between a gun club duffer and a 'domestic terrorist' half the time. You can't see it but the rest of the living room is festooned with red and green ribbons, and holly. What are those red Christmas flowers called? They're all over the place too.

We don't really have any Christmas traditions here. We do have quirks though. On that little tree there's a goofy looking cat decoration that closely resembles Sinker Macduff. I got pished to the gills one Christmas - was it really 25 years ago? -  and "caught" one of the feral kittens living in Pop's haystack out at the farm. I lost 5 quarts of blood but I got him into a box and three days later we had a perfect domestic house cat for our toddling daughter. He loved to eat. There is another cat ornament on the tree that looks nothing like Joe The Schmoe. My daughter and wife brought him home to keep Sinker company a year later. The house literally shook when those two decided to wrestle. You couldn't put presents out until the last moment or they would unwrap them to play with the paper and ribbons. They ate tinsel and loved to climb the tree and knock the ornaments off. Also in there is a white dog ornament that looks something like Sled Dog Sally. She was a pound puppy - a Siberian Husky. Apparently she was part of a puppy mill and was found in a sweltering van in the middle of a blazing hot summer day with about a dozen others - and she was one of the dogs still alive when the rescuers finally got them out. The survivors were confiscated from the owner (I hope he was charged) and eventually she came to live with us. I still remember how shocked she was by the amount of food she got. She would look at her bowl and then at us like "This...? This is all for me?" She loved the cats the second she laid eyes on them. I know how weird this all sounds - but for me, it's a way of holding departed friends close. To me it makes perfect sense! Quirks are quirks, and stupid old men will indulge them.

So here I sit on Christmas Eve. I am warm, snug, in the early hours of the day and thinking to myself, "Jeez, I would sure like to get out of my warm bathrobe and slippers, leave all this Christmas cheer and go outside to freeze my ass off for no good reason whatsoever!" Unfortunately, there's nobody around here that wants to do stuff like that at 6:30 in the morning when it's -14C out. 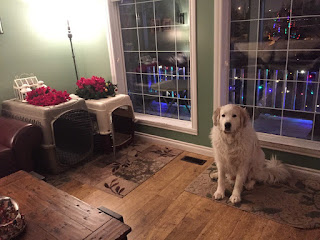