When my daughter came out of the closet and announced her homosexuality I went through the emotional wringer. She did it over the email. She accused. She threatened. She hated.

Of course, back then we didn't have the understanding we do now of things like the social justice warrior, micro-aggression and cry-bullies. At first I was shocked and devastated to learn that I had traumatized my daughter (I admit it. I'm a child abuser. I spanked her when she was in grade three for bringing home several angry notes from her teacher complaining about her conduct. In my defence - I only did that when the time-outs and groundings didn't work). Regardless, my poor, noble lesbian daughter was so traumatized - she couldn't even stand to be in my presence to either eat or own her words against me. Why, it was so terribly awful - she couldn't even set foot in her home town anymore - the poor dear...!!! For about half a year I beat myself up at night, laying awake wondering what I had actually done to her that could produce this anger and hatred. From where I sat, our fights were the same ones I had with my parents, that you probably had with yours - and I responded as MY father did and his father before him. And like them - it was not something I enjoyed. Disciplining your kids is a distasteful, hateful thing that HAD to be done - like knocking the heads off the chickens in the fall or taking the pigs to the butcher. Fathers only discipline their kids - and their daughters especially - when there is just no other choice.

My progressive liberal in-laws promptly involved themselves in our feud and jumped on me with both feet. My father and law explained that the only reason I was having problems with my daughter and her homosexuality was because I was an idiot, a redneck and an asshole. He said that while drinking $200.00/bottle scotch - I know because I bought it for him. Everyone KNOWS that lesbians are just regular people that want to do interior decorating and look fabulous! Only an idiot, redneck and/or an asshole would have any problems with queers. Because homophobia, dontchya know!

I couldn't take it. I withdrew from it all, pushed my emotions aside - and started to think. The rotten wood burned for days, HAR HAR HAR! I went on the internet and found some closed forums where men like me could talk openly and honestly about stuff like this without the usual social justice wankers spewing politically correct crap in order to 'take control of the narrative' or whatever those sanctimonious assholes call it. The stuff I learned lifted a terrible weight off my shoulders that almost made me weep with gratitude and relief. Apparently, this behaviour and 'daddy issues' are quite common in young lesbians today. 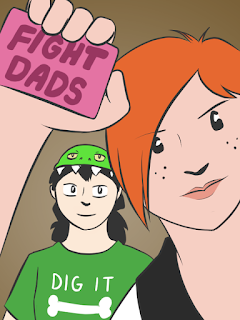 No thanks, chickie. I prefer to be beaten to a bloody green pulp by men. I know, I know: HOMOPHOBIA!!!!
Nice biceps.
Unlike faggots, who tend toward boisterous outgoing behaviours, young lesbians tend to be introverted, sullen and very angry. It's a natural fit with militant third wave feminism. Combine that with the fact that women are fascists and socialists by nature - and you have yourself a toxic mixture right out of the devil's cauldron. People like that are never going to be happy and will dedicate their lives to spreading that unhappiness. If you are a father, and you are confronted by a daughter like this, you have two choices: walk away and retain your self respect - or cave, as my father in law did, and tell yourself the same lies the queers and feminists are telling themselves. Either way - you are in for a rough emotional ride.

"Oh no!!!" Filthie gobbled in fright, "It's Amazing Girl and her carpet munching Social Justice League Of America!!!!"
Such is the entertainment of 30 year old lesbians.
﻿

This sterling example of high entertainment and homosexual drama comes from a web comic called 'Dumbing Of Age'. What you are seeing here, boys - is the wet dream of every fat, ugly she-twink with nose rings and hair dyed in all the frooty colours of the rainbow. It is a favourite of my daughter's apparently. I still shadow her on the internet because she doesn't talk to me anymore - and I see what she says on the public forums and blogs she hangs out at. Yeah, she's 30 years old, she's responsible for herself and her own future...but I still worry about her. The fact that she even reads diseased stuff like this...BAH. There was a time I just wanted to talk to my daughter and see if we could iron things out, but I see stuff like this and I don't want to lay eyes on my daughter - never mind hands. )No girls...or wymyn...your father would never swing at you like that and you know it. But don't let that stop ya from hating the old bastard. How furious these angry lesbians would be to know that they could do all that to a father and he would probably STILL forgive them (although he might not forget it).

The manosphere is obsessed with women and how to deal with them but has absolutely NO advice for fathers. Fatherhood is a HUGE part of manhood - and the Usual Suspects won't touch it. How DO you deal with the modern feral woman-child if she is your mother, daughter or wife? Is there a way where some modicum of family can still be salvaged?

For me...I had to walk away. As a father, when your family is walking a road toward ruin you can either lead it and hope to take the brunt of the impact when the metal inevitably hits the meat...or you can eject, gather up scott packs, the first aid gear and guns n hoses - and try and save as many as you can when they jump the guard rails and go end over end off the road to ruin.

You may not need me now, Little One. You will probably never need me again...but I'm still here, and here I will remain as long as I am able. Sometimes that 'red pill of reality' isn't something you casually take with a glass of water. Sometimes you get it shoved 10 feet up your arse as a suppository and the delivery is excruciating. If you ever need a real superhero Little One... Captain Sweatpants And His Fearless K9 Cohorts are always on duty. 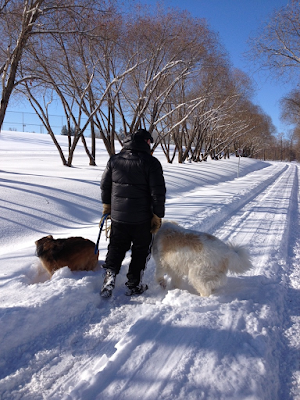 There are no snow days for fathers or super heroes. We're always there, in the nick of time to save the day, right?
Right....?
Posted by Glen Filthie at 07:05