How I Survived The War Of The Sexes - Epilogue

Shortly after the turn of the last century, the Battle Of The Sexes had become all-out trench warfare for a lot of stupid people with weaponized politics and out-house pop science and studies. Diseased minds unleashed weapons of ass destruction that turned the sexual landscape into a no-man's land. Divorce rates sky rocketed, marriage rates tumbled - and we now have two generations of men and women that honestly think a healthy, classical marriage isn't possible or even desireable.

Survival is a matter of definition I suppose. For my wife and I the battles raged all around us and eventually, when members of your own family are affected...it's only a matter before YOU are affected too.

My mother and father in law were Baptists when I first met them. But life had a few kicks for them too, I suppose. My father in law is not a weak man - but he's stupid. He's so stupid that he lets his idiot wife think for him and he defers to her as the head of his family. She was never that bright to begin with but the death of her youngest son (a heart condition the lad was born with)  hurt her deeply. So much so, she threw out her faith... and her morals and ethics accidentally went along with it. Having such a woman as head of a household is never a good thing. Call me a chauvinist - I could care less - but women aren't meant to carry loads and responsibilities like that, and the loss of a son would have made the job that much harder. Without faith, that family's morals and ethics and even realities all inverted...and they became lesser people because of it.

They seemed to latch on to us and cling closer than I was really comfortable with. I clashed bitterly with them in dealings involving my daughter. They felt their roles as grandparents trumped our roles as parents. They often got between me and my daughter and pushed their inverted (pardon me, ahem - "enlightened") morals and ethics at my daughter. She of course, was suffering the even more degenerate and inhumane aspects of the sexual war with the advent of mainstreamed homosexuality. She was busy creating and unleashing demons of her own.

My brother divorced and remarried. My wife's brother did the same. I hardly noticed them because my immediate problems were the outlaws and my daughter - but other families were coming apart at the seams too.

Last summer I figured it had been four years since our family split up - maybe I could patch things up with my inlaws and maybe eventually my daughter. Maybe...just maybe...they would be ready to listen to me. We invited them over for coffee. I apologized and tried to eat some harsh words I had thrown out. My mother in law graciously accepted it. Then I explained exactly why I was angry and said those words, and told them that I wanted the family back together again - but they would have to mind their place in my home and my family. My mother in law was NOT the head of my family; my father in law was no longer going to get between me and my daughter, and the new laws were as follows... ...and they didn't hear a word I said. A couple of weeks later they were stirring the pot between me and my daughter like they always did. Old scars split, old wounds re-opened and I couldn't take it anymore.

A couple weeks ago we almost came to be victims of this insidious, perverted sexual war too. I sat back and took stock: my homosexual daughter was an abject failure. There's no nice way to say it. For me to get along with the family, I would have to invert reality as they did and pretend my daughter wasn't a failure - but a huge success! Because homosexuality, dontchya know. Not only that, but I would have to accept her along with my mother in law as my moral and intellectual superiors. I would have to respect my father in law who had only contempt and derision for me because I wouldn't bow down to his wife. I was faced with a family that was living in such a way that they defied their own biology, 250,000 years of human evolution...and common sense...and I was expected to either go along with it or get lost. They have been daring me to do just that for years now.

Nobody was surprised when I flipped them the bird, but they were shocked and hurt when I asked my wife to come with me. She could go with them, or come with me but she could not do both. No way would I ever allow my family to do to her what hers had done to me and it had to stop once and for all. I think I narrowly won that coin toss.

The casualties in our family feud will do alright. My in-laws have money and treated their remaining son like a king. He'll probably reciprocate. They have family that they DO respect and they will do well with them in their final years. My daughter? Phew! Who knows? While she lived with us I did manage to instill a work ethic that she can activate any time, and I suppose brattiness, laziness and immaturity, unlike homosexuality - is easily cured. She will find her truth eventually, just as we found ours - but lord, the costs she will pay in the process will dwarf ours. Oh well...we're all adults, right?

My wife was heart broken but she handled it like a solid, beautiful old world woman that my Grandmother would heartily approve of. I think her grandmother would too. She will do splendidly, she has found a small church group comprised of some truly wonderful people. I may join them on occasion if they'll have me. As for me - for the first time in a long, long time...I feel like a man again, and better yet - a husband. On the wrong side of 50...I love my wife now just as I did when we were teens and she took my hand and heart as if she owned them both. I suppose she does. 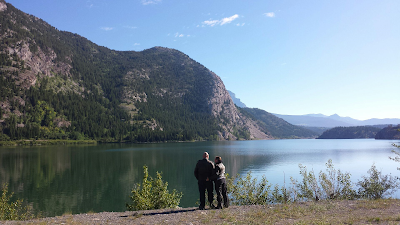 The road we're on is old, rough in places and long...and it's been a helluva ride at times...but the scenery is truly spectacular. I love you, sweetheart.

May you survive YOUR road and battles ahead too.
Posted by Glen Filthie at 07:35