In Which The Pastor Takes Filthie To The Woodshed

Nothing to see here, folks - just a bunch of nerds ganging up on one of their own and giving him a great big wedgie! Move along!﻿ 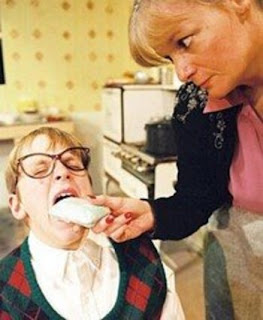 I said it before, I'll say it again. Peter is a good guy. He's done things I WISH I had the gumption and ability to do. I dunno WHERE he gets the idea that I am dirty and crass from...but I noticed even from childhood that others have made the same mistake with regards to my character and  vocabulary. Can you imagine my chagrin???

I also admit I misjudged Pete. I thought he was an incorrigible old hippy bastard like Uncle Bob with no redeeming qualities whatsoever, who seems to think we sacrifice our kids to meaningless wars for fun and amusement, and as a means of appeasing our inner ape and savage tendencies. What? Why, thank you, Pastor...I do believe I will have another bar of soap, please....

Peter dispenses with me and my arguments thusly:

““We used to be a balanced people. We used to be true to our values, but now we’re willing to betray our values because of a sense of fear? That’s not American. What the hell happened to that America I immigrated to?”

"I think the situation was put in a nutshell in the film ‘Gettysburg’, based on the novel ‘The Killer Angels’ by Michael Shaara. Character Buster Kilrain comments: “”Any man who judges by the group is a pea-wit. You take men one at a time.”
That says it all, right there"

Such is the source of my intemperance. I have a deal for our good pastor: I will dispense with my intemperance when he dispenses with his sanctimony.

I am no coward. Let us dispense with that right up front, sir. I was at the controls of an ultralight aircraft when the engine crapped out and did a controlled crash in a field of standing canola. People usually get hurt or killed and I took my little airplane in with the cold hearted detachment any F18 pilot would recognize and approve of. I didn't stop flying that thing until the wreckage stopped moving.

Further, I am 51. At my age I am looking at cholesterol, high blood pressure, prostate cancer, and all the other weapons in the Reaper's arsenal...and all I can do is smile. When you're number is up and God calls you home ... you go. Why fear the inevitable?

I know my own heart, and I know I am not craven. Bullies are likewise cowards - and I refuse to indulge in that behaviour as well. I am not offended by liberal internet morons that accuse me of cowardice, they are less to me than the mud on my boots - but it bothers me when a man like Peter does it.

I read in France they have busted three mosques so far. They've already found HUNDREDS of guns. How many assault rifles do you and your eeeeeeeevil Christian conservatives stockpile in the church, Peter? Are you seriously going to sit there and tell me this is the work of a few rancid individuals with poisoned minds? I'm sorry, boys, but I will not be swayed with this sort of poorly thought out rhetoric.

In the media, from Al Jazeera to TIME Magazine, you can see pictures of tens of thousands of yodelling moslem mudflaps screeching about death to America, Israel, and Britain. If the hundreds of terror attacks a year, with thousands of victims don't convince you that these animals mean business, then the pics of tens of thousands of them screaming for American blood won't either. Shame on you, pastor - for this is the stuff of public record. 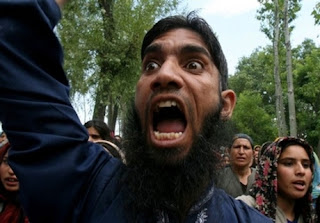 Relax, everyone. He's one of us...!
Just who, exactly, are the cowards here? I suppose I should be happy that Pete is at least questioning himself on this. Look - I know what Peter is trying to say. I know what his point is. I know that war is dehumanizing and wasteful. But who is the coward here? The bully, or the victim that won't stand up to him?
Ferchrissakes, hippies. ALL WARS ARE ABOUT MONEY AND POWER. Deal with it. And yes, it is distasteful to think about risking your life or those of your kids in a war over coins and power players who sit safely behind the scenes playing us like pawns. I get it.
But here in the real world, the guy controlling the money and power is of vital importance to us. That mutt in the pic above is not a lone nutbar. Swarms of mutts just like him have turned the middle east into a desolate, fly blown God forsaken cesspit. And now, large numbers of them are here in the west doing the same thing that made their homelands suitable for animals and that's it.
Are you going to tell me Peter, that you can take this mutt from a land where his fellows decapitate TODDLERS - and that he'll be a model citizen as soon as he sets foot in the west? Vox Day prattles about idiots and 'Magic Dirt'. If you are giving men like that ammo for his arguments you SHOULD be questioning yourself. You know what the kids are calling us because of guys like you, Peter?
Cuckservatives.
Sure, you may laugh and airily dismiss such juvenile name-calling... so why do you go weak in the knees when some moslem monkey calls you a racist?
Who's more the craven of us, again?
Posted by Glen Filthie at 14:35