If you're like me, you've got too many hobbies. So many, in fact, that there's barely enough time for crap like work and chores! For me, it's:

...any one of which, could consume most of my leisure hours and probably some of yours too! But all of them together...? I seriously need to win Lotto 6/49 and quit my bloody job because it is a serious distraction and infringement on my time. Until I get that bothersome, sordid nonsense sorted out, however...it seems that I'm gonna have to multitask. Recently I retired from hunting and it was like retiring from work - a relief and a trauma at the same time! It left a void in my life.

For the last 5 years I have been procuring my 'Grail' guns. I already have most of 'em - but I still need a serious BPCR gun and a six gun. (If anyone knows where I can pick up a pristine S&W .41 Magnum for less than $10.00 please buy it for me. I will gladly pay you Tuesday, for a pristine handgun today...). It'll come, but the other...?

There's a bunch of Italian made repro guns out there that simulate the now-discontinued guns of our ancestors. Was it really 5 years ago? How time flies! Awhile back one of these came up on the EE over at Canadian Gunnutz and I grabbed it.


Mine is in .45-75. A carbine version of this rifle was the first the first cartridge rifle issued to the Canadian RCMP. They didn't know a damn thing about guns in those days either! HAR HAR HAR!

I got burned on it, actually. Outwardly the gun was perfect but some shade-tree-clot-headed home gunsmith attempted to smooth out the horrible Italian trigger - and made it worse. Such are the hazards of buying used guns. I don't care; for me the thing is more a wall hanger than a shooter and is not one of my 'go-to' guns. But it whetted my appetite for my favourite of all the Black Powder Cartridge Guns (BPCR) - the Sharps rifle. The Italians make a repro of that too...


Okay. The Wops have done a superlative job on many of these repros...but they can't service them worth a darn. If you have a problem and your local gunsmith can't handle it...you're on your own.

I have a couple Uberti guns and quality has never been an issue. But with that big ol' lever gun...well, I need some parts to fix the problems caused by its previous owner and getting them is a bloody nightmare. Also, because it is in an obsolete oddball calibre - brass is like hen's teeth - and you will probably never see loaded rounds for sale in this calibre either. I need a Sharps rifle, in the easily obtainable .45-70 calibre! And...I found just the guys to do it!

Oh, man...a TUBA solo!!!! Turn up the speakers - and take the wife's fry pan to the side of your head with a smile! It's worth it! I am thinking one of those Sporter #1's with a 30" half-octagon barrel with some minor, tasteful engraving...boy, that would be a nice legacy rifle to leave behind when I shuffle off this mortal coil and go over the Great Divide! I could leave it to the rod n' gun club to auction off as a fund raiser or something. I dunno if this gun should stay on the bucket list or not...I need to have a look for myself.

The Shiloh Rifle company is in Big Timber Montana. That is within easy striking range of the Inferno - my crime-fighting bullet proof motorcycle!

By Google Maps, that's roughly 10.5 hours through Cow Town, Calgary and Lethbridge. An easy ride if broken up over two days. 13.5 hours through Glacier National Park. This makes for some truly fine winter-time planning.

In past trips on the motorcycle, I have always felt rushed. I want to make the next town. I want to see the next landmark or museum. Occasionally I have prayed for the fumes in my gas tank to take us to the next gas station...! I think I want this to be THE road trip of my fifth decade on this side of the dirt and I don't want it to be rushed.

By Godfrey, it seems to me that when a fella starts multi-tasking, contrary to the corporate chit hawks it usually turns out that a fella ends up doing a crappy job of a number of things at once! In this case I may have just conceived of a workable multitasked vacation!

Let the logistic preparations commence! If you see a red Kawasaki coming up fast and hard in the rear-view mirror - please pull over and stop and wait until we have passed! Captain Sweatpants is on a priority mission of vital importance!  ;) 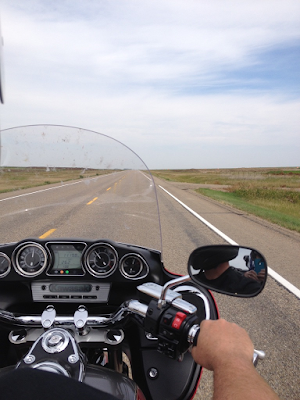