Bob is lecturing on how women are ruining the world again.

Not to knock Bob, but if I were to pick nits:

"That's why you don't see them (women) as carpenters and cab drivers and coal miners and loggers and iron workers..."

Well now, that isn't exactly true, Bob. Part of my job is doing safety sessions with  major clients in the proper use and care of bolting and torque tools in the steel erection industry. I have seen a handful of females in my sessions in the steel yards, and usually I only see them once. Bob is right in that they typically don't last long. It's hard, tough work in extreme heat and blistering cold and it takes a tough person to do it. 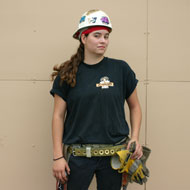 Oh you sexy thang...stripped down with that vixen's smile....
Here in the real world the average iron worker wears a leather harness festooned with
heavy pry bars, spud wrenches and hammers and has pouches filled with 1" (and larger) nuts and bolts, reamers, drift pins, etc. When they bring out the heavy artillery with the impacts, torque guns and bolting tools their loadout can easily weigh about half of what this scantily clad iron working gal does.

There's no place for chivalry in an environment like that. There's deadlines and pressure and if you don't do your job some other poor slob will have to. Iron workers won't put up with that chit nor should they - that job is tough enough as it is.

I only met one gal that stuck with it for any amount of time. During one of my safety lecture sessions, this lady interrupted, she flirted with the guys and when I asked her to stop it and pay attention - she told me I was a stupid ass. (Technically true, but an inappropriate discussion for the subject at hand). Quiet, deep laughter rippled through the audience of men big enough to take apart M1 Abrams tanks with their hands. You don't eff with guys like this. I replied "Yeah? I think you're a cunned stunt, lady. And - you can either pay attention, or get the hell out. I don't have time for your chit." I spoke to her the way I would to the guys. Because equality, dontchya know! The fellas were okay with that and a few smirked quietly to themselves. I went on with my dog-and-pony show. 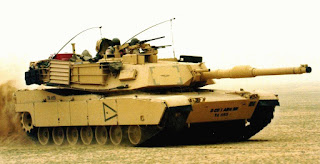 Our military is in for a REALLY rude lesson in the merits and realities of empowered feminism.
And of course a short while later she was back at it. "Have it your way Chickie," I said. "Get out." It was inevitable with a crowd like that. "Hey! How do I get out of this? I want to go too!!!" they hooted. All I could say is "Door's right there, fellas. But just so ya know - the Yard Foreman is serious about this little safety course and he expects me to be too. If you're not worried about that - you can just waltz right out that door with the lady." Being old hands none of them did - safety is a creed in most of the big steel yards nowadays, and woe be unto he that dares the rage and fury of ruling safety Nazis.
Later of course, the fit hit the shan when the class had to do their safety test on the material I had covered. The lady failed. They had her re-write it and gave her the answers, but I wouldn't give her a ticket. That in turn had their VP calling mine to demand that this obvious case of misogyny be dealt with - at once. Eventually the Corporate Machine finally got around to asking me for my side of the story, which I duly explained - and concluded that no, I don't care how mad the social justice wanks get - I was not going to sign off on that bitch's training cert.
There are realities to be dealt with in the real world, and I was eventually 'persuaded' to sign off...but only after we got a very nice purchase order for more equipment and a commitment for even more after that. Let it not be said that Filthie is an unreasonable man. I can almost hear the spirit of my role model and hero, Lesiure Suit Larry: "NYUK NYUK NYUK! Way to go, Junior!!!!" At which point he would probably turn to God and start bragging "Didjya see that??? I taught him everything he knows...!!!".  We'll be lucky if we don't both end up in hell I suppose, HAR HAR HAR! One might think that is the conclusion of my tale, but I beg the readers' forbearance. It gets better.
Fear not, men - for The Old Boys Club is not dead. In fact, it is positively thriving in this age of sexual equality and tolerance! For a year later I got the call from The Owner. There had been a serious industrial incident involving our tools in one of the steel yards during the night shift, and the client's Safety Nazis were clamouring for a scape goat! I would be luckier than blazes if it didn't end up being me as I was the designated sales/trainer on our equipment for that yard. One worker had gotten badly hurt and it was a 'Near Miss' incident for another. How could this happen? Had I not trained their workers properly? Oh, you can bet your arse there will be an inquiry!!! I was told to be in the client's Board Room tomorrow at 9:00. DON'T BE LATE.
Oh boy.
So the next morning I go into that board room expecting to be drawn and quartered. It was even worse than I had feared. The suits were all there, and I was stiffly introduced to the lawyers who would be asking some very difficult questions about our training process. About an hour later the victims of the accident were brought in to describe their side of things...two women. And - surprise,  surprise - one was the chick I had thrown out of my class a year before. The Yard Foreman was there and did the face/palm thing. The gal didn't recognize me - but I remembered her all to well.
The meeting was eventually turned over to me to formally discuss the incident with the victims. The lawyers duly asked me if I minded if they recorded the discussion? It would be my pleasure, I told the slimeballs. I started by reminding everyone that I had thrown this lady out of my course a year ago. I will always savour the glint of recognition in that gal's eyes when she remembered who I was. I almost sobbed as I described but left nameless the people that forced me - under duress - to sign off on her training. With my halo virtually shimmering in righteousness, I expressed a deep and dreadful concern about the possibility of a repeat incident like this because of that woman's conduct and attitude towards safety. Dammit, an example should be made about stuff like this! I yam outraged! I yam disgruntled and...offended. Won't anyone take safety seriously???  By the time I was done the execs all had done the face/palm thing too. I shut my yap then - just as ol' Larry would have - and let the Old Boys think as they nervously looked across the table at their own slavering feral Safety Nazis. "We'll finish this up here, folks," the Veep said, "and take all this under advisement. Mr. Filthie - thank you for taking the time to be with us today - we will be in touch." And with that, he fled the room. Milliseconds later a few of the Safety Nazis got up, made hasty farewells, and took to his heels baying and yapping like the dogs they were! The lawyers gave me looks of contempt and fury as they hustled the ladies out. In less than a minute there were only two of us left! The Yard Foreman smirked at me and said "Yannow what Filthie? You're a fuggin prick!"
"High praise indeed, Sean," I laughed. "Yes. Yes, I am." Gawd, sometimes I love this job. 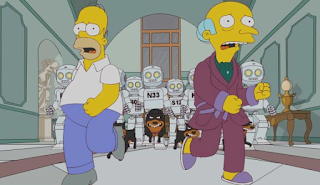 In every war there are winners and losers but ya never hear about the finks that profit from both sides. Is it morally wrong to profit from the War Of The Sexes? It is a war for stupid people because anything that hurts one gender ultimately hurts them both. Why not exploit them for fun and profit?

With the next PO we got cleaned us out at the Edmonton branch, and we had to start snacking on Vancouver's inventory for awhile. The order after that cleaned us out of stock nationally. The maintenance contract after that swamped our techs and it was so bad we had to air freight tools out to the other locations in order to turn them around fast enough to keep the client happy. Oh, I had to tweek my safety sessions a bit and consult with the client's Saftey Nazis for awhile - nothing is free in The Old Boy's Club.
Funnily enough, we never DID get around to resolving the real reasons behind that workplace incident. Nor did I ever find out who won the war I had started between the client's workplace Vibrancy & Diversity clan and the heavily female dominated safety Nazis.
Wouldn't be surprised if some good ol' boy over there took them all aside, told them all to STFU - and get on with business. Common sense has a nasty way of breaking out when $$$$ are on the line.
﻿
Posted by Glen Filthie at 11:24