Apparently the cat ladies and soy boys over at the Glob And Snail just discovered a horrifying truth: they suck and everyone hates them. Apparently they are astonished by this. (But they DID have the presence of mind to disable the comments, as it seems that more and more - that is where the truth and real story will be on anything written by that leftwing chit rag).

I always knew the press was biased and slanted. As a gun geek I heard those fart suckers quote phony stats, make outlandish statements, and prove beyond a shadow of a doubt that none of those slobs knew a thing about the subject. Whenever it came up, the talking heads were cunned stunts like Feinstein, Sarah Brady or some other clueless clot head that would emote for the cameras while cops and gun club stubfarts ground their teeth in fury.

The finals straw came, funnily enough, at the gun club where I was talking to a grizzled vet back from Afghanistan. He must a been about 23. He was almost in tears as he described his stint, how he and his squaddies were rebuilding life and civilization over there with schools, hospitals and courthouses. But all you read in the media was the usual blood dancing liberal slobs trying to make the effort look like a hopeless schmoz like Viet Nam.

Now I know a guy has to be careful about what he says lest he be accused of uttering threats. No, maybe journalists shouldn't be hung from trees by angry mobs. But if they were to be tried by a jury of patriots, found guilty of treason, and frog marched out into the courtyard to be shot by a lawfully assembled firing squad - I would smile, buy a round for the house and call it a good day. 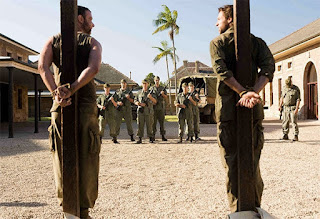