Funny - When It Happens To Somebody Else 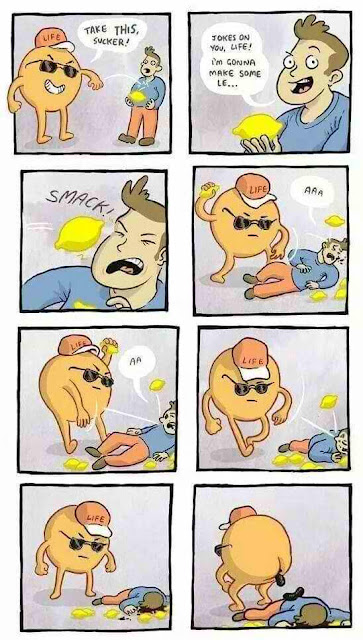 Last night I went to 'Prayer Nite' at my wife's church where I've been getting drawn deeper into Christianity despite myself. At first I went along with it just to support the wife but now I am getting immersed in it too. The process was downright painful and still is on occasion. Ya gotta basically confront yourself and your actions and admit what a botch you've made of it. That's the easy part. Supposedly we can hand off all our sins to our Maker and that sounds great - but then ya gotta start making efforts to be a real, honestly better person. I struggle with that too - I'm told everyone does. It's a work in progress - I am still having to reconcile my modern scientific biases with the mythology of the bible and I swear, some times you can smell the rotten wood burning between my ears! HAR HAR HAR!!!

On prayer nite someone picks somebody they're worried about and they explain what's going on - and the rest of us are supposed to pray for him. There's some old folks that aren't doing well and have health issues. The kids across the aisle were praying for one of their friends that got into drugs and disappeared. There's couples with foster kids with issues, and stuff that just makes me want to give thanks that I don't walk in their shoes. My recent employment issues are small potatoes compared to stuff like that.

One a the old boys at the church gave me one a those little tiny bibles they used to hand out to the kids back when we were in school. I guess they aren't allowed to do that anymore because some Marxist  hermaphrodite's milk will curdle or something. I've been reading it too; I've just about finished Matthew and will be on to Mark and all the rest of 'em in due course. Even if you are an outhouse Christian like me - this is fascinating stuff. Good grief - there is a pile of wisdom and strength and truth in this little book and I seriously have to wonder how utterly f***ed you have to be as a human being to deny it to our little ones in school. Denying kids access to something like this is an act of depravity.

Right now the lemonade is a little tart - but I'm doing about as good as a fella like me can do I guess.
Have a great Thursday.
Posted by Glen Filthie at 08:31