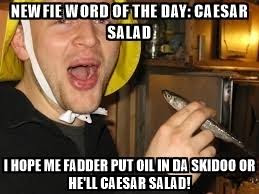 Back before we started importing innocent dreamers from chit hole countries to abuse and discriminate against - up here in Canada we abused bohunks (Ukranian immigrants) and Newfies (people from Canada's Maritime island of Newfoundland). Newfies are not to be confused with the garden variety cod-gobbling-clam-diggers from the Maritime provinces.

When we Canadians think of the 'Great Canadian Cultural Mosaic' we tend to think of the blacks and browns and other .... vibrants ... that the less we say of, the better! But back when we had a real Canadian cultural identity, Newfies played a huge part in defining it. Like Bohunks, they love rude jokes. When sober, they are the best workers you could ask for. When they're drunk - you sure as hell don't want to get in a fight with them, because most of 'em could pound the snot out of anything short of a grizzily bear. They are famous for their stupidity, their stout hearts and broad shoulders - and their accent.

Newfies can take anything ya wanna throw at them - and give it back with interest. They've made reputations for themselves clear across Canada - and especially right here in Alberta where I live. If the Great Canadian Newfie could be defined by a song - this one might be a strong contender.