Boys, I dunno what to think. I dug out a forgotten relic from my gun safe awhile back, and against my instincts - I am becoming smitten. Let me explain: I hate modern bolt action rifles. They're made of plastic, half of 'em shoot sub MOA right outta the box, and they have no heart and soul. (I very much love old milsurps though, such as the Enfields, Springfields and Mausers). It's the new guns I can't stand.

But peer pressure is what it is and I bought a chit house Remington 700 SPS tactical in 308 a couple years back - put a few rounds through it and threw it in the safe and forgot about it. It had a fine Swarovski 3x9 on it and a year or two later I was going to take it out for deer... and I started to play with it. The factory bull barrel was a POS. I didn't care, ya don't expect premium quality for an econo-job. I swapped it out for a Shilen Match heavy contour 20" pipe, twisted to stabalize 168 grain match bullets - and she started shooting all of a sudden. Groups typically run between .5 and .7" at 100 and while that isn't spectacular - it's acceptable for a pocket light sniper and hunting optics.

I never went hunting, I was too lazy to come out of retirement. But I kept tinkering with the rifle. So now, I want to start pushing this thing. Now I need more serious optics and pulled out a Trijicon 5x25. (Yeah - I should be shooting Nightforce but I'm between jobs right now, so I gotta get by with the Trijicon - which really isn't a bargain basement scope to be honest). Anyhoo: 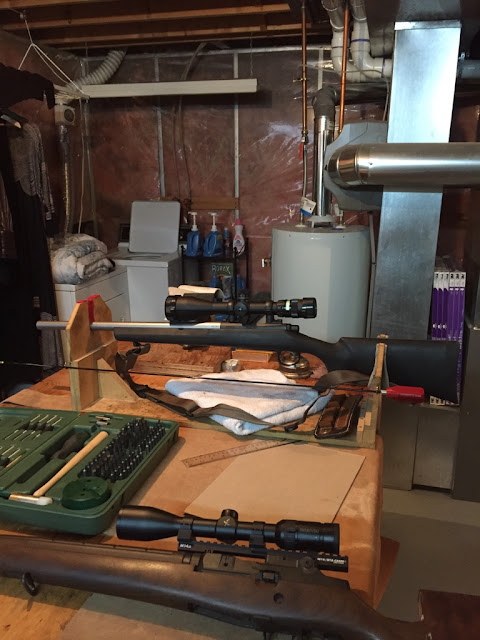 There she is, in the cradle, with the new big scope attached.
This light sniper is picking up some serious weight now.
But now we have semi-respectable optics to work with.

I've never really futzed around with seating depths on this rifle. I'd just seat my bullets out as far as the mag allowed and run with that. But now, I am going to start seriously trying to tailor a load specific to this gun: I am going to seat the bullets long - the theory being that the closer the bullet is to the lands of the rifling, the less 'jump' is required by the bullet, and the bearing surface of the bullet is presented more truly to the rifling - which theoretically means better accuracy. Longer shells means that the gun will be effectively a single shot - which I don't mind for range or hunting because I only ever need one shell anyways. 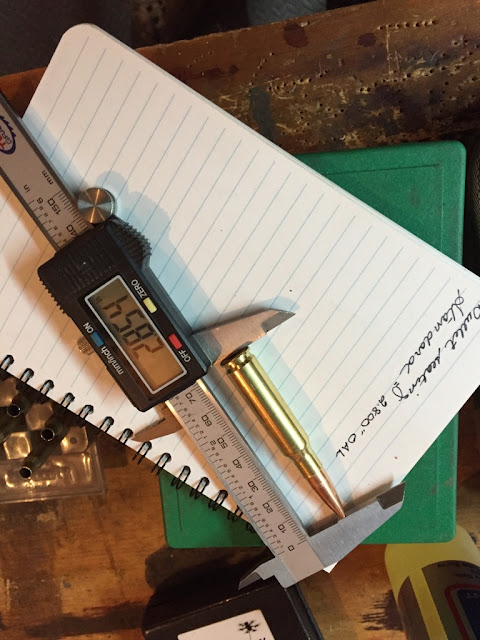 Take an empty case, partially seat it - then ram it
into the action and close it.
That is your minimum seating depth.
I'm gonna set my bullets about .0005 less than that to start. 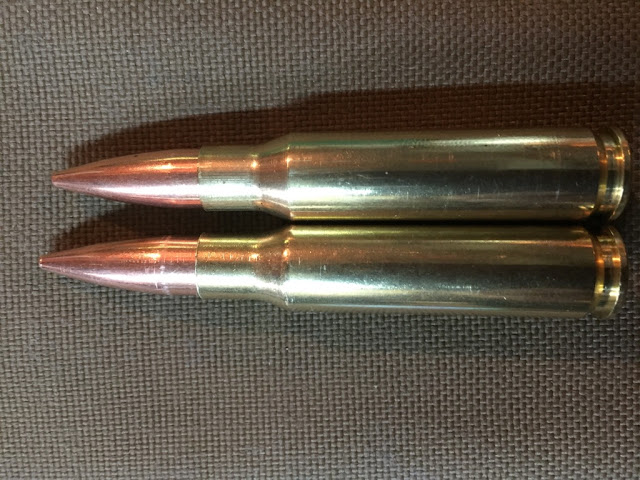 The one on top is one of my standard practice shells and will cycle through the magazine.
The one on the bottom is about .0048" longer
and should be more accurate if my theories hold.

There's no guarantees with any of this monkey business. I have friends that swear it's a pile of hooey. But I had a Ruger No.1 that absolutely loved ammo with bullets seated as far out as they could go, so who knows? Every rifle is a law unto itself.

Of course, this in turn raises other monkey business. With the bullet seated out further, you have more room in the case, which means lower pressures and lower velocities. If this works I will probably have to bark up my powder charges a smidge and who knows what that will do?

I am hoping to get out to the range today or tomorrow and we'll see what happens. We'll keep ya posted.