I've always wondered how bowling alleys work. When my Dad was a kid he worked as a 'pin monkey' after school to earn money for the family. Pop's family was fairly poor and all the kids had to work to support the family. The story (if I remember it correctly) is that Grandma would take everyone's earnings, take what she needed to run her household - and give back to the kids whatever she could. She was a Scots-Irish or something like that, and apparently their frugality makes the stereotypical jewish miser look like a philanthropist. But the upshot of all that was that Pop and the other kids set up the pins by hand.

One of the perks was that the pin monkeys could play for free after hours and Pop became a formidable bowler that could probably take Fred Flintstone to the cleaners. 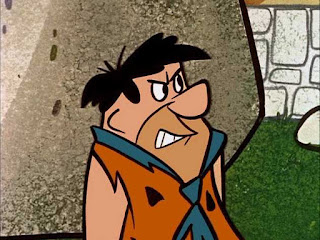 Yannow...my Dad even looked  like Fred now that I think of it...

I've been told by some snide family
members I resemble this fella.
Weep, ye mortals, for our fallen patriarchs

Bowling was a big deal around Aaaaaadmontin back in the early 50's and the lore has it that when Pop stepped up to the line, every pin monkey in the city would start hooting and catcalling in simian rage because Dad could throw perfect strikes at will - which meant hard work for the monkeys.

I've always love the retro mechanical marvel of the bowling alleys, but sometimes wish I had been born back in the time of pin monkeys.