"So how does this work, exactly Dennis?" Marty asked. Something awful was always going on in Dennis's gargage, it seemed.

"It's an epoxy/resin type compound of some sort," Dennis explained. "When it sorta sets up and gets tacky, you grab onto it and hold it with one hand, and slide the tang end of the blade into the glob - like so -" Dennis reached for the squishy black mass on the aluminum foil, and firmly gripped it with his right hand. Then, deftly and carefully, he slid the tang of the knife blade into the blobby glob. Cigarette smoke started getting in his eyes, so he spat it out as he held the mess together awkwardly with both hands. "When it sets up, it'll fit my hand like a glove! Or... it's supposed to..."

"I wouldn't be caught dead with a blade that looked like that. That epoxy stuff looks like a great big black turd with a knife blade sticking out of it..."  Bob said. The men all cackled and laughed with delight. For all the world, this home made knife did, indeed, look like a piece of turd. "Wouldn't be too sure a that, Bob. With your ropey mouth, you may very well be found dead with this fine blade sticking out of your gizzard!" The men dissolved into merry laughter again. After the chuckles stopped, they sat in companionable silence, smoking and watching Dennis futz with his home made knife. He'd blowtorched the basic shape out of an old saw blade, and then carefully filed and shaped the blank as best he could. He was learning new skills, and his equipment was less than perfect. He'd even nigger rigged a forge from the deck of a junked lawn mower and his young wife's stolen hair dryer. (She was still madder than hell about that). The men had saved the garage from burning down when his first quench had gone horribly wrong. They still joked about that, too.

After awhile in silence, Marty sighed and knocked the dottle out of his pipe on a  bench vise... and pointedly looked at Dennis. Dennis avoided Marty's eyes and flailed around for something to say. Marty sighed again. "Dennis-"

"You arseholes will rue your nasty comments about this fine blade! When I die (and join you boys in hell), my sons will fight pitched legal battles with judges and lawyers for possession of this fine family heirloom -" Bob was chortling, trying to ease the tension that had suddenly reared up among the friends.

"Dennis!" Marty interrupted sternly. "What did the doctor say?" he demanded. The men all fell silent. Nobody wanted to ask the question. All wanted to know the answer. Dennis sighed and hung his head.

Setting his beer firmly on the workbench, Marty asked, "How long?"

"Dunno yet. There's more tests, and another doctor's appointment on Monday..."

The friends fell into an uncomfortable silence, and made a show of fumbling for cigarettes, matches or beers. Nobody would look at anybody until they had their poop in a group. It was an awkward silence for a few excruciating moments. Bob recovered first. He farted loudly, and asked, "Are you going to make a leather sheath for your blade, Dennis?" Sam and Marty retched and gagged in disgust and relief.

Jeff and I sat in the blazing afternoon sun doing what teenagers do best - loafing and goofing off. I lobbed a half-dead tennis ball to the back of the yard, and Jeff's dawg went barking after it. We had to watch our money because we had dates on Friday, and couldn't afford to do anything fun or worthwhile other than hang out. So we talked about girls, guns, cars and the usual horse chit that young men obsessed over. Do you remember how the world stood still on summer afternoons like that? Our goldbricking was interrupted when Jeff's mom opened the back door and called, "C'mon in for a second, guys! I have something here for ya...!"

Jeff was a big boy and stood up to his full 6'6". People who knew said he looked like his old man. His little brother threatened to be a big man too - and had started a growth spurt of his own the way older boys do. As for Jeff - you could clearly see the man in him, and the kind of man he was going to be.

"How can you guys stand it out there?" his mother said. "There's some pop in the fridge, and a box on the table for Jeff. It's some of your Dad's old junk that was sitting in Grampa Marty's garage, and he got tired of tripping over it." A hitch caught in her voice, and she coughed to cover it. "You need to clean up that dump of a room before you can fit any more junk in there!" she scolded. She grabbed up a full laundry basket and fled for the basement.

We both eagerly peered in to the box... and what a treasure trove! There were some military badges, a battered zippo, old wrenches, hammers and tools, some  7-1/2 12 guage shotshells, tent pegs, an old battered camp stove and all kinds of plunder.
"Holy shit!" I gasped.

I pulled a huge knife out of the box, in a stained and ratty leather sheath. Rambo's knife was smaller than this thing! Crudely carved into the leather were the owners initials - JDS. "The handle looks like a black piece of turd," I said, passing it over to Jeff. "It must have been your father's," I said in a flash of brilliance.

Jeff took it and unsnapped the strap and slowly drew the blade out. Years of neglect had left the leather sheath tattered and beaten, and the blade pitted with rust. "And lookit!" I marvelled, "It fits your hand like a glove!!!"

I was still a kid too, I guess, with the lack of awareness and social cluelessness that would plague me for the rest of my life. I was shocked when I looked up from the knife at Jeff, and saw tears silently rise and fall from his eyes. I suddenly realized we were looking at far more than just a box full of cool junk. Jeff's father had passed when he was young boy.

"C'mon out to the farm, Jeff" I said. "We'll see if those shotshells are still any good - or maybe you will want to save them for grouse season? And we'll talk to Pop. He has a wire wheel for the bench grinder that will take that rust right off it. When ya get the worst of it off, I think ya start buffing it with steel wool to shine it up... and Pop has that too... he will know what to do with it...". Growing up without a father was hard on Jeff, so in a pinch I lent him mine. Often. Things like that look different to you when you're a kid, it made perfect sense to us... I wonder what Pop made of it? He never said, he just did his thing and grumped at all of us the same way, and helped us all out the same too.

Jeff said nothing as he gathered up the big box and carried it out to the truck - he almost seemed as if he were in a trance as he coped with this unexpected find.

For all his size - you could still see traces of the little boy that lost his father far too early in life too. 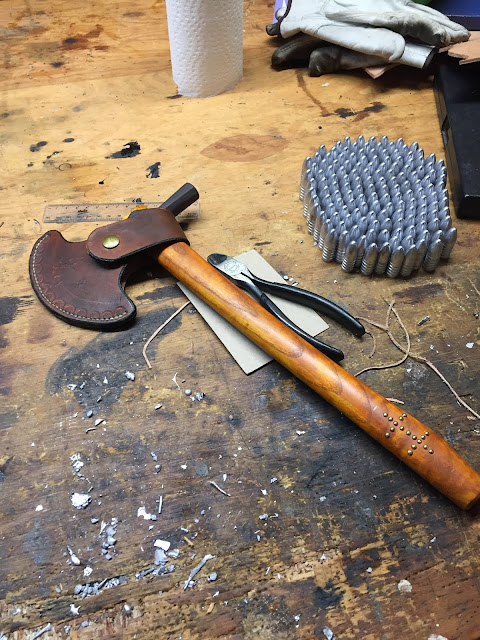 I wonder where you will end up, years from now?
🙂