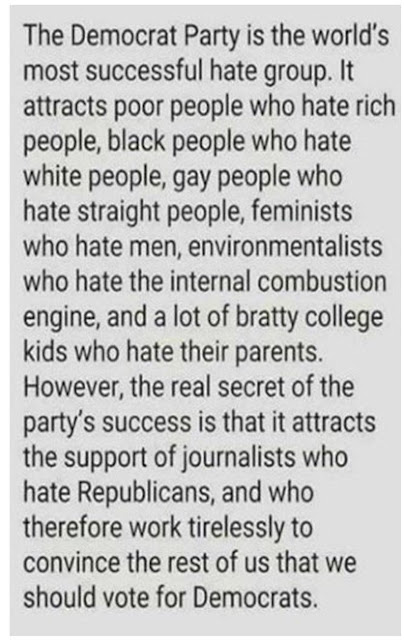 Living under a rock as I do, I miss out on a lot of the lingo, buzzwords and slang that the cool kids all have down pat. For those of you as clueless as I am, D3R is dissident-speak for “Democrats Are The Real Racists”. So it goes up here in Canada too.

I am in the game enough to have known this for some time. The shitlibs in my family would do or say something racist or stupid or hateful... and I used to gear down, explain to them how they were doing exactly what they claimed to despise... and they’d just giggle and shrug and do something else equally hypocritical. There was no reasoning with them. Eventually I figured it out - they knew it too and didn’t give a shit. As long as they got their way, everyone else could go pound sand. They inevitably reach a point where they are the ones that need to be told where to go and how to get there.

Apparently there’s still a lot of people that are shocked by this and I see them wasting their breath trying to get a fair shake and play a fair game with assholes that are basically cheaters, liars and thieves. The same way I used to years ago. It’s infuriating to watch as the same guys try to convince the same assholes with the same arguments that have failed the same way for years.

Everybody has to learn at their own pace, I guess.