Faggots And Morons On Their Knees 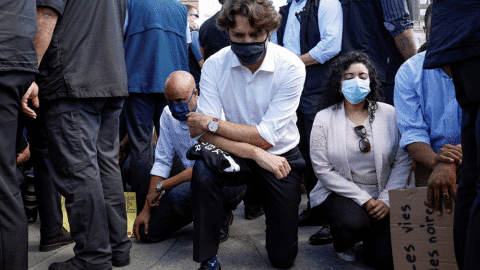 It was just a matter of time before Prime Minister Soyboy took a knee with all the other cool kids. I don’t understand this - and yet I do, too. Racists don’t hate blacks as a group because of the colour of their skin or physical attributes. Or, maybe some do, I dunno... but most of those guys I’ve heard hate blacks because they see them as stupid and violent. They hate them for what they do. All these violent riots with the looting and burning and murders... it’s complete justification and confirmation of their views. These shitlibs are getting their noses rubbed in reality ... and the only thing that will “fix” the problems is MORE social engineering, more liberalism, and more - ever more - forced diversity and vibrancy. It’s how socialists roll.

It works in his world. The vibrants in his circle are carefully selected, and hand picked for manners, intelligence and adaptability. The ones in his world aren’t the smelly, ignorant savages he’s trying to dump in your neighborhood. You will pay for vibrancy and diversity, not them.

Justin’s father was a piece of shit too. The lore I have is that when Canada’s vets were returning home  from WW2, Turdo the Elder dressed up like an SS Gruppenfurher and shouted insults at them and gobbed on them as they marched by in their ranks. When you combine the parentage with Justin’s own stupidity... it’s hard not to feel sorry for him sometimes. He’s a puppet of the globalists who are the only ones with any use for a boy like that. That tells ya something about our rulers.

I too come from a very liberal family. I understand how these people think ... and they won’t stop until the house is on fire and they’re all trapped inside. They’ll do their damnedest to make sure you burn with them... you’re part of the reason they set their houses on fire. Don’t throw water on the fire, you fuggin conservative idiots!!! Everyone knows a real fire needs gasoline!!! “Yannow what??. We have too many cops!!!! Let’s defund the police and give the money saved to the rioters!!!”

“Instead of cops confronting a drug addict... have a social worker do it...”

Oh, that will end well!!! I hope they defund the RCMP. At least they’ll be too busy to harass legal gun owners...😆👍

Have a good Sunday y’all! Don’t get the chinkypox when you’re out there protesting and bending a knee!
Posted by Glen Filthie at 11:30