Well, the latest neoliberal morality play is in the final acts. The martyr was sacrificed and destroyed by the designated villains: racist whites in general, and racist cops in particular. Their guilt was never in question, but you have to work the crowd with lots of blood dancing, virtue signalling and lofty public rhetoric. It plays well to stupid white people... and the blacks are absolutely charmed with it. The modern neoliberal narrative lets them loot, burn, and attack whites, and pose as both victims and heroes with their stolen flatscreen TV’s and running shoes. Shitlibs get to pose as crusaders and emancipators without any of that icky fighting stuff.

While it has played well to vibrant and diverse stupid people that come in all the frooty colours of the rainbow... the smart people finally seem to be getting wise to it. They’re vapour locked because those awful, awful racists that go round saying blacks are stupid and violent... are laughing at normies that are being victimized by mobs of stupid and violent black people.

The play here, of course, is to paint Trump as a dangerous racist lunatic that gets turfed in the next election. In American nomenclature, NOTHING is worse than being a racist. Even a vacuous geriatric with dementia would be a better leader than a racist Who Is Literally Worse Than Hitler. Who knows? The caper may work for the libs, it always has in the past.

Wrangling a demographic that is prone to stupidity and violence is dangerous business. I would have loved to have been a fly on the wall when the angry, filthy mobs formed outside the CNN building. Those guys have been an integral part of the neoliberal attack on the fabric of our society. It works the same way up here in Canada. In Canada, our niggers are red, but the principle is the same. The neoliberals pander to them and pose as great benefactors, and shower the natives with free food, free housing, free medical, free education and no taxes. The natives take all that and convert it into squalor and poverty and blame white people... and the libs try and focus that hate on conservatives rather than themselves. As the media slobs at CNN found out... it doesn’t always work out that well. 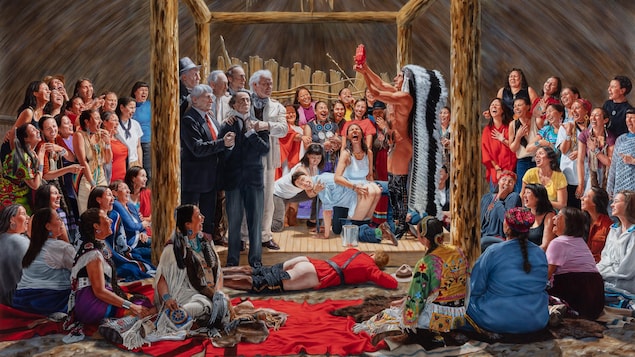 This portrait by a gubbimint subsidized local native artist says it all.
The First Nation freeloader wet dream is to bum yak white cops and PM’s
for crowds of angry squaws.
Turdo La Doo would probably enjoy it... until
the torturers got serious.
To vibrants... white people are all the same.

These noggers aren’t especially fond of shitlibs either. They will turn on their allies and each other in a heartbeat. Something has to give at some point.

My question is, if this does go hot... and I think it has to at some point at least for Americans ... what does Normie do? I hear some talk about emulating the “roof top Koreans” that shot rioting blacks that came to attack their neighborhoods. But the Leftie states have formalized their intersectionality to a high degree: because Koreans are vibrant and diverse, they’ll be allowed to defend themselves from predators. Will Whitey be allowed to? As we have seen from previous shitlib morality plays involving the righteous shooting of black thugs by white cops... the answer is probably “no”.

So does Normie pick up a gun and head for the hills? Or does he shelter in place and hope he doesn’t get bum-yakked by vibrant degenerates?
Posted by Glen Filthie at 11:00