I wish I could flip a knife around like the performance artists do. But that is just showing off. Real knife fighting is nasty business and the reality of it, so I’ve heard, is that if two skilled guys get into it, more than likely you’ll have two guys bleeding out in seconds.

Talking as a tard with no real knowledge of the subject... if I had to fight with a blade that classic Bowie would be what I’d go with. I love the looks of them but in real life I have never needed a big Rambo blade. I can do everything I need to do with a pocket knife except butchering. For camp work and field dressing game up to the size of moose... the little folders do just fine. But a fella needs a good fixed blade hunting hunting knife... and I love good clip point. It looks proper on the belt and puts me in the right frame of mind for camping and hunting season.

None of us tards can agree on this though. Big Jeff had a big skinner, Bob The Knob had his “nessmuk” blade (first time I’ve heard them called that), and Skinbag had a narrow flensing knife for camping animals out. They all worked.

If I had to be serious about social work with feral boons or chavs...I’d want the Bowie AND a good hawk. 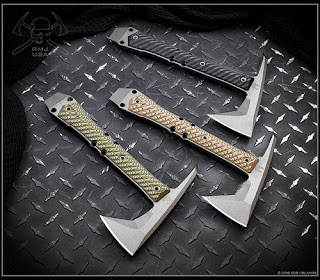 That’s more a spontoon than a hawk...
but if ya gotta have a knife fight, and ya can’t bring a gun...?