Our Women Are Nuts

It's all fun and games right up until some moslem monkey and his 18 brothers are sliding it up some idiot feminist's arse. 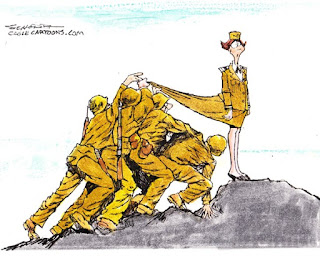 Yannow I sit back and look at the carnage women have wreaked in the workplace both in Canada and in the US. Productivity has dived. Profit margins have dived. Wages and salaries have dived.

Office politics are now toxic in most corporations. One quarter of our women are on anti-depressants and driving the other 3/4 of their peers nuts with their bullshit and drama. The church, family and community is collapsing everywhere.

And now, we want to put these same women responsible for all that - on the battlefield where, if they fail (or when they fail) - they will be at the mercy of some of the worst scum of the earth. These are grown adults pushing this chit too!

It seems to me that when humans get together their collective IQ drops by at least 50%. That is an accomplishment in the military.

This can only end one way, chickie. Remember - when you're getting reemed on Youtube by a mob of ISIL simians...you asked for it. But there I go...blaming the victim !!!!

Have a good weekend y'all.