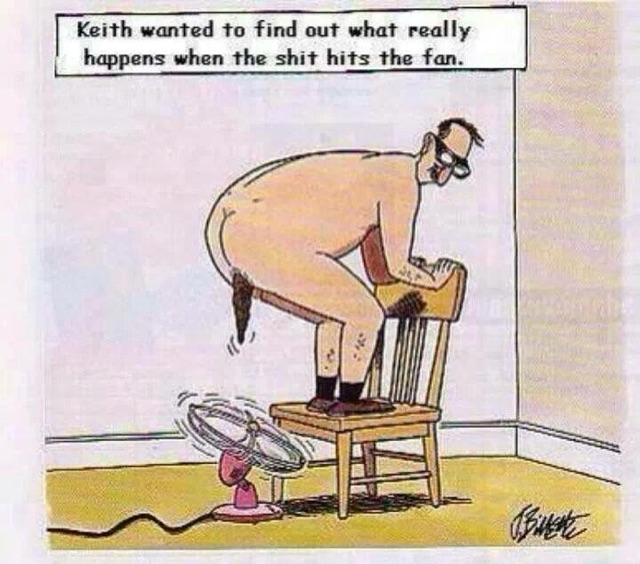 At this point the Gentle Reader is probably asking, "Is this going somewhere, Filthie? Ya farted at work, some cunned stunt and equal opportunity hire got her panties in a twist and ya got written up. BFD! Two computer geeks got fired and mobbed for making lame jokes about 'Dongles'!!!"

The point, Dear Reader, is to understand the context of the times. Back in those days, we laughed at stupid people and openly mocked them! The next question you might ask is,"You were THERE, Filthie...right when this PC crap was hitting the fan 15~20 years ago! Why didn't you DO something?"

For the record, I DID do something. At first I just laughed. I was working insane hours, while the women in the office showed up at 8:00 and left right on time at 4:30. Most of them were in bed sleeping while I was still at work racing deadlines. You can imagine my surprise when the management confronted me with an official reprimand from the highest circles in the corporation - for farting in the office. The night before that happened I had to stay late on a project that was closing and didn't leave the office till 1:30 am. I was tired, grumpy...and in no mood for bullshit like this when I was trying to finish a package potentially worth $300k US to the company. But if I wanted to keep my job - I had to sign a form promising never to fart at work or offend my coworkers again. I was just stunned - we were all adults, we all had pressing duties...and now I had to deal with this.

I signed off on it.

Unfortunately they left space on the form for me to add any comments I wished to make, and invited me to add another sheet if extra space was required. I buzzed the receptionist/HR fattie to hold my calls - and proceeded to explain my side:

I would like to apologize profusely for my unprofessional conduct. Unfortunately, though, flatulence is a part of the culture in which I live. Some of my peers consider it an art form. Others in my ethnic community find it actually relieves pain, as do I. Nor am I the only one in the office that feels this way.

In point of fact, my coworkers have done the exact same thing on several occasions and then denied it afterward! Jessie is the worst offender in this regard, followed closely by Leisure Suit Mary. I feel that I was unfairly singled out for punishment and reprimand - and would like to formally ask the management to redress this issue as quickly and professionally as possible.

To put this in perspective, e-mail was just becoming commonplace at the time. I scanned the document, attached it to the e-mail - and sent it to The Gruppenfurher - and copied all my friends in the office too.

That is when the fit hit the shan!

The email went viral in a time when the phrase 'going viral' wasn't even invented yet. People in the company all over the world began to respond - and the responses went viral too. E-mail jokes were made about how women didn't fart. Some wank wrote a heartbreaking piece on how my epic ripper induced PTSD and the hilarious symptoms...and signed Leisure Suit Mary's name to it. S+K in Britain claimed one of their employees broke all the records that my fart had set - and then had to retract it a day later because the athlete was caught eating performance enhancing foods like boiled cabbage and navy beans. That set off a veritable company shit storm as more viral jokes started flying around about British food like 'spotted dick' and 'faggots n' peas' and other ethnic culinary horrors. I got a job offer from the Jet Propulsion Labs in Pasedena - they wanted to take advantage of my expertise in controlling and directing superheated and ionized gases...and the management was stunned the derisive laughter coming back from the proles and peons.

Jessie was livid. She nearly flooded her panties with rage when she saw that I had printed off a copy of the reprimand, framed it and posted it on my cubicle wall. She just couldn't grab the relationship between a frivolous reprimand and my mocking laughter that came back. Of course everyone thought it was a joke!

Clearly something had to be done. and this time the Gruppenfurher brought down the hammer. Leisure Suit Mary got a reprimand for inappropriate use of the office email - when she didn't even write the letter that was forged on her behalf. Others got written up for inappropriate behaviour and other bullshit infractions.Yeah, I got the message Jessie: if I don't bow down to you - you'll go after my friends too. Nice. I got a second reprimand telling me that if a third was necessary, my pink slip would probably accompany it. And by the way, Filthie...be a pal and sign off on your acknowledgement of your second reprimand too.

When the second reprimand came, I sat back and took stock. I firmly pushed my anger down and tried to look at the facts dispassionately:

- Jessie wasn't fit to manage. She had gotten her job because of a big rack of fake tits, a natural ability to guile and charm men, and something new: affirmative action and equal opportunity. Bottom line? No matter how hard I tried, no matter what successes I achieved,  Jessie was going to be my boss, and I was almost certainly stuck in a dead end job. (Assuming I didn't get fired because Jessie was menstruating or having boy issues).

- it wasn't fun any more. I no longer had control of my work load, and for some reason the management thought I NEEDED Jessie to oversee my work, check it and approve it. Except, of course, when I was working overtime late into the night.

- on top of that, the work load was increasing. I didn't have time to write reports to Jessie in excruciating detail describing my workload and activities...and I was already working 60~70 hour work weeks.


I decided the time had come to man up. I took the reprimand (unsigned), asked The Gruppenfurher for a moment of his time, and had that man-to-man chat none of us like to have. I asked him if we could settle this in a reasonable manner off the record. He told me to go see Jessie. That brought up problem number two. One way or another, Jessie would no longer be my boss. I was told that this is the way it was, I could either go with it or pack up my stuff and leave. It was a very short, very polite conversation.

After thanking him for his time, I left the Gruppenfurher's office, went back to my cubicle and set the reprimand down in front of me. I thought about my mortgage...back then it was still big enough to give me nightmares. I had two vehicles I was paying off. I would have preferred more money in my 'Fuck You' fund...and then there was Leisure Suit Mary and my friends. When I left my workload would fall on them, and they were like me...barely treading water as it was. These are the kind of things you think about when you're thinking of pulling the EJECT lever on your career. The responsible, smart thing to do would be to swallow my pride, sign the fuggin reprimand, toe the new company line and get back to work and forget it.

I picked up my pen, and in the comments above the signature line - I drew a great big cock, scanned it, and copied it - and emailed it to the management, my friends and the fatties in HR. I went back to shipping and receiving and got a can of aerosol glue and took it up front. I sprayed the back of the reprimand with the glue - and stuck it to the fabric wall of my cubicle.

I piled my work up and sorted it. I walked into Jessie's new office, dropped a massive stack of paper in the middle of her desk - and told her these packages were all due this week. I turned my back and left her clucking and screeching. Mary knew what was going on the second I walked out of Jessie's office and I felt like a shit as her eyes filled with tears. We were friends but she wasn't sad to see me go, she was unhappy because the vast bulk of my work would now fall on her and she was going to have to work insane hours now too. It's hard to see good women cry, and I managed to croak out that I was sorry. I felt even worse when she tried to give me a smile around her tears and fatigue. Others looked at me like I was nuts and whispered behind their hands as I walked out. It's a small industry as well as a big one and word gets around when you flip off your employers. Was I making a huge mistake? What was in my future now? I drove home on autopilot, in a fog of fatigue and worry.

When I got home I looked at the grass. It was a foot and a half tall and would need a tractor and a baler to cut it! In the house, I looked at the piles of dishes I hadn't had time to clean. Old pizza boxes and fast food containers littered the house. The only thing missing, I suppose...were the rats and cockroaches. Looked like I had to clean up and square away some other aspects of my life that had slipped because of the job, but that could wait. It was about 10:00 in the morning - I had all the time in the world now - so I poured 4 fingers of Highland Park, slammed it, and went to bed.

Stay tuned for the third and final chapter of this exciting saga! Same Bat-Time! Same Bat-Channel!