A man's best friend is his dog. I will brook no dissent on this assertion, and any that wish to protest will be banned and then shot as traitors. Being a manly sort myself, I need two dogs: 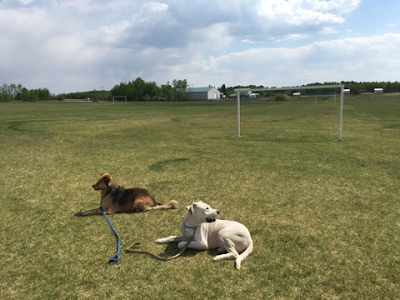 The brown one is Macey. She is a pound puppy that has an IQ higher than most liberals and by extension - most women as well, HAR HAR HAR! HAR HAR HAR!!! The white one, I'm told, is a Great Pyranese. I shave him bald in the summer but usually he is a wooly, foul smelling farm dog that also came home from the pound. In contrast to Macey, Mort is as dumb as a post, can't do any tricks or follow commands and he slobbers and poops ... a lot. Somehow - he is the best dog I've ever had in spite of all that. He is a crapping, stinking love machine and pretty much everyone that meets him loves him in spite of his hygiene and intellectual problems.

A man's second best friend is his rifle. This is a topic that has caused more fights and black eyes around the campfire and at the rod and gun club because men cannot agree on what the attributes of the perfect rifle are - it's like trying to define the perfect woman or the perfect dog. The young fellas will usually lean toward the flashy big booming magnums, but they can be tricky to get to shoot well and any extended range sessions with them are NOT fun.  Others prefer the latest and greatest proprietary cartridge guns from any number of a growing list of manufacturers. As I got older and wiser - I began to formulate the properties  that would define my version of The Perfect Rifle.
My first perfect rifle was a plane Jane, chit house K98 Mauser made by Brno in Czechoslovakia. Mine was an Israeli capture - after WW2 Germany was disarmed and all it's surplus guns were dumped into the fledgling state of Israel - which was fighting for its life at the time. They took these guns, rebarrelled them to .308 (7.62 NATO, same thing) - and pressed them into the hands of the soldiers as fast as they came out of the armoury.

Cheap, deadly accurate, and fun to shoot!
I didn't make much money at the time so I really appreciated the economy of the caliber. I picked up fallen .308 brass, and reloaded it without regard to headstamp, trim lengths, or condition - and shot for years like that! With my younger, sharper eyes I could keep the rounds inside a 4~5" circle at 100 yards...offhand!  With iron sights, that's not bad...and many shooters could do better.
A few years later I fell in with some serious gun nuts and hunters. Bob The Knob was crazy about guns and even developed his own rounds for them. He pressure tested them and developed loading data for them and he got the gun bug worse than I ever will. In any event...I needed a better rifle to shoot with such men, and found it in the elegant Ruger No. 1 rifle in .25-06. 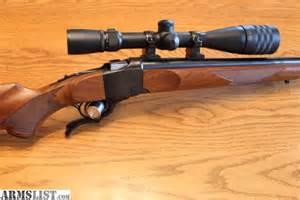 With a rifle like this, one shot is all you need.
With a 3x9 Bausch & Lomb scope this gun came in a package the length of a Daisy Red Ryder BB gun. With the bull barrel it kept all it's shots in a 1-3/4" group at 300 yards off the sand bags. Because it soaked up recoil so well, I could usually keep my offhand shots in a 3~4" circle at 100 yards - and I started hassling the pros at the shooting matches and at the rod and gun club. Bob introduced me to moly-coated bullets and with 58 grains of IMR 4350 gunpowder - this beast could push 85 grain bullets to about 3500 feet per second across the chronograph. Every animal I shot with that rifle went down with one round and all were dead by the time they hit the dirt! At a metallic silhouette shoot I came out of the shadows and sandbagged about 15 serious shooters to take third place in the northern Alberta regionals. Everyone wondered where in hell this fat new kid came from...and just boggled at the accuracy of the rifle. I reckon my shooting sold at least 8 guns for Ruger and if this was a fair world I would get a commission! HAR HAR HAR!
I lost count of how many POUNDS of IMR4350 went down that gun's gullet. I shot it hard for twelve years. After that kind of shooting, the barrel's rifling and throat slowly erodes, the velocities fall off and the groups open up...and one awful day I discovered I had a burned out rifle on my hands. I almost wept real tears when I had to accept that the days of this little gun were over. Oh sure, you can re-barrel them and sometimes they will shoot as well as they did before - but with single shots of this type...that was a crap shoot at best. I retired the gun and gave it to my friend's son. It still shot plenty good enough for deer hunting...but its days as a tack driving match gun were long over.
I wandered the forlorn hinterands of Gun Geek Forest for a couple years after that seeking a replacement. I bought a Remington SPS Tactical bolt gun and hated it. I put a Benchmark match barrel on it and it still sucked balls. I figured I would try retirement out with a black powder cartridge gun - but couldn't handle it. I am too young for the geriatric BPCR crowd, and do not warrant the respect their age and skill does. I slowly started losing interest in shooting altogether until one day I ran into a nice fella up at the Grande Cache club who introduced me to the Springfield Armoury M1A. 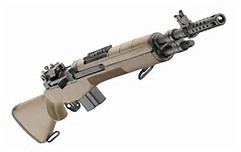 Ten-HUT!!! Officer On The Range!
This is the civilian variant of the old M14 rifle. Recoil? It's just enough to let you know it's there! Mine had match iron sights but I mounted a Swarovski scope on it. No need to develop a load for this gun - it's already been done for us by the nice homicidal fellas of the United States Marine Corp! The friendly murderers at Quantico tell us that 41.5 grains of H4895 yields around 2700 FPS with a classic Sierra HPBT bullet. My chronograph and rifle agree - I get about 2650 with that - considered just about optimum for this rifle. The rifle is a joy to sling up with, but it is a complete shrew with brass. Only go four reloads and then pitch the brass, boys. Having this sweetheart blow up in your face over a 30 cent piece of brass just isn't worth it. This rifle is the gun of choice for the old stubfarts competing at Camp Perry and has recieved the endorsement of one of the finest men alive: 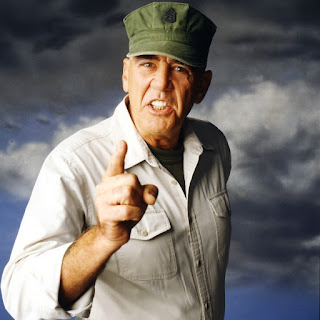 If there are any unauthorized watermelons around CFB Filthie, now would be a very good time to square them away...
If you're not hunting this weekend - make sure ya get out to the range and make a point of shaking hands with your second best friend. You'll be glad you did.  :)
﻿
﻿
Posted by Glen Filthie at 10:32