Put on your 3D glasses for even MORE terror!!!!! 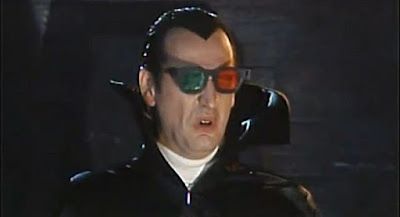 "Vibrants in outerspace?!?! Scarier than the blood sucking monkeys of Melonville!!!"

I probably don't spend enough time on Popehat. Like Uncle Bob's Treehouse, everything there is up for debate and it's all fun and games until some monkey inevitably gets his tail stepped on - and then the shrieking strarts and the dung flies! Try and keep your popcorn covered... I'm still laughing. The story is about two bloated gas bag future politicians fighting about whether obviously violent migrants are violent or not - and then the first thing in the comments, some lower order primate pipes up and dares the rest of the baboons in the troop to prove moslems are violent! HAR HAR HAR!!!!

Speaking of Hitlerites and racist offensive monsters from Inner Space, Vox day sees a silver lining in the idea that when the next influx of moslem vibrants gets settled in and comfortable - they will probably attack America's eeeeeeeevil jooos first! No, I don't think Vox = Adolph Hitler (Hitler was much smarter than Vox) - but ol' Voxxie has a way of manipulating stupid people that Hitler would approve of. 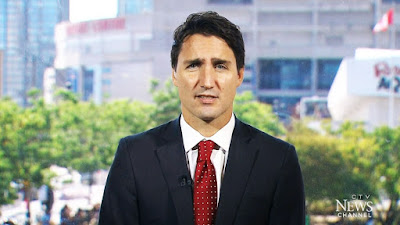 Wanna see something really scary? This idiot thinks we can import 20,000 illiterate, low skill/low IQ moslems in Canada without any security worries. CSIS and the RCMP agree with him.
Like Vox, I agree that along with the illiteracy, resentment, racism, and homophobia that little Justin wants to bring into Canada - there will be an element of terrorism. Perhaps we see the same thing different ways but it seems to me that while moslems may strike at Jewish power from time to time abroad - they ALWAYS seem to strike at liberal bastions of power too. It always seems to me that the people pushing this multi-culti BS are the folks that live in protected enclaves where they only see one side of the issue. Everyone likes the well spoken, educated and otherwise clean cut brown fella with the turban. They don't have to work with the sullen, smelley ignorant mudflap that won't speak English. And - when moslems go wild, they tend to unload their guns on the very liberal morons that would otherwise stick up for them.
As a kid I had a crappy sweatshop job working on the shop floor assembling electrical switchgear. We were an 'equal opportunity employer' which meant we had Vietnamese and east Indians and whites - and the groups pretty much self segregated. The whites got along with both groups to a very limited degree, but the east Indians and the Vietnamese loathed each other and were always in a state of barely suppressed civil war. One day tempers flared, and the two groups went at it and the punches, kicks and blood started flying - and I just backed away and smiled. The Vietnamese kicked the living crap out of the east Indians, but one of the nine irons went to the hospital after having a running drill shoved up his backside! HAR HAR HAR! How do ya do something like that? The dust had just settled on that monkey house riot when the idiot plant manager decided to replace the wounded east indian with a new one - and hired a sikh. Nothing wrong with that, right? Sihks are brown, and he would be working with other brown fellas so what could possibly go wrong? Well, we learned (the hard way) that Sikhs and hindus don't always get along due to religious differences - and Mudville erupted in violence again! HAR HAR HAR!!! The wages were chit - but the entertainment was first rate provided you could stay out of the cage when the monkeys went at it. In any event, that was my first exposure to multiculturalism - and if I had my way, trust fund babies like Turdo La Doo and his fellow elite fart suckers would have to work at least two years in such an environment before being allowed to serve in gubbermint. Liberal views of multiculturalism are not based in reality.
Justin has just killed Canadians with the decision to import these migrants, and he damned well knows it too. Or at least, his handlers do. My advice is buy a gun. It is better to have one and not need it than need it and not have it.
,