The other day the new NDP (commie) bubble heads - were prattling on about the need to go down and get a flu shot - and their lickspittles on the CFBC (Canadian Fuggin Broadcasting Corporation) did a photo op where Alberta's new Health Minister was setting an example for all us ignernt unwashed rednecks to follow. The flu shot is free, dontchyaknow!!!! Sarah Hoffman smiled for the adoring CBC scum running the cameras and bravely rolled up her sleeve to get the shot. 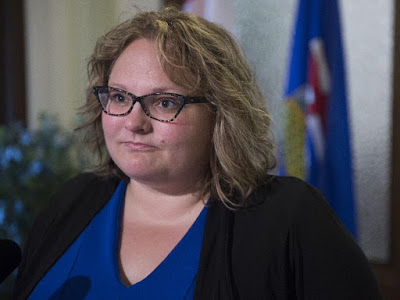 Ahhhh! Reminds me of my elephant hunting days while on safari in Namibia....

And what are this lady's credentials that make her the best possible person to represent out gubbermint on health issues...? I was amazed they had a needle long enough to get down past all the blubber!

Sigh. Now I am no lightweight or athlete. I am overweight, I'm old and I know I have to lose weight. So don't bust my balls about living in glass houses because I will cast the first stone as far as that one goes. I know what I have to do and make no bones about it.

Does this chubster? If you really want to lead on health issues by example, Sarah - how about you go on a diet...? This is the kind of crap that passes for intelligent thought among the NDP.

We are so screwed.

In other related nooz - The Biggest Dog ****er In The World - our shipper/receiver - put in his notice today. This guy will be a huge loss to the company. When he isn't screwing the pooch, he's outside smoking and schmoozing with the truckers or talking with anyone that has the time of day for him. Apparently smoking three packs a day qualifies him for a new job at the University Of Alberta as an occupational health and safety administrator at the U! Needless to say he is a big NDP fan. Apparently the U has an expanded budget and is doing all kinds of hiring! As for the rest of us he leaves behind, if the economy goes the way I think it's going to go - we will all be lucky if we have jobs next year.

Who was the Roman Centurion that said it all those millennia ago? "The Gods piss upon us!"
Posted by Glen Filthie at 16:24