I Have Been Banned...

...From commenting at pretty much all the major Canadian nooz outlets and probably a few of the Murkin Ones too. I don't care or feel bad about it because like The Glob & Pail - most of them use politically correct trolling to increase their circulation and generate controversies that aren't controversial at all. When they troll me I troll them right back and it drives the neurotic leftists nuts. Then I get banned for trolling and not contributing to intelligent conversation, HAR HAR HAR! Sue me, morons - it is still legal to discriminate and offend stupid people so liberals are stuck with what they get! HAR HAR HAR! Supposedly 'Canada's Newspaper', the Glob & Snail these days pretty much panders to inner-city Tranna - the gay hipsters, the greasy elderly hippies (see our premiere below), the militant lesbian feminists and the usual disturbed flakes and weirdoes that are all too common there. Out here in the real world - people are already losing their jobs. If what I think is going to happen - happens - people will start losing their homes by next year. 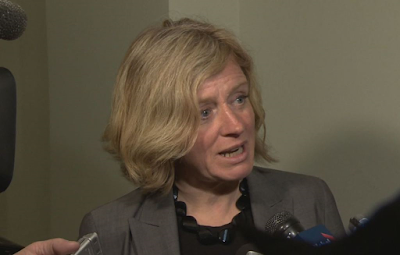 Bringing you the gov't you deserve, Alberta...

The avalanche of pink slips hasn't even started. It was either Cenovus or Syncrude that had planned on 700 layoffs because of the slumping world petro-economy...and when they heard Motley's budget they kicked it up to 1500. That may not sound like much but for every man the eeeeevil Big Oil lays off, 4 or 5 more in supporting smaller businesses lose their jobs too.

We were having coffee on the weekend with a younger couple that we just adore. He is a process operator for one of the big companies, he is sharp as a tack for the most part - and she is a stay-at-home wife who keeps their tidy little hobby farm running like a Swiss watch. She is pretty bright too - but they are both leftists. I'll be damned because I see this a lot and can't explain it. Lefties and liberals hate three things in Alberta: Big Oil, Big Business, and the military. And yet - lefties infest and thrive in these areas of our economy. My young friend is furious with the oil companies because they are laying off - and all I can do is laugh. What do you EXPECT them to do, dumbass? That woman, along with her cabinet of school teachers, activists, cocktail waitresses, and imported vibrants think that they are entitled to other people's money. When you steal from people they either do something to protect themselves or they leave and take their money with them. It's literally that simple. I tried to explain to them that companies don't LIKE laying off - they actually want to HIRE more people and do more business - but unlike Motley and her ship of fools, they need to justify the investment with some kind of return. I was dismissed as a right wing tool. As you might suspect, they like me but don't respect me! Can't blame 'em for being good judges of character, HAR HAR HAR!

But, they have a lot to lose. A sweet little hobby farm with horses, with a big house and a shop? That is a black hole for money right off the bat! To add to their peril, he is worried about his job and as he should - he is one of those eeeeeeevil rich people that Dippers hate so much. If he loses that nice cushy job with the fat pay cheque, I honestly can't see them hanging on to that property for long.

This will be my third Alberta recession. Depending on how stupid Rachael and her motely crew are...it may be my first depression as well. I'm seeing the big Ford F350's going up for sale everywhere because people can't make payments on them. Soon they will be walking away from their homes. Will my young friends get caught in this crunch? Put it this way - I wouldn't bet on their chances. My wife and I have no debt, the house is paid, we have a little money in the bank provided that the gov't doesn't steal it as they did in Greece. I am buying silver now and you should too. Not much, just dribs and drabs at a time.

If I were king of Canada I would make it illegal to loan money to leftists. They don't understand that loans have to be repaid, and if you force them to pay back the money they've borrowed they think you are picking on them. How can such people handle a pay cheque, much less a loan?
Posted by Glen Filthie at 06:24