Which means, if you are a younger fella, it's time to get pished to the gills, chimp out, and hope you don't wake up in the p-tank down at the police station tomorrow.

Don't get the top shelf stuff down for this lot - they will drink whatever's in the jerry can....and sorry about your Treehouse Uncle Bob!

As a younger fella I was never prone to chimping out like that - but pouring booze into some guys is like pouring booze on a fire. I never understood that - alcohol makes me talkative and lazy. The worst I ever did was fall asleep outside beside the campfire on a fishin' trip - and couldn't make it to the sleeping bag. I had one of those ultra-comfortable new-fangled-circular-fold-out camp chairs and a cooler to prop my feet up on - and had the guys at La-Z-Boy beat seven ways to Sunday! I slept like a log all night and woke up covered in mosquito bites. I think I got siphoned for at least a couple quarts! I got up, puked in the bushes, then sat back down for a 'hair of the dog' at 6:30 in the morning to top up my fluids.


GAH.
Murphy and Darwin still stalk me but I am older and wiser now, and I take my booze very seriously. Of course booze is all a matter of taste and opinion and for me - I never developed an appreciation for Irish whisky because the few bottles I did have were unspectacular. The Irish have a nasty habit of triple distilling their whisky and for some men the stuff is ambrosia...but for me that third distillation kills the soul of a good malt. I wrote off Irish whisky wholesale - and in retrospect that may have been a grave mistake. One day I broke with my bias and bought a bottle of this: 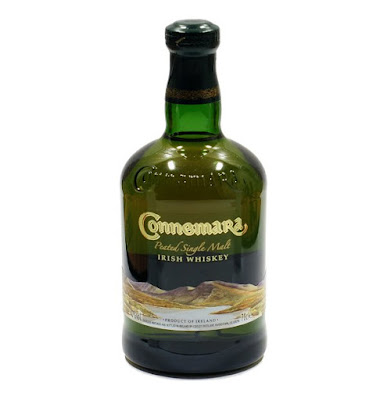 Drop what you're doing. Now. Get out your wallet, go down to the liquor store and buy a bottle of this. Yes, it's that good. You may want to buy two. Maybe even three - one should be in your saddle bag for those colder rides.
I love Connemara. And I'll be damned, I woulda never have thunk the Irish would produce a single malt that would blow my beloved Scots right out of the water! Start with their standard bottling - I can't speak for their special bottlings that are all the rage now...but let me say this about that - I found a bottle of Connemara Cask Strength and put it in my collection. I know that a lot of the high test beers can get really manky - but that is not necessarily the case with high test scotch. I am not a big fan of Bowmore but bought a bottle of their cask strength rot gut about 10 years ago and it was superlative. I haven't seen it since and if I DO ever see it again I will buy two bottles - one to drink and one to hoard!!!
It's pay day. The bills are all paid, the family miser banker is happy. The guns are well stocked with ammo. I have a few coins left over with which to indulge myself!
Life is good. See ya at the liquor store!﻿
﻿
Posted by Glen Filthie at 07:19