One Of The Biggest Epic Fails Of The Manosphere...

...is in the area of fatherhood and mentorship. The Captain trips over his dink in this exact fashion.


When it comes to schooling young men the Captain is about as good as it gets and lord knows - he has his limitations. When it comes to self interest, economic common sense, and self improvement...he is right on the mark. When it comes to women...oh boy.  Again, not to slag him, he is about as good as it gets in the Manosphere and you can do a helluva lot worse. Roosh is a laughingstock as far as I'm concerned - I consider him the Pied Paki Prince Of Polygamy. He's good enough for the mudsharking skanks but any woman worth her salt won't give him the time of day - nor should any worthy man, actually. Vox Day understands the modern feral woman but does not understand manhood. When I pointed out to him that by his own definitions, his own son is a gamma male...(which is the most contemptuous of men according to him) - I got banned from his blog! HAR HAR HAR HAR! He's great for social commentary, but anyone older than 14 with a triple digit IQ can see that the man is small, petty and vindictive. There's others - but the long story short is that for most of those guys, they stop learning at 25 and have nothing to offer a man older than that. Most of them couldn't handle a successful marriage or fatherhood and sniff in disgust at the thought of assuming the responsibilities of the family man. Yes, marriage is a crap shoot, yes, you can get seriously burned - but the alternative is to refuse to grow up - which is what a lot of what the cellar dwelling men of the Sphere are doing. 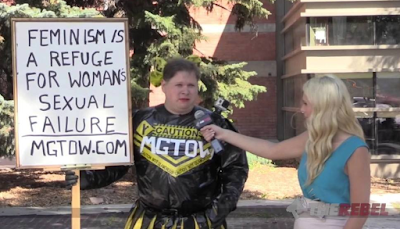 This is not a protest. It is a cry for help.
And of course the Captain and his fans jump on this kid with both feet, not understanding what they're looking at, not understanding what MGTOW is, and not having a clue about how to fix it.
What would the story be if that boy had a proper father or big brother? The Captain and any number of men will chit on him and mock and deride - how many of them would actually take the time to buy this young man a beer, explain things to him and set him straight? Throw a football jersey on that kid and get him on a team and he would have more action than any of those Manosphere pikers would. Get some meaningful confidence into him, get him out to a few dances and bingo - you have a perfectly good young man on the go!

It seems to me that there is a civil war in the Sphere over definitions and what they mean. By my reckoning - that boy is WAY to young to have the MGTOW mindset. I define it by the acronym: Men Going Their Own Way. The men that I have seen doing it did not adopt the philosophy by choice - it was forced upon them, often by foolish women that have neither their own or their partner's best interests at heart. While it is an unhealthy philosophy for the youngster - it is a balm for the older man weathering a divorce or a heartbreak. Such men need to get out of the game, do their own thing and get their heads on straight - and they will get back in the dating game when they're ready. It can take months or years - it all depends on the man and how badly he was hurt. It is a painful but healthy way to heal a broken heart and is probably the most noble way a man could go about it, too. The few MGTOW men I've seen would feel deeply sorry for that boy in the pic above.

The flip side of the coin is the PUA or the so-called Pick Up Artist that games women to get them into the sack for a quick "Pump-N-Dump" (HAR HAR HAR! I love that term!). Apparently nobody ever told these types that women are sluttier today than ever before, and even an ugly mug like Yours Truly could probably score on the first date if he was willing to sacrifice his self respect. The vast majority of women deserve better than that, and those that don't aren't worth the time of day. It is truly a pity that the boys of the manosphere will never see or appreciate the lost arts of flirting, seduction and courtship.

The Russians are way ahead of us on all of  this. In Russia, guys like Roosh, Captain Capitalism and Vox Day are rightfully seen as boys. Guys like me in their early 50's are considered young men, and the chieftains and leaders are mature men like Unca Bob over at the Treehouse. The Russians understand women too - and how to make the most of their many talents and strengths. Here in America, what little wisdom there is among our elders is ignored, and the virtues of women are either suppressed or discarded - and we shall pay in blood for it too!

The Manosphere has done well for the younger men - but it has failed to achieve any real relevance to those that eventually grow up.
Posted by Glen Filthie at 07:31