Thanksgiving, According To Hoyt

I like Sarah. Apparently she's a prominent science fiction/fantasy writer. (I wouldn't know - I gave up on that stuff when the genre became a pulpit for queers, feminists and Marxists to lecture from). Sarah has fought that social justice movement well, as have a number of other authors who want the genre to be about good story telling rather than politically correct fables. That is only one of this jewel's facets - she has led an interesting life and has some interesting experiences to share from time to time. I make a point of visiting her blog occasionally and so should you!

Being a focal point for fierce political battles is old hat for Sarah and she probably knows what she's talking about when she says this about politics over family dinners:

"If you have to counter, do it politely, tactfully, and more importantly with facts.  Feel free to counter with “yes, but–” And then change the subject immediately afterwards.  Feel free even to say “and now, lets leave contentious subjects aside, shall we?  This holiday is about family and thankfullness and the good things we have.”

Hmpfff. Yannow...that is exactly how my progtard relatives used to work when they orated, pontificated and bloviated about politics over family dinners. If I even opened my mouth they would shut down or divert the conversation and then come back to it once I learned that I was not to speak. Family dinners were for the liberals to lecture, and any icky conservatives like me were expected to listen respectfully. It was like that with everything.

Eventually my family shattered along political/ethical lines. Bridges were blown up and burned; lines of communication were cut;  lines were crossed; angry words flew like bullets, far too many found their mark...and none of it was good. Nor was it bad though, we all have our own lives and if I were to indulge in some American Thanksgiving - I am glad my in laws and daughter are on their own paths now and I wish them well. Cutting a family like that out of your life is like cutting a tumour out of your vital organs - it hurts but sometimes it has to be done. People deserve what they tolerate, and these are very trying and divisive times. I give thanks for the strength to bury the bodies and move on with my life too. I did not choose this path, it was forced upon me - but I intend to make the best of it both for myself and those that would share it with me. May you and yours do the same. 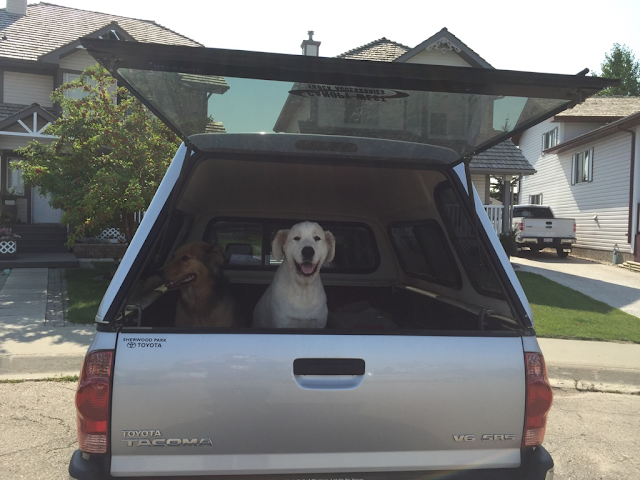 Dogs never give thanks. They accept happiness as their due and take it for granted. Sometimes I wonder if God didn't put that grinning idiot in the back of my truck in order to try and teach me something. Perhaps 'family' is something you make and not something you tolerate or are born into.
Happy Thanksgiving, Yanks.﻿
Posted by Glen Filthie at 05:46