The Sins Of The Father

What's not to like? Sanctimonious liberal university profs are getting run out on a rail by the monsters they created. The liberal media has been told to FOAD and stay away from the 'safe place' sanctuaries where the little dears don't have to answer any questions that may frighten or upset them. And the liberals that piss and moan about bullies and racism the most are now dishing it out so fast that they can't tell an Asian reporter from a white one. The laughter outside the university from the public and the layman is deafening - but the media can't hear it as their pantaloons fill with fright. As well they should - and the rest of us shouldn't take this lightly either.

These are the kids that have never been spanked as children. They were brought up where everyone gets a prize just for participating. There are teachers now seriously proposing that we don't grade and fail students because it is too hard on their self esteem. If I were King, I would tar and feather the people responsible for this idiocy and fire them off a catapault to see how well they fly. These kids are a chit stain on their parents, their teachers, and pretty much all of us too. The old nickel goes that you deserve what you tolerate.

I take this rather personally. Several years back my 20-something daughter decided that she was gay and promptly took her place as a full fledged social justice warrior.  Contrary to my detractors, I don't hate queers. I can hold my nose and tolerate them if they are courteous and respectful. I understand that a few are even capable of being respectable. But I will not tolerate nor abide the degenerates, the sexually disturbed and the attention whoring freak shows. 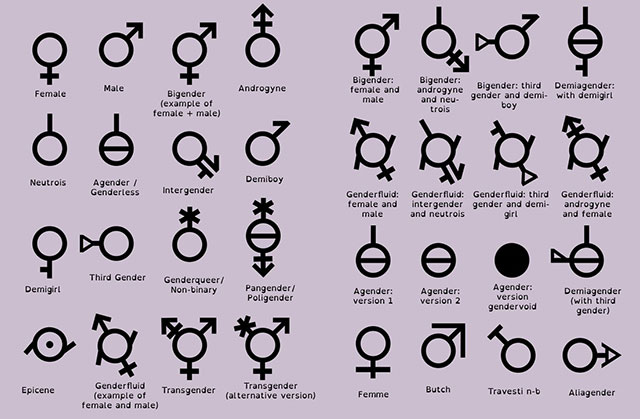 The 'Who's Who' Of Froots And Nuts! Collect them all and show your friends!
When she tore our family to shreds one of her motivations was that she had been "savagely and horribly traumatized" by her father - me. For months she said that and for months it tore me up inside as I struggled to think - why would my daughter say something like this? Did I do something awful to her without even realizing it? Could I really have been that callous and clueless?
In our last exchange I hammered her on that. Exactly how were you traumatized, my little precious princess? Were you beaten? No. Were you verbally abused? No more than other kids that run afoul of their parents. So what had I done that led to these accusations? She claimed that I didn't like queers. And she said it as if it was a damning revelation should shock the jury and seal my fate and earn me the most inhumane death sentence possible! It did, in a way - my shit bird progressive in laws jumped on me with both feet! They laid down the law on me too - recant and become a cheerleader for queers and The Princess - or be run out of the family.
One of the few things Vox Day gets right is his method of dealing with social justice warriors. You don't apologize, you don't negotiate or comprimise, and you don't back down from them. You reject them because they are wrong. Morally, intellectually and in reality - they are wrong. They mean to destroy and hurt you, and apologies only serve to justify them in their witch hunts and inquisitions. I told my daughter and my in laws that it would be a frosty day in hell when I would allow a couple creepy gay hipsters to dictate to me, and I told my progressive in-laws to take their hypocrisy, their double standards, their inverted morality and realities - and cram them..
And our family disintegrated as if it were never there. It's better this way, much as I hate to admit it. My daughter is still an unrepentant gay hipster and an ageing kidult and maybe one day she will grow up. Last summer I sat down with my in laws to see if we could patch things up but they promptly started the turd polishing, cheerleading and progressive white washing. I was told my assessment of my daughter was  all wrong! She was a successful young career woman - not a lazy, drifting 30 year old gay hipster with a part time job and no apartment, no car. "Ya don't need a car in downtown Vancouver, Glen! The bus will take you anywhere!" I couldn't believe my ears - when I told my progtard mother in law that not only does an adult need a driver's license these days - they need to be thinking about all those other icky adult things like RRSP's, bank loans, mortgages and careers! And no, a part time job in a retail sports shop was not a 'career'! Those morons looked at me like I was a monster from another planet. Long story short, they spoke to my daughter a short while later and stirred up another pointless family feud. At that point I told my poor, suffering wife that I was done. I couldn't take her parents' meddling in my family anymore and I laid it out for her too - she could go with her parents and coddle their precious princess ... or she could be a parent, stick with me and take the high road.... but she couldn't do both. I told my wife earlier this week she had to essentially choose between her parents and me. God bless her, I won that coin toss but I'm sure it was a very close thing. Sometimes being a mother and a responsible adult are impossible to do at the same time. Standing up to bullies and liars and cheats trumped coddling her spoiled abusive daughter - and I thank God my wife was made of better stuff than her idiot parents. I regret having to push them out of our house and life - but they were interfering in my family, encouraging and enabling and defending unacceptable behaviour in my daughter - and they needed to go. 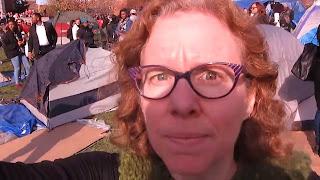 This is the face of what's wrong with our kids and universities today. Why are they not in class? Does anyone know?
But this is the hell of these new, bratty self proclaimed child victims: they never grow up, and if they can't have their way they will burn their families down to the ground rather than relent. Is it no wonder that so few people have the courage to stand up to them?
If you are the unfortunate parents of this new breed of fascist pink shirt - you are reminded that everything is a choice. Either you can raise them to be adults (and you may fail as I did) - or Darwin and Murphy can take care of them. If you wait to long, that choice will be made for you. Take the advice of somebody who has been there - start now. It's entirely possible that the chick in the pic above may one day be running a classroom with your kid in it. Do you want to trust her to influence your child?
Everything in life is a choice - and may your choices be good ones.
Posted by Glen Filthie at 07:16