I have always loved the motorcycle. The wind, the freedom - you've heard all that from the ads done by all the manufacturers and they don't exaggerate - motorcycles offer all that and more. My first motorcycle was the perfect starter bike for the times - 1976 Honda 360T. 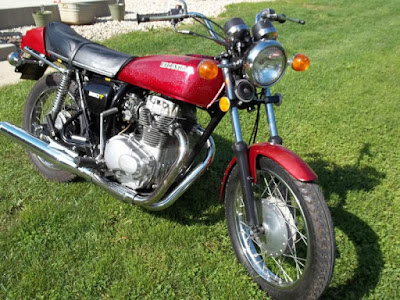 $600.00 back in 1981. That's how much freedom costs for a kid.
With my girl on the back, in top gear, revved right out - this metal god propelled us to speeds approaching 60 knots and maybe a bit faster with a tail wind. Today that thing is a classic and the old school fools are rebuilding them with all the care and love they deserve. Isn't it the damndest thing? When you're a youngster you dream of the big Indians and Harleys and when ya turn into an old fart that can actually afford one - you miss the little ankle-biters. I will always remember the days with no money in my pocket, my girl on the back of the bike, and no place to go - but enjoying the ride all the way. My last years living at home with Mom and Pop were made much better for all of us because of that bike! :)
Once we moved out and were married we had to step up! While normal people were buying family cars and minivans all I could scrape together was enough for a 1982 Honda CX500. 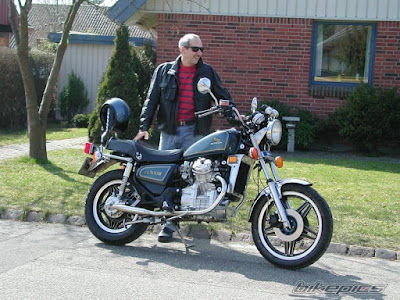 If you want the best fly weight cruiser...you're looking at it. I think they still make these.
One day while coming home from work, I witnessed an accident where a man just like the one in the photo - had a disagreement with a car driven by a fuggin vibrant who decided to pull out in front of him. I and a handful of others stopped to render what assistance we could until the ambulance arrived, which was basically throwing a jacket over him to keep him warm and directing traffic around the accident scene. Boy, that man was messed up. I tried to talk to him but he was right out of it and spit up a bucket of blood in my face. When I got home that night I got cleaned up before my daughter saw me...and stopped to think. I loved the bike but I had a family now, and my life was no longer my own, if ya catch my drift. I sold the little bike, went back to school, got a soul crushing mortgage and assumed the duties and responsibilities of the dutiful family man. But even though I knew it was right - it just felt somehow wrong not to have a motorcycle.
When my daughter left our home, and the house got paid off I began to think about motorcycles again. When the new breed of adventure bikes came out - I was lost. I went out and bought a 1000cc Suzuki V-Strom. 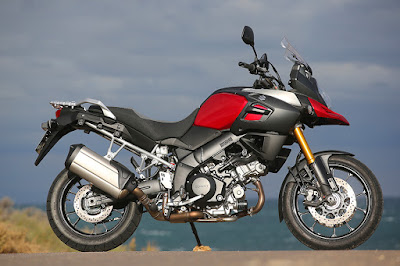 Don't let the rugged good looks fool you - this V Strom Stratobagger is a PIECE OF SHIT.
﻿
You can get beaten to a bloody green pulp for saying that to the wrong people in the wrong place...but I'm sorry. This is the only motorcycle I ever regretted buying. I pimped it out with the knobby tires, the hard aluminum saddle bags and all the farkles...but this bike was a pig through and through! It was horrible in the dirt, it ran like piece of crap, and the high centre of gravity made it dangerous in the strong winds we get on the prairies. However, the usual weasel words apply: this is only my opinion and the dedicated 'Strom Troopers' love these things and have been seen climbing trees with them. They can have them. I needed a serious road bike. 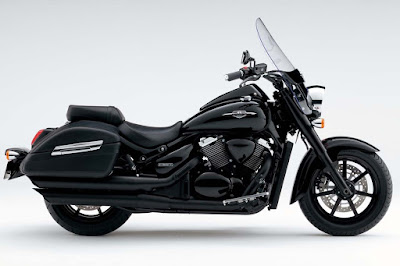 Behold the Dreadnought!!!
﻿
Ahhhhhhhhh. That is the Suzuki 1500 C90 Boulevard. I bought some cheap-o duffles to go on the backrest and the wife and I were set. We started cruising Alberta and having a ball. I remember once the cool kids on their Harleys passed us with disgust and scorn on 43 past Whitecourt... and then lit them up to put some distance between us. So... I poured on the coal and formed up on them! It drove them into a frenzy so they REALLY opened them up - and I did too and stayed with them just to show them that their Harleys weren't as great as they thought they were, and my metric bike could do anything theirs could. After a few miles I grew up and acted my age and let the kids go...but not before I tweaked their upturned noses first! HAR HAR HAR! 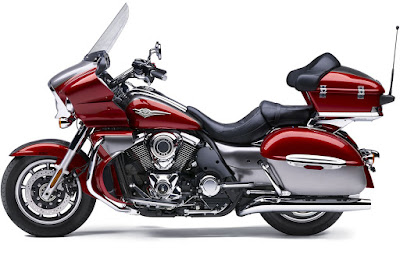 If 'big' is good, bigger is better, right? Right....?
This is my current ride now. Yeah, I could have bought a Harley or an Indian...but that is really big $$$$. I can tell you though...I thought long and hard about it. What turned me off is that those machines sell on snob appeal...and I just don't have that in me anymore. Not all the Harley and Indian guys are snobs and I will enjoy their company whenever it's offered...but there's a ton of nice people out there on metric bikes like mine, Goldwings...even scooters! I am in this game for the fun and the sights and that's it!

What's my next machine? I'm really torn. I'm getting older and it drives me nuts, but these bikes, with the wife on and a full load of luggage...well, they're a big handful. You gotta be on the ball with them and you can't muscle them - you have to know where you're going before you get there and stick to the plan. Big mass means big momentum and neither will be trifled with. Phew - what to do? What will be my next ride?

BW drives a scoot and I really like them. He goes everywhere on his and the modern machines can and do handle serious highway work with aplomb. 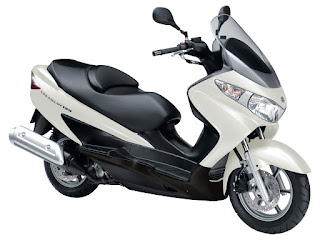 Hmppffff. 800cc's is enough for one...but my wife and I have picked up some weight since my days on the Honda 360T. I don't know if there is enough ponies there for what we need to do... 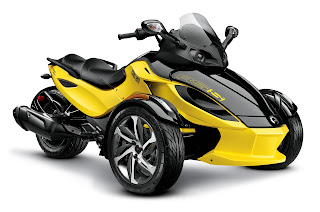 Hmmmmmm....I dunno what to think of these. This one looks like it belongs to James Bond. If it comes with inboard rocket launchers and a hottie to man the tail gun - I'm in!

That Spyder or a couple of them (his and hers) might be an option. They have touring versions...all it takes is $$$.

Who knows where the road goes next...