A Filthie Manosphere Lecture About Ageing And Hygeine

Yannow one of the big mistakes we make as men is the way we deal with excess facial hair. Younger men treat it like it's a nuisance and deal with it by using (hork, spit) electric razors or those cheap multi-blade abominations. Don't try to tell me otherwise! I've seen the commercials where some baby-faced flimp runs a razor across his fair skin at 100 MPH without a nick or a cut - and then his mommy comes to adore his smoooooooth skin! 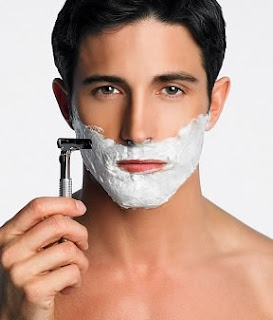 I have more hair growing out my ears and ass than that kid has on his entire face!
Wanna see...? Pics will be posted upon request.

You boys over from the Manosphere think ya know it all, huh? Been taking notes from children like Vox Day, Roosh, and other poseurs? Hmmmmm? Boys - I'm gonna give you a lecture about manhood that will make you moan in fear!! Ya see, children, manhood is all fun and games until ya hit 50 - then shit gets SERIOUS.

As Hellboy demonstrates, proper shaving equipment becomes an absolute necessity  as a man gets into his senior years.
﻿
Oh yes, boys, manhood does not end when you are in your 40's! Just as you were shocked and horrified by the appearance of hair in odd places in your puberty - it gets REALLY bad in your later years! GAH! The less said about that the better maybe. If you're a lucky, handsome bastid like Hellboy you will have hair on your head in your later years. I don't miss my hair one bit but I can't speak for the wife. A lot of women are turned off by bald men or so I've heard. Whatever - when my hair line started receding in my 40's I grabbed the razor and took what was left off too. Comb-overs are for lesser men in my opinion...but...maybe a toupee? Gawd, I could have hair like Donald Trump! Or Uncle Bob!!! Gonna have to give that some thought...it would be nice to be a chick magnet!!!!

One of the many deficiencies of our young men today is their inability to shave properly. The BEST shave comes from a proper wet shave with a straight razor. A proper shave re-invigorates the skin and makes ya feel like a million bucks. The effect is even more pronounced after a long camping trip in the bush, when ya finally get home and get to hit the shower! 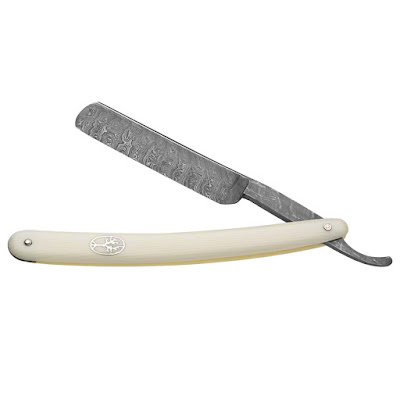 A good straight razor will set you back around $200.00 and is a lifetime investment provided you take care of it. This one is a Boker in Damascus steel and will run ya $1400.00.  This is a toft's razor, guys like us don't need to spend that much money.

The proper wet shave is not an art or something to get snobbish about...but it IS an indulgence to be savoured and enjoyed as much as possible. Open up the pores with a cloth soaked in hot water - as hot as you can stand it! Once they're opened up you will need an oil to lubricate the skin for a cleaner shave - the soap alone can do this - but I use this stuff because I have very dry skin: 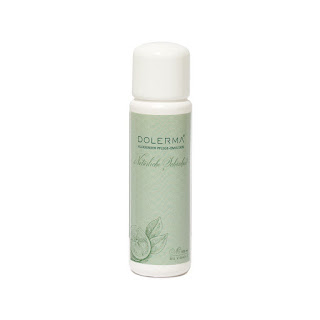 By the time you're 50 your face will have skin like a battered old shoe! This stuff will cleanse it and moisturize it prior to shaving. 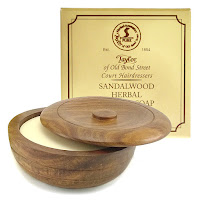 I use Taylor's. Any dedicated shaving soap will do though 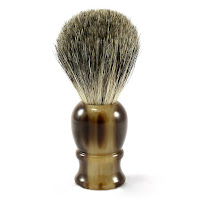 Shaving brushes can be hideously expensive too. This one's about $27.00
Aftershaves are all over the board. You will want one that leaves your skin moisturized and tight and ready for the day. My skin's dry so I go with Taylors for that too. 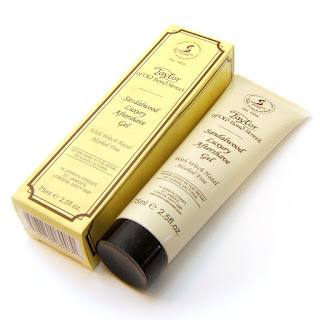 If you manage to cut yourself after a proper wet shave, this gel will put a stop to it. It isn't overly aromatic.
I bought some cologne awhile back but don't really use it anymore. Dunno why that is but from what I've heard, different men have body chemistries that favour certain scents. You are on your own with that - just respect the stuff or you will end up smelling like a urinal mint or a whore house.﻿I'm in Canada and because I hate malls, shopping and crowds I order my stuff from Fendrihan.

Unfortunately we don't always have time for a long, luxurious wet shave and if ya gotta speed things up, the good ol' safety razor will do the job! These razors are not for the smooth boy in the pic above or youngsters in a hurry - they will rip out zits and pimples by the roots along with any other bumps and irregularities in your skin. 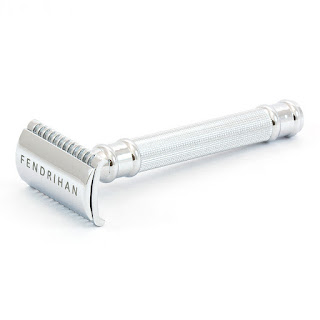 Mine was made by a company called Goodfellas and is no longer available from Fendrihan. A good safety razor will set you back about $75.00. It's not much considering it is a lifetime investment too.
Fendrihan has blades from exotic materials and manufacturers and I've tried a few - but my preference for blades is good ol' Wilkonson Sword. They can be found occasionally at London Drugs and when they do I clean them out.
Good shaving tools aren't cheap, but they aren't overly expensive either. The reason some of that stuff is so expensive is that some men enjoy the shaving ritual so much, they won't think twice about dropping huge dollars on top tier equipment. Do they have a better shave than I do? I can't say for certain, but they certainly have more money than I do!
The best shaves come at the crack of dawn. The dogs are walked, you've gotten out of the shower, the old lady is downstairs rattling pots and pans and getting breakfast started...little stuff like this is the height of manly pleasures. The only better shave I've had than that is during a long hunting trip, in the rear view mirror of the truck. The water was heated off the campfire, all my shaving stuff was laid out on the fender...and I had the world to myself and the songbirds that were just waking up. Make no mistake, kings aren't born - they're made.
There's pleasures to be found in everything in life - even getting old.
UPDATE:
The fags our moral and intellectual superiors the scolds....the health experts at MSN will learn ya everything ya need to know about your naughty parts and their role in cooties! 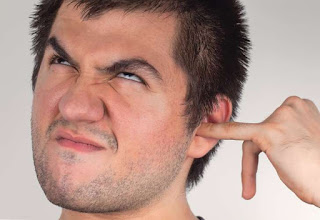 Unless there's grey matter on your finger after ya pull it out I wouldn't worry about it.
﻿