And Filthie, In His Anguish Cried Out That The Shooting Gods Were Rotten Bastards...

...and so it was that an unholy stench settled upon the rifle range...and not a fuck was given on that day. 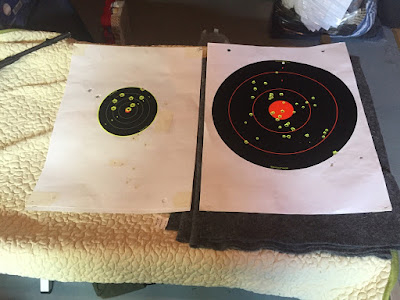 Goddammitalltohell. The Rifle Gods are angry - and piss upon me for my impudence!
The one on the left is a bench rested 50m target for my blackpowder .45-75 lever gun. I'm not upset by this - there is all kinds of ass-hattery that goes into reloading black powder cartridges and shooting them and I've learned a pile of things that need to be done to shoot them well...none of which were done here. The serious BPCR geek uses blow tubes, drop tubes, bore mops and all kinds of other utensils to shoot well on the range. A lot of that stuff becomes impractical when shooting at sub-zero temps - but we'll give it a shot next time and see what happens.
The target on the right, however - is almost unforgiveable. That's 20 rounds of .223 and 20 rounds of .308 fired from the prone position at...ahem... 150m. Again - I'm not unhappy with the .223 - that is fired from a 7.5" snubbie AR without a proper marksman's sling with some old reloads I needed to fire off so I could get the brass. It wears a crappy 3X combat optic and for the first prone shots of the year with a new gun, new ammo...? I kinda sorta can forgive myself. 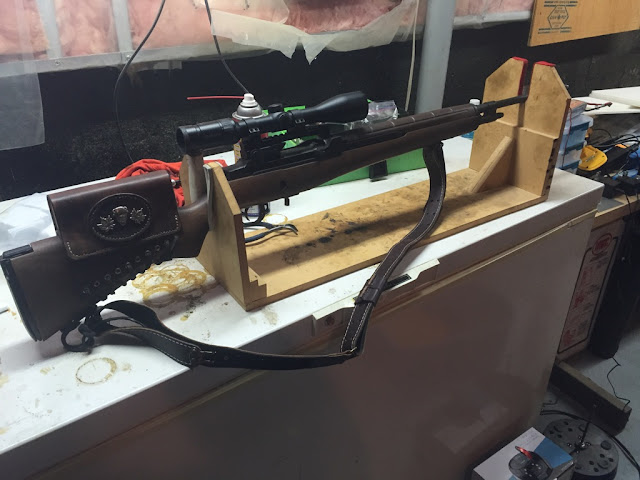 This is General Handgrenade - A Springfield Armoury M1A. National Match trigger. National Match barrel. Unitized and tuned action. National Match sights replaced by a Swarovski 3x9 variable. Blue printed and headspaced to National Match specs. Semi-auto military target guns don't get much better than this.
This gun easily goes under 1.5 MOA off the bench with my reloads. In the hands of a competent shooter those groups above are fired at 1000 yards by the snipers at Camp Perry. They would have blown the orange bullseye right out of the target with iron sights. In my prime all my shots would easily have fitted in that 9 ring. What in hell happened??? Ask for excuses and you shall get them - from somebody else. Long story short - I shat the bed. I fell out of practice and will have to re-acquire the skills I have lost. In addition I have been spending way too much time at the shooting bench with load development and not keeping up with my offhand and position shooting. It's scarey how bad my skills have declined. 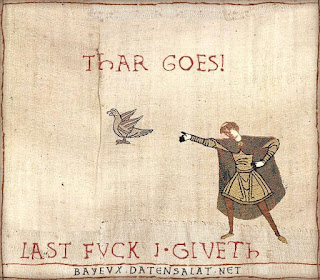 Some days, with life as with the shooting sports... this is the only attitude that works. This medieval trap shooter knows the drill.
Tonight I'll be at the loading bench, cleaning General Handgrenade and making sure scope mounts and such haven't let off or loosened...but I know what I will find. The fault is mine, and for that, there is only one cure: more trigger time on the range! You fags at Springfield Armoury can stop laughing now, and may God rot your balls! No, it might be awhile before I make the winner's circle at Camp Perry...but I am definitely in the running to place in the Special Olympics High Power Rifle event!
Next week I will lube my innards with a quart of cheap bourbon and hopefully my scores will improve. As always, fellas - drink and shoot responsibly!
﻿
Posted by Glen Filthie at 12:19