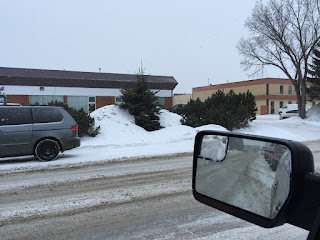 My old office. I worked here for peanuts with mentally retarded coworkers - and had the time of my life.


Back at the turn of the last century this was where I worked. The company is long gone, and I think they re-did the interior so that my old office is now retail shop space. 17 years ago now. Wow, how time flies.

Toward the end of August the hornets here start getting tetchy. They are one of God's most beshitted creatures at the best of times, but in August they get downright mean. And of course, when Lesiure Suit Fuggin Larry went out behind our shop to smoke, he left the door open and all the hornets got in and I spent the last days of summer running around the office screaming and flapping.

I was pulling this damned RFQ (request for quotation) from the Canadian Armed Forces off the fax machine - with '3RD REQUEST' snidely written in block letters across the top. 15 pages of specs, and terms and conditions of purchase. Some fwench pipe polisher out at CFB Edmonton was after us to quote on armoured plate and since we were an instrumentation/process protection company and didn't supply steel or plate I had sent it back with a decline-to-bid ...  twice. Sheesh, ya'd think that if a fwenchman wanted armoured plate, he would go to a metal supplier, right? I rudely scrawled across the top of it 'CANNOT SUPPLY - OUTSIDE OUR SCOPE'. Then I spied a hornet on the face of the fax machine. Carefully, I rolled up the RFQ...lined up ever so cautiously ... and then swatted that demented bastid with speed and fury of a man that loathes hornets with every fibre of his being! Another perfect strike! With that, I unrolled the RFQ package, fed it into the fax machine, guts and all - and sent all 15 pages of it back to the cheese-eating-surrender-monkey it came from.

A little while later the phone went off and Larry got it. Right away I knew it was bad. Usually he was flippant and upbeat as his gums flapped at 100 MPH, bantering with the men and shamelessly flirting with the purchasers and women. But this time he was actually being courteous and professional...oh boy. I perked up an ear to listen in.

"Yes, Major, I understand, but....well, you see, we are actually an industrial instrumentation and process protection company that.... no sir, we certainly do NOT want to be black listed on any future gov't contracts, but...yes sir, our inside guy is new and hasn't ever come across something like this before, and to be honest, neither have I, but....yes sir...yes sir. I shall take care of this today and one of us will be back to you shortly....thank you sir...Buh-bye...."

I went into Larry's office wondering what I was going to get spanked for, but Larry wasn't really mad at me - he was pissed at the pickle we had found ourselves in. It turns out that under Canadian law, in certain cases the Armed Forces can requisition any material and equipment from any Canadian business, and that company must supply that material at no more than 10% over cost. Failure to comply can result in the company being barred from bidding on future gov't contracts and even prosecution in court!

"But Larry, even if we wanted to, we can't bid this! We don't know the first thing about armour plate, material specs, mill certs or metallurgy!" I was starting to get pissed now too...and shooed at a hornet that had come into the office to menace me. Of course the damned things went after me and not the putz that let them in. Larry frowned and the rotten wood smoldered as he thought. Finally he picked up the phone.

"Good day Beautiful! Larry at Dildonics here...could I speak to Hal E. Tosis?" Covering the mouthpiece, Larry smirked "Watch and learn, Junior! I've got Metal Ltd over on 75th on the phone..."

"Hey Hal, it's Larry! I'm surprised you're still alive! Last I heard you had been shot by an angry husband as you tried to escape out the bedroom window...what? Same to you! Say - have you seen this RFQ on the street for armoured plate for CFB Edmonton? No? Well, they're busting our balls to supply this and for some reason they are hellbent on buying from us rather than somebody that - you know...actually deals in metals...I know, right?"

There is nothing more irritating than two sleazy salesmen talking shop...except maybe two angry hornets buzzing around your head.

"How about this, Hal: my simian sidekick here will fax you the RFQ. Quote to us at your trade price + 75%. Junior here, will mark it up another 10 points, he'll quote it out and  add a technical note to it to say "see Hal at Metal Ltd. for better pricing." You will have the contact info for Major LeBouef over at CFB Edmonton and will put your own bid in at whatever you normally price at. The Major will see our bid with it's grossly inflated prices, he'll see your competitive ones - and place the order with you! And it's a win, win, win for all of us. Does that work for you? Fine - let's do lunch one day..."

Ya gotta admit...it seemed like an elegant way to deal with a difficult customer and a ludicrous situation.

"So, Junior, ya see what we did there? No embarrassing dog fights with the Armed Forces, we do a small favour for Hal at Metals Inc and get a free trip to the Olive Garden or Red Lobster, and that damned frog at CFB Edmonton gets his armoured plate from the guys he shoulda bought it from in the first place! How's that for fast thinking, huh?  Now bow down before me, you filthy cur, for I am a business God! Dammitalltohell, where did all these hornets come from? Did you leave a door open somewhere...?"

Later that afternoon we got our prices from Metals Inc. I added ten points, put in a bolded technical note that we were only the middlemen marking up the prices by 10% - and that they "should direct their inquiry to Hal over at Metals Inc at 780-555-5555 for more competitive pricing..." Thankfully it was slow that summer and I had time for this BS. At least I wouldn't have to deal with that snotty fwenchman. Afterward Larry left to make sales calls (or more likely go to some sleazy peeler bar), and I settled down to enjoy the restful quiet of the office that I now had to myself. I had a few chores, but nothing major and life was good. We had just gotten this newfangled internet hooked up and I could surf with the best of them.

Awhile later the fax machine warbled like a sick humming bird so I got up to go check it out. Oh no!!!The machine was spitting out a PO from the Canadian Armed forces for armoured plate! The first page was smeared with bug guts. Oh, why? Why wouldn't this damned fax machine just die??? And what in hell was wrong with those dummies at CFB Edmonton?

When Larry got back that afternoon I was furious. "Way to go you stupid shit! Do you know what the comptroller is gonna do when he tries to process this order? Rotten Ron The Engineer is gonna freak too!"

Gotta give ol' Larry credit. That rat bastid knows when a strategic retreat is in order. "Well, Junior," he quipped brightly, "Congratulations! You're our leading salesman in the company's new Armoured Plate division!"

"Why, you fuggin..." I grabbed a coffee cup and threw it at him and missed by less than an inch! "NYUK NYUK NYUK! Woo woo woo woo!" he chortled as he escaped out the door to his truck. I swear to God that he actually laughed like that. "Gotta make more sales calls!" he called over his shoulder. Riiiiiiight. Run, you craven swine!

I called Hal at Metals Inc and he was flabbergasted. I called Major LaBouef at CFB Edmonton and he told me to shut my pie hole and process the order-NOW. He hung up when I tried to explain that he could get the stuff at half the price from Metals Inc. Friggin Larry wasn't answering his cell phone. Bowing to the inevitable...I faxed the PO in to head office for processing and then sat to await the blowback. When the chit winds are blowing I often tend to procrastinate but not this time - I just did it and figured I would take my lumps and get it over with. Marty The Comptroller shat his pants in rage but he had to bow to the inevitable too. He told me he would get me back for what we'd done, and that knives would be involved. Rotten Ron was even worse. The paperwork and process those guys had to do on their end would be a nightmare. Thank gawd the day was almost over...

And that is when the fax machine warbled again...and barfed up a change order from my new best friends at CFB Edmonton. They had mishandled the order and actually needed four times the amount of armoured plate they originally called for. "Please note the change in order quantities, proceed with he order and confirm your acknowledgement of this PO...". At least there weren't as many bug guts on this one...so I stuffed that one back in the machine and sent it to my corporate moral and intellectual superiors at head office too. They had all gone home because of time zones...but tomorrow was going to be a crappy day...

Some days things are just like that, I told myself. Ya put your head down, you put your shoulder in and just lean into it with everything you have...and just get it done. Things will get better eventually.

The next morning, I walked in and I remember there were even MORE hornets buzzing around than the day before. As was my ritual, I checked the fax machine first and noticed an RFQ from CFB Edmonton. They were doing an improvement project on the runway and needed quotes on gravel, construction materials and aggregates...

I stapled the entire package together, threw it on Larry's desk and call forwarded the phones and took the day off as a sick day. Sometimes a strategic retreat is the best call to make.
Posted by Glen Filthie at 01:00