Gun Fight At The Innernet Saloon

What's that? Why am I dressed in my underwear and waving a Colt 1860 percussion cap and ball pistol around? Have I gone Californian and lost my chit? No, no...although you would be correct to suspect it, my mental faculties are running at peak efficiency! Allow me to explain! The other day I was over at Wirecutter's and took a great big crap in the comments, lines were drawn, insults exchanged...and on the weekend we're stepping out into the street! So I'm practicing up on my gun slinging by lipping off at myself in the mirror and slapping leather to execute my lightning fast draw! Watch this...*ahem*...."Are you talking to me, punk? Are ya feelin' lucky...???"


Why, we'll be lucky if WC and half the black powder geeks over at contemporary makers aren't toes up after this is over!
If the meanest no-good sonsabitches ever decide to shoot it out in Edmonton - they would do it at the Cromdale Bar and grill! Sorry, no tumbleweeds blow down 118th Ave here...but there's tons of  local whores, knuckleheads and hicks to set the stage for a good show down!﻿
﻿ 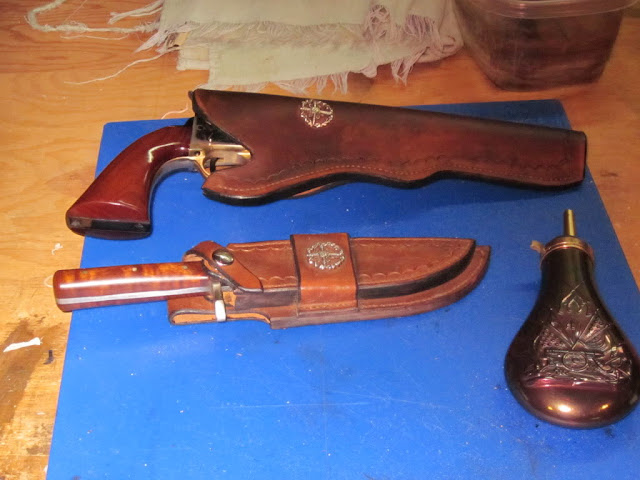 I made the knife, the sheath and the holster. If we ever get licensed concealed carry up here in Canada this will be my gun! With weapons like that I will OWN the Cromdale...and probably The Fort Hotel too...

I must have sold half a dozen of these Uberti black powder pistols. These damn things can SHOOT. I got into it with a smart ass kid out at the rod and gun club with a 9mm Glock and we started fighting over the duelling tree on the range. He would fire three or four shots, hit with one and knock a steel plate over to my side - and I would smoke it and send it right back with one from Ol' Smokey. The poor kid - he had all his buddies around and was learning 'em everything they needed to know about pistols - and I spanked him with an archaic cap n ball gun! So the buddies come over to get a closer look at it...and it is blazing hot...and stinkin' to high heaven like sin itself! And of course - they're lost. Nostalgia AND accuracy AND speed? Who can resist? Plus, if ya cast your own ball like I do- ya can shoot all afternoon for $10.00!!!

"Go ahead! Make my day!!!" Those knuckledraggers will never know what hit 'em!!!!


Probably the most beautiful sodbuster song by the last two guys on earth you would expect to do it!
﻿
I'm supposed to be 51 years old but some days, sometimes...when I pick up that percussion gun - I feel like I'm 9 years old and gone to heaven. How about one more from the saloon musicians? Chow down, chaw up, and sit back for one more:


Oh sweet Jesus!!! Where did THAT come from???  Reverend...I got six tickets to hell for you right here! Ya wanna maybe try that again...? I don't like killin' men of the cloth but one more like that and you are gonna meet your maker.
There! That's better! Don't let it happen again!!!
Posted by Glen Filthie at 19:45