Problem Real Men Have That The Manosphere Does Not Address

The problem with the Manosphere is that it has degenerated into a bunch of losers giving other losers advice on how to handle failed relationships. But what about when things are going good? You'll never hear the self-proclaimed alpha males talk about that! Funny how none of those alpha males are happily married too, isn't it? Sure, things have to go good in the sack but they have to go well in all the other areas of a relationship too. Even if you find your soul mate, there is a boat load of other problems and hassles that the successful man may have to address: money, for example. Intrusive/abusive in-laws. Time management. Conflicting priorities. The Manosphere is effectively managed by boys, obsessed with girls, who are experts in flawed or failed relationships and wouldn't know what to do with a good one. It's heartbreaking.


The Midlife Crisis
Don't laugh. It's real. If you've won the lottery and married a sane woman, if you've both put in your time and money to save, build and lay the foundations for the good life - eventually, contrary to the boys of the Manosphere...you will be in a position to collect. It doesn't happen overnight. It's a very, very slow process. One day you will be shocked to find you have a pair of pants for every day of the week in the closet. You'll be bowled over by the fact that you still have a bank balance after all the bills are paid. The day comes when the kids move out and silence reigns in the house. The repairs are all handled and all that's left is the petty nickel and dime stuff. You have money in case a car blows up or the roof needs to get done. You have time to think...and as is your habit, you are going over that mental spreadsheet looking for fires, crises, problems that HAVE to be dealt with RIGHT NOW...and there's nothing. Except crickets.
Cool, right? There's no life or death five alarm fires to drain the bank account, no summers to be spent trapped in the yard doing landscape work ... and maybe you have some seniority at work and maybe some perks to go with it...and the crisis question is 'What do I do now?' You don't have to look after anyone because they can look after themselves. Women can cope with it because they make work for themselves if nothing is available...and you have to too. It's either that - or the couch in front of the TV. If you've gotten this far in life...that is NOT an option. There are more idiots on TV than there is on the internet - trust me.
Some men get stupid. My friends Rotten Rob and Baloney Bob got into booze and hot rod kit cars.

Wanna do 60 MPH around a traffic circle in a car that doesn't even lean? This is your ride.
They had a lot more money than I did. And poor Rob...he got in a lot more trouble. The boys would take a bottle or a sack of road rockets out on Alberta's lonelier secondary highways and race these rocket ships and try to kill themselves. Rob couldn't handle it. He got an impaired driving charge and that right there is enough to end most men. You lose your wheels for six months. I've heard that men lose their jobs and their families when they can't get around. They literally take your driver's license and drop it in the shredder. Awhile later he got caught driving without a license. I went over to his acreage one day and pleaded with him and asked him what was wrong with his fuggin head? He and I were 41 at the time with a good jobs, homes and half our lives ahead of us. Awhile after that he got a SECOND impaired. "He's going to jail this time," we all said...but the lawyers got him off. Then he got a THIRD one and still didn't do time....and still, when we were together, Bob would fill him up with booze and it was like pouring gas on a fire. I stopped hanging around with them at that point...I didn't want to be around for the  train wreck. Ran into Bob again a decade later - he still has his car and his business but he has had a few close shaves too. He got pissed up one day and lost a finger on a table saw. He's blind in one eye because of another stupid work accident. He still drinks and drives and revels in the stares of the young tire biters and hotties when their heads turn to see him go by in his heavy metal war machine. We are different men now that we are old farts and have nothing in common anymore. Both of those guys sound like utter morons (and they are) - but if you met them to chat and didn't know it you would probably think they were great guys. It was the damndest thing I ever saw. They never got past the mid-life crisis. Dunno what ever happened to Rob, I hope he's alright.
As for me...I always wanted to fly. Ever since I was a kid I wanted to fly. So I took lessons but the Cessnas and the Pipers and the small planes of Alberta's former flying farmers are hideously expensive to operate and to store today. Hangar fees are outlandish. You can't do your own maintenance anymore so that has to be done only by a certified AME.  Only the ultralight aircraft are exempt from the layers of bureaucratic legislation and gubbermint mandated flubdubbery... so it was that I made my mistake. 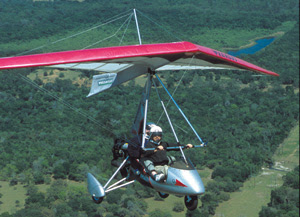 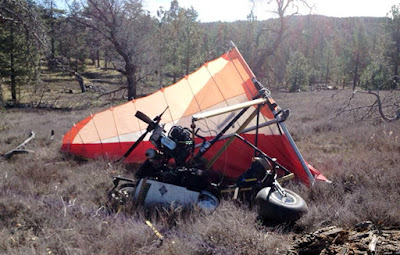