I have been blessed. For I see what passes for 'hunting' these days and I feel sorry for the next generation. Hunting leases? Hunting clubs? Guided "Safaris". Hork - spit!

Then there's the poseurs. JFC - you know who they are; they are the outdoor writers, the executive oil men with 'trophy rooms' where every second head on the wall is a gagger - and regular hunters like us never even see animals like that. The 'trophies' are all right off the game farm, stupid! Ya may as well go out and shoot a fenced in cow! And of course, after they pot their trophy these 'hunters' finish the day with a cigar and a scotch back at the 'lodge' with 5 star accomodations. Then when they get back from 'the wild' into civilization they brag about what they've done. It's all BS and phoney as hell, and as much as I hate environmentalists, bunny-huggers and bambi-lovers...they are right to call BS on it!

Here in Alberta we still have some wild spaces left and in my misspent youth I was fortunate enough to take a few animals with a really good crew of guys. Pete The Meat was our lead trouble maker for the simple fact that usually he was able to solve the problems he created for the rest of us. If you want to talk about The Real Hunter - this guy is it. He thought nothing of canoeing into Alberta's back country where the only other access is by helicopter, float plane or jet boat - shooting one or more animals that weigh over a ton on the hoof - and bringing his camp, his animals and gear back out by canoe too. A hunting trip like that means minimal gear and real hardship. I know several such men and for them the hunting trip is a means for them to test themselves. That is the opposite end of the spectrum and I personally want no part in some Hemingway version of 'The Old Man And The Sea' on a hunting trip.

I hunted for meat and for fun and that's it. All my animals were trophies even though most were small deer and chickens and pheasants. In my scholarly opinion that made me an expert and an authority on hunting and I was not shy about orating, pontificating and bloviating on the subject at the drop of a hat. Pete and his crew overheard one of my scholarly lectures one day and figured I was worthy of an invite on their 'Fall Classic' hunting trip which was exactly opposite to their hellish canoe trips they took for themselves. 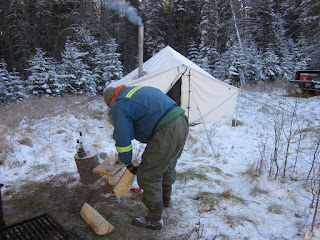 Get to work Pete, ya fuggin slacker!!! Get that fire going before I freeze to death!!!
Peter is one of those guys that is truly a gift from God to those that know him. (And - if any of you slobs tell him I said that, I WILL find you and kill you). He has all the gear: outfitter tent, ATV's, trucks, grills, etc. He takes the Fall Classic as a personal challenge to his intellect and character - he wants everyone to have the best time possible. The guest celebrities for the Fall Classic are only the most elite of the outdoorsmen: only those that can offer the unique blend of obedience and stupidity are invited to go along so it was only natural that I was invited to attend! 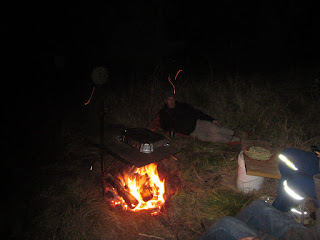 Behold
The Court Of King Peter. We are being schooled on outdoor cookery and pretty much everything else. Chris gives Pete all the attention he deserves.
I shat the bed on this trip and forgot my camp chair. I'm an old fart with major back problems and probably a little arthritis - so Chris insisted that I take his chair - and sprawled on the ground and thought nothing of the kindness. It's something to think about the next time us old bastids are "bitching about these goddamn kids these days...". To this day Chris has no idea how much I appreciated that - I was just too overwhelmed by the relief of the pain in my back to even speak. That was probably the moment when I realized that this was going to be my last hunting trip. It's not fair to ask strong young men to slow down for a crippled up old fart.﻿ 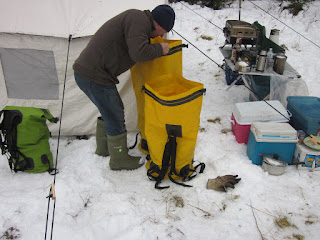 Rick is probably the most incompetent bar tender I have EVER met. He forgot the scotch! Can ya friggin believe it!!! He expected ME to drink rum and coke!!! I'm STILL fuming about it!!! Fortunately I had a bottle of Edradour and The Dalemore in my supplies.
Rick is almost as hard-core as Peter is. He's an athlete and apparently can keep up with Pete on the trail no problem. Ya gotta respect that! In this pic he's rummaging around in a water proof duffel (probably looking for the scotch he forgot) - apparently they stow all their gear in these things when they are roughing it in the canoe. What an excellent piece of gear!
Rick's Bar & Grill is located behind the tent, conveniently close to a lavishly well appointed outdoor latrine. Nobody thought much of the location of The Log Of Ease until I used it a couple days later. 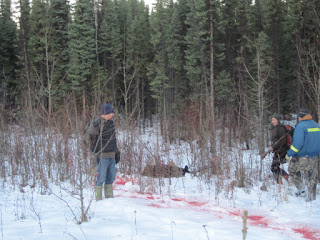 Pete and the boys got the moose. Pete made a flawless shot but I claimed the credit for the kill as is my right as the oldest and most handsome member of the expedition.
Don't let the blood fool you. That moose was done the second Pete squeezed the trigger. The swamp donkey ran about 40 yards and collapsed. With four guys, we had him skinned, dressed and quartered in less than 45 minutes. Peter and Rick know how to handle field care of the carcass and that is something that disappoints me about the younger modern hunters coming up: they are obsessed with guns and firepower and ballistics but couldn't care less about knives, hatchets, tarps, saws, tents and the other little stuff that can make a trip like this a wonderful experience or a bloody nightmare.
The boys split the meat three ways, and being a chit house leather worker of sorts, I got the hide which I took in to be tanned. Haven't made anything of it yet - it's still downstairs...but I do have plans for it. My last rifle is probably going to be one of these, God willing. A rifle like that calls for a proper cartridge belt for when I'm on the rifle range shooting with the seniors and duffers at the BPCR tournaments I plan to attend. 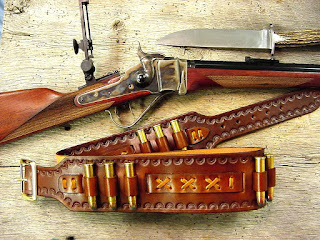 I may never hunt again, but a rifle like this would be a grand way to finish my career in the shooting sports, and a stylish trendy ammo belt made from the hide of "my" last moose would be an excellent touch stone to evoke memories of brighter eyes, younger muscles and steadier hands. I wonder if the boys might want ammo belts/pouches, knife sheaths made from that hide? I will find out!
It is a grim subject, fellas. Those of you that love the outdoors and hunting will eventually see a day when, like me - you must give it up. For me that time came far too early but who knows? If I can knock this bloody weight off, get active maybe my back will sort itself out and...and...sigh. If I ever DO go out on another Fall Classic it can only be as The Camp Cook. Staying in camp, doing the dishes, sending the younger men off while I potter about and stay behind and drink and ....screw it.
I will see you younger bums on the rifle range! I still like to shoot and if you're so inclined - feel free to spare an old fart your hunting story. Pictures too, if ya got 'em!
Have a good weekend folks!
﻿
﻿
Posted by Glen Filthie at 07:32