Get out your visa card boys! Mikey's gonna learn ya everything ya need to know to be a REAL man! An Alpha Male! It's all in his book called 'The Gorilla Mindset'. Once you're done reading it, please leave it in the outhouse. Somebody used the last roll of triple ply toilet paper and didn't replace it! I'm lookin' at YOU, Rat!

I love how he sets the hook. We've all seen that mouse of a man with the fat, domineering slag of a wife. We've all seen him do that 'whipped dog' look too. Most of us have given our mothers, our wives or even our daughters that look too. Sometimes us guys just get beat up by our women because they're having a bad day. What of it? Uncle Bob and I and the rest of his minions have had heated debates over the concept of the Alpha and Beta Male - and the lesser men described by Greek letters. About the only thing we could agree on is that if there is any validity to the Hierarchy Of Manliness - Bob bottoms out as a Zeta and I go right off the scale because I'm special. HAR HAR HAR! You could say I yam touched by an anvil...HAR HAR HAR! 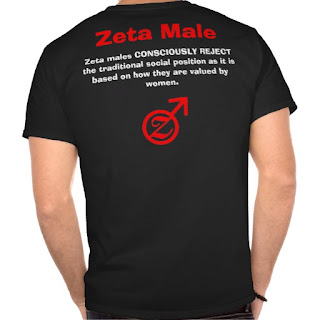 Bob got a cool shirt and all I got was a boot in the arse...

My father in law wasn't always a beta male. When men die on their feet they don't do it all at once. They die a little each day. Their soul leaves in dribs and drabs.

Doug got his first job within the credit/loans industry when he was 18. He had just successfully finished high school in a time when most men dropped out unless they were from wealthy families and headed on to university. His first child was on the way within the first year that he was married - so he went to work in an loan/investigations office as a mail boy. He was too smart to dead end in a job like that, and back in those days most companies still promoted from within. Soon he was doing sales and managerial work, and another child was on the way. More promotions followed. More responsibility. More pressure. More stress. More long hours.

Then his third child was born - a star crossed son that got both ends of a real shitty stick. He was born with heart problems and was hyperactive. Doug started to drink. His father was an alcoholic and so it looked like he would be too. More promotions came - but they required that he relocate. He and his wife left their families behind to move across the country to Alberta. The economics and timing of that move couldn't have been worse. In the Maritimes he sold a fairly nice house in a depressed market - and had to buy an old natty one in Alberta's booming oil economy of the 1970's. His wife couldn't work - she had to care for their stricken son. Life got a bit better for his wife when his oldest daughter could help Mom out with her younger brothers...but it was still a strain. His wife noticed the boozing and knew all about the stresses and pressures of his job. Without meaning too, she added to his burden with her nagging and bitching to stop drinking. He started keeping a bottle in his desk at work. But Doug was a branch manager now, and a rising star in the company. The best day of his life was when he and a bunch of the boys went on an impromptu weekend fishing trip down Alberta's Forest Trunk road. In those days it was all gravel and parts were impassable at times. The boys made camp, started a fire - and drank themselves blind. They played catch with the baseball until they got too drunk to throw. Then they cozied up to the fire and drank whisky right from the bottle. They were free! No work, no pressure - no wives and family! This was living.

This is how a man dies on his feet.

Fast forward a couple years. His daughter met a boy he did not approve of.  His older son was as close to being a juvenile delinquent as he could be without actually being one. He was a suspected firebug and shoplifter. His youngest son became more and more ill with each passing day. On impulse he broke his budget one day to buy the boy one of those new-fangled BMX bicycles all the boys were going crazy with at the time...and his son was even able to ride it once or twice before going into the hospital for the last time. When the boy passed, Doug held his wife and kids as they cried but he shed not a single tear himself. A very large chunk of his soul died with his son.

A year later his daughter was pregnant. It was like a broken record going round: the economics and timing couldn't be worse. Alberta's oil boom had gone bust, jobs disappeared and young people got hit the hardest. His new son in law was useless, he couldn't find meaningful full time work and had to settle for part time jobs. His own job was going like a bucket of the brown stuff. In hindsight, he should have walked away a dozen times...but he stayed. The recession deepened. The company he worked for was sold, and the new owners demoted him to a junior sales position in hopes that he would quit and they wouldn't have to pay him out. Still - he hung in there. By now, his wife was recovering from the loss of her son. His son in law and daughter were living in the basement while he went back to school, his wife had filled the void left by the loss of their son with their new granddaughter...and things at work continued to worsen. The company had hired some vibrant and diverse femcnut to run the Edmonton office and shortly after - this new age empowered female executive gave him his pink slip. After 31 years with the company, he packed his shit up in a box and was escorted to the door. Of his soul and pride...only crumbs remained after that.

After that much time with the company he didn't even know how to write a decent resume. In the lolling economy he couldn't find a decent job and worked a series of part time jobs the same way his no-good son in law had. Speaking of whom - he had begun to fight with on a regular basis. He didn't like the way his son in law was raising his granddaughter and often said so - and the resulting fights became bitter and heated.

But all was not doom and gloom. 31 years with his company had left him with a sizeable nest egg. He could retire or semi-retire if he wanted and he was restless. The house was full of memories of their departed son, his kids really didn't need him anymore (and his son in law made sure he knew it) - and he and his wife needed a change. They sold the house, moved out to BC and lived on their own to blow some dust off their brains and come to terms with life. Doug was not proud - he took odd jobs and part time work as a mall cop and a building custodian. Slowly - so slowly he must not have noticed it...he started to let go. His wife began to make all the decisions, some good. and quite a few not so good. But he didn't care - he could let go now - somebody else could do the thinking. He didn't have to worry about mortgages, or kids or grandkids. He made friends at work. He got interested in home brewing and even distilling - and even made some ghastly lighter fluid that he drank with gusto. He read magazines like Harrowsmith and dreamed of living off the grid. A small patch of land, perhaps a wood heated cottage, with maybe some backyard chickens scratching and pecking in the yard. And a greenhouse...

His wife would have none of it. When she was ready to retire, she wanted to move back to Edmonton and live in the city to be with her kids. And - she didn't want just any old house - she wanted a new one that was bigger and grander so that she could have friends and family over! Hardwood floors! Three car garage! Central vac and heating...!!! Etc!!! Upgrades!!!!!!

I started to see that 'look' on my father in law all the time after that. He worked part time but in his off hours, instead of going home he started coming over to our house to get away from his wife. He would find odd jobs to do and then sometimes - maybe when the old lady was ragging on him especially hard - he would take a run at my liquor cabinet. Once or twice he would take down a quart of the good stuff like Highland Park or Lagavulin ...and apologize later. Then he would replace the bottle with some dog shit like Liquid Plumber or some gasoline he siphoned out of BW's motorcycle. He would always make a show of filling my glass and once when I coughed and sputtered - he was incensed! This was a man that could drink Teachers, Bells or Famous Grouse - and enjoy it! His bargain bin rot gut was as good as my faggy single malts - so there! Once in awhile you could still see the man in my father in law...and I would raise my glass to him and drink his lighter fluid and all was well between us. Until his wife found out where he was hiding in his off hours...and then she began coming over too...and then I started to die inside and give my bitchy old mother in law that 'look' too. I think she liked it.

Men like Mike think that being a man that lives at his potential means freeing yourself of the company of morons. If only it were that simple! What if the people involved aren't really morons? What if they are just acting like morons? What if it was extenuating circumstances that led them to act like morons? To me this is what manhood means - at what point do you go from 'freeing yourself of the company of morons' to shirking responsibility to your family?  That is a line many men walk in today's age of broken homes, rampant divorce, feminism and homosexuality. My father in law ran into his biggest woes when he went along with all that and let morons, liberals and feminists define manhood for him.

As a man it is my intention not to be defined and/or limited by women, wealth or social standing - I will be defined by my purpose.

All I gotta do now is figure out what that purpose is - and I'm off to the races!
Posted by Glen Filthie at 16:26