I was born lucky although you would never know it to hear me bitch and gripe. I grew up on a small acreage and then we moved to a small hobby farm. I had backyard chickens, horses, dogs, cats and loved them all. When I drop into the chicken coop it's like stepping back in time to better days with better people. Watching the birds strolling around looking for mischief and fun takes me back to a similar rural setting hundreds of light years away. Make no mistake - chickens have all the character, intelligence and potential for friendship that parrots do. Urban people are often shocked to discover how personable domestic livestock is...and then become morose when they look at what's on their dinner plate.

When I am not making a nuisance of myself at the Chicken Coop I like to trespass on the Small Hold. I can almost hear my father as poor PP barely survives a determined assault by his formerly fine feathered friends.

My Dad's idea of a perfect weekend was two days hard work, with a beer and a flop on the couch for a snooze afterward. Dad was a builder and worked with his hands - and a ruthless perfectionist. His cars, his property, and his machines were always in top notch condition. His shop was neat as a pin. My parents didn't have time to visit and their property in the country was a huge novelty for our urban friends. Since we had no time to visit them - they had to come out to see us. Mom would clean house and chatter and any of her visitors would have to put on the coffee and get out the cookies - and Pop's friends would have to pick up a hammer or a shovel and the men would talk as they worked. It was actually a good arrangement for all - relatives and friends were always coming in and going out, and got to take part in the running of our little farm.

One day Pop and Mr. O were taking a break and sitting on a plywood sheet resting across some saw horses. Wayne O. was a big, lanky former farm kid that loved our little acreage and the hustle and bustle and was always a willing set of extra hands and brains when Pop was undertaking new projects. As they talked, one of the chickens had hopped up on the sheet to visit and see if there was any mischief in the offing. Chickens are actually intensely curious birds which is why they have a highly developed panic reflex. Birds that become pets will eventually lose that panic reflex too.

The bird ambled up and between the two men who paid no attention...and looked at the coffee in their cups...then started pecking at a pack of cigarettes. When Pop took those away, the hen turned to Wayne - who finally took notice of the bird. "Hello little one," he said amicably - and playfully poked the hen with a comical 'Boop!' Insulted, the bird pecked his hand and the big man roared with laughter - which only pissed the hen off. Again, he poked the bird with a playful Boop! - and this time she pecked harder and gave the skin of his hand a painful twist. That hurts a bit - do not ask me how I know this. But Mr. O could not leave well enough alone - again he poked the bird and the hen lost her shit. Feathers flew as she attacked and flapped and squawked - and chased Wayne half way down the driveway in a clucking rage.

"I almost got killed....! By a friggin chicken...." Wayne gasped - and everyone dissolved into laughter. All too soon the fun was over and we were back at work and on with the day. Hours dissolve in seconds on the farm and pretty soon the day was shot. You can't have people come over and work and let them go home hungry - so the BBQ was sparked up. I was in the house rummaging for a pre-supper snack...and I couldn't see Mr. O, but I could hear him... "Why - hello, little one.....Boop!" 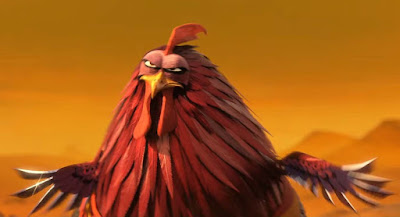 I actually saw Mr. O and his wife about 2 years back - they were visiting my parents when I dropped past on a quick errand - and some mad scientist had turned Wayne into an old man! He had had a hip replacement and had the aches and pains of a man that worked hard all his life.
He still laughed and smiled like he always did and I know that even with the hip and the bum knee and the cane...if that psychotic hen were alive today he would give her a playful poke just as he did all those years ago.
Some people never change and with a lot of them - that's something to be thankful for.﻿