Get Your Maggots Out Everybody!

It's an ice-fishing expedition!

Uncle Bob and BW are the closest we can come to responsible adults - so they will ride up front and drive the snowmobile! The Mohave Rat and I will ride behind on the cargo sled with the ass boxes, the tip-ups, the jigs and the booze! Check your load out and make sure ya got your Russian Spoons and wire worms as well! Can you lash Wirecuttter to the sled, Rat? He seems to have gotten into the anti-freeze a bit early... we can light him up again with some Tim Hortons coffee once we're ready to settle down and pound some fish! 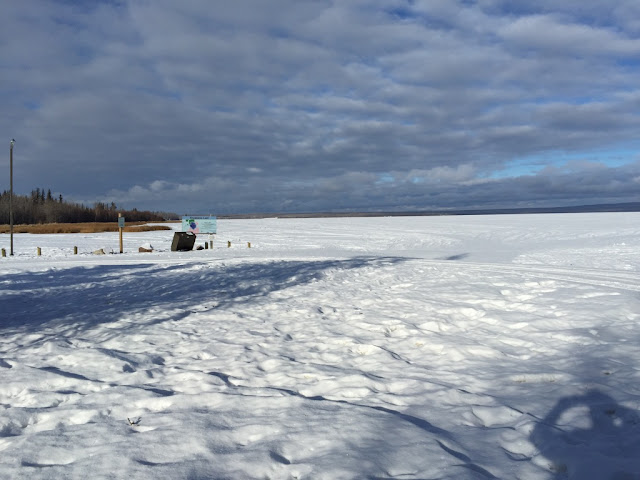 I haven't been ice fishing in 100 years. It's easy to forget the big sky, the wind and the sense of space and peace out on the ice. This is how tranquility and serenity is made.

This is Sturgeon Lake on the way up to Grande Prairie. One of the perks of my job is that I can pull over on the way out to stop and admire the view while I yak with customers on the phone, take a squirt or enter notes and data on the computer. Screw the home office - my office is in the truck and life doesn't get any better than that for an old fella! Sure, it may smell like feet, farts and Christmas tree deodourizor in my truck ...but ya sure can't beat the view! And the fresh air! 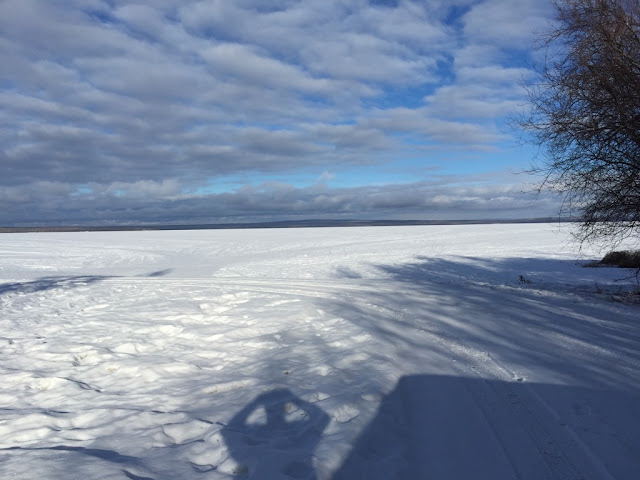 I am going to have to hit up BW for some camera tips. These crappy cell phone pics just don't cut the mustard!
Back in the good ol' days, before the filthy freeloaders began commercial netting on Alberta's lakes - you could still get out and get a good feed of fish! Ice fishing is the ultimate tranquilizer - you need an ice auger, a stick with some line on it, a bag of fresh maggots from the bait shop ...and an ass box or pail to sit on - and you are in business! Ya wanna be in about 8~12 feet of water if possible.
I once got invited to go out with my brother's gang and it started off great. My brother's friends were a collection of young turkeys named Finn, Hammermeister, and Foster. Foster was the rugged outdoorsman who smoked colts and always had a drink, a joke and a smile for his friends and visitors. Hammermeister was the 'Silent Bob' type. If anyone had a mishap like setting himself on fire, or losing his balls going over a barbed wire fence - Finn would be the guy to do it. Manure stuck to him long before the term 'shit-magnet' was invented. The one thing these guys did well at though - was fishing. They were always on fire, they had tackle boxes filled with the best lures made by mankind, and the gods smiled upon them and rewarded them profusely for their devotion to their craft. It was a high honour for a piker like me to go fishing with these guys.
When ice fishing, they were the ultimate ultralight high speed, low drag dime-store fishermen with minimal equipment. They didn't have motorized ice augers, or tents - they had fashioned tarps to sit under that looked for all the world like a great big garbage bag. It was comical - once in awhile one of these garbage bags would rise up on two legs, walk a few paces away from the hole in the ice - and start tinkling right out there in the middle of the lake! But in addition to allowing them to urinate anywhere without violating lewdness laws- these things blocked out the sunlight and allowed them to see the fish as they skulked about in the murky depths below. I was lost the second I sank my line. The wind howls across the ice but I was wrapped up in my snuggies, under a windproof tarp - and the without the wind chill, it was downright homey under there. A crock of Gibson's sat in the snow at my feet and things warmed up even more. A hook full of courageous maggots went down, I heaved a sigh of contentment...and all was well in the world.
As your eyes begin to adjust to the gloom a whole new universe pops up down there. A nice looking whitefish ambled up to my hook...and just looked at it. And looked at it. And looked at it. "For gawdsakes," I whined... "BITE!!!" But the scaled sonofabitch just sat there, taunting me and looked at my hook. He would even open up as if he were going to eat it...and then backed down at the last second. 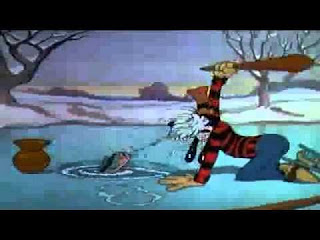 A timeless classical battle of the wit(less).
At that moment, I became convinced that fish can sense the anxiety and rage they invoke in humans  above the ice, and thought it fit and proper punishment for them to end up spitted or filleted and fried in a pan! Bastids! He continued to eye my hook - and then darted away into the darkness like a scalded cat! Dammitandblast!!! Sniffing in disgust - I grabbed the Gibson's and fortified my constitution...and relaxed again.
Which was the exact WRONG thing to do!
I later learned (the hard way) that when a fish is eyeing up your hook - and then beetles off in a panic...it usually means there's a bigger, badder fish in the neighbourhood that frightened him off. So it was that I nearly shat my pants when a flash bolted out of the darkness, hammered the hook - and almost took my fishin' stick down the hole and into the depths with him! "Holeee CHIT!" I shouted, " I got a monster on this one, boys!!!" I was standing now, and the wind caught my tarp and blew it off. "Careful, Glen! Bring him in slow! Don't let him get any slack in the line or he'll snap it!"
Oh, he was a cagey one... a couple times I thought I had lost him only to have the line go tight and jerk like mad as he tried to surprise me and catch me off guard. The guys were interested now - they knew I had a whopper from the way my hands jerked and moved when the fight got fierce. It felt like forever but soon I had my first whopper out of the hole and held him up for the boys to admire - a monster Alberta pike. It was one of the happiest moments of my life: I idolized my big bro, and his cool friends were all fawning over that monster that I had caught. For a brief moment in time, I was king of the world and worthy to walk with Immortals.
"What a handsome fish," I congratulated myself - and threw him back down the hole in a classic 'catch-and-release' that is the rule of the day for elite sportsmen everywhere. Only problem was...those guys weren't as elite as I thought they were!
"Glen! What in HELL is WRONG WITH YOU???" Hammermeister looked like a moslem who had just had his Koran pissed on. "Glen...FFS...we're fishermen. We EAT fish...!!!" Finn fell into a swoon and passed out in shocked outrage. Foster wanted to vomit with rage. And my brother...he got that disappointed look I had seen so often as we were boys growing up. Like when I struck out at the bat. Or got trampled in scrub football. Or got murdered on the hockey rink. "What?!?" I said. "I caught it and made a clean release...". What in hell was wrong with these guys? "There's nothing wrong with him," Big Bro said to his real brothers in disgust, "Other than the fact he's a hare lipped retard, he's alright..."
I think it's part of the maturation process. When I was younger I kept some fish that I probably shouldn't but after a certain point...it didn't matter anymore. It's all about fun and I think those bums still go out and have a blast - I know my brother does. I will bet dollars to donuts he throws them back now too. When you get older leaving something behind for the little ones becomes a big priority. 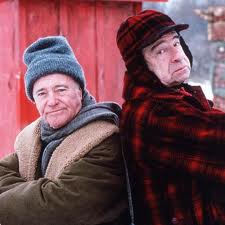 From the days when heroes walked the ice
If you're taking your son or grandson out on the ice for a day with the family - be sure to tell the young ones of the epic battle between Old Man Filthie and the Monster From The Depths. Be truthful and mention my rippling muscles pitted against a fish as long as a gator with teeth to match! Describe the frothing water, and the crack of sheets of ice when the irresistible force met the immoveable object! That terrible monster was released back in the 90's and is probably the size of a nuclear submarine now. All that's needed to put an end to him is a courageous youngster with the same nerves of steel and stout heart that allowed Filthie to prevail against him all those years ago...
There's no sea monster big enough to ever frighten me...
Also from an age when heroes sang of whales and tales
Posted by Glen Filthie at 15:35