While most tots gravitate to heroes like Superman and Spiderman and the Marvel comic book lot - I had this guy:

Blast off! The Yanks and kids probably never heard of this guy but he was the only cartoon we had in the days before cable TV.
Oh my gawd - that show sucked the first time around and age hasn't improved it any...but as time went on my tastes matured. I started reading TIME magazine and I guess then it was written by the same fags that write for it today. In grade two or three I started asking my mother uncomfortable questions about the Viet Nam war and the mealy mouthed pacifists that set the narrative for it. I was told to find something else to read and it was probably the best advice my Mom ever gave me. She was shocked and horrified when Guns & Ammo, American Rifleman and other gun rags started replacing my childhood comic books. New heroes began to set the agenda for my developing morals and ethics. 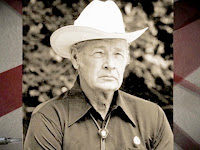 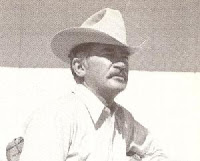 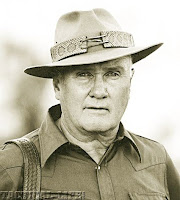 Col. Jeff Cooper: Marine, Teacher,
Underground Grammarian and hardass
I even sent a fan letter to the good Colonel as a kid and bragged about smuggling copies of his rag into class to read while my witless teacher droned. I got in shit - they published it in Letters To The Editor and I was scolded and admonished to pay attention in class. Honest to God, I tried, Colonel...but you were by far more interesting and inspiring than the hippy flinks and flits I had to put up with in class!
I should have listened to the Colonel - but instead drifted through, passed along by teachers that cared about as much for me as I did about them. When I was summarily graduated and ejected into the real world - I got my comeuppance! I wasted about a decade of my life trying to recover from a bogus education and a spoiled childhood. One day we were on coffee and bitching about how much work sucked and what an utter asshole our manager was - and I realized that this was my lot in life unless I did something. Yannow, the hippy generation whined about being a 'lost generation' and good grief - those idiots had no idea what being lost in the modern world was like! How do you get your bearings? How do you pick a career path? How could I overcome the deficiencies in my education? How..how... how...? I had my hands utterly full just making it pay check to pay check, working 50~70 hours a week for assholes that could care less if I burned out or stressed out.  Later at lunch a fella finished up with a book written by this guy: 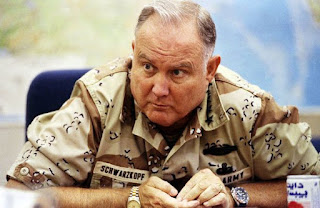 His autobiography should be mandatory reading for all young men today.
The man is a literate, intelligent writer that pulls no punches. He even lays it out for young men on how to proceed with their lives: figure out what you want to do. Don't vacillate or be put off by hard work - all that matters is that your goal is reasonable and attainable. Identify the resources you have to make it happen. Identify the barriers between you and your goals, and have a plan to overcome them. Accept and embrace the sacrifices you will have to make. Don't make excuses for failure. Accept and correct them. Embrace self discipline and self improvement. He seemed to be looking at me when he wrote that nobody is ever trapped. Everything up in life - right up to and including defeat and slavery - is a matter of choice.
I was absolutely stunned when I finished it. I was no longer lost. I had 'found myself' and knew what I had to do. I put in my two weeks' notice with the plant manager and he paid me the two weeks and bade me farewell on the spot! I enthusiastically shook his hand and thanked him for his consideration...and he looked like he had swallowed a turd! I made the rounds and bid my farewells - and when the manager saw me doing that he screamed at me to go - so I flipped him off and ran for the door! I didn't even look back as I left that sweat shop behind me. From here on out I would depend on myself, and not the whims of the psychotic narcissists that run the sweatshops.
A year of correspondence courses got my high school prerequisites out of the way and I was ready for formal secondary education. People that knew me and had called me an idiot all my life were astounded when I succeeded. After that we went on to live the Canadian Dream - a home, cats, dogs, a couple nice cars in the drive way...and all it took was hard, focused, directed work. Anyone can do it.
Problem is now I am slightly younger than the General is in the pic above...and I wonder where the time went, and what do I do now? With all the bills paid, the kid gone and the wife looking after herself and her church group...I guess it's Mission Accomplished...what now?
Welllllll....I guess it's back to square one! What do I want to be in life? Maybe in better shape...how do I do that? Oh no....what are the barriers separating me from my goal? Sob...but...but ...but a diet...?
Goddammitalltohell! Embrace the suckage...??? Aw jeez...alright.
But...screw you, General! If anyone needs me I will be sulking and pouting and NOT eating anything good and NOT drinking beer by the vat and pail. This mission is time sensitive too, darn it. I've always had problems eating right and this is a battle I would like to win before I go for my last dirt nap.
Who are your heroes, and what is your mission?
﻿
Posted by Glen Filthie at 06:34