How long before this guy is sporting ballistic armour, shoulder missiles and miniguns off his elbows?
In the post below some Africans are laying about the guerilla camp and one of 'em gives a chimp an AK47 - comedy ensues when the chimp shoots up the camp and the jokers have to run for their lives.

And now the hairless monkeys at Boston Dynamics are playing with weapons that make the potential of an AK47 in the wrong hands laughable. To answer my own question - how soon before these things are packing heat? You can bet the prototypes already are.

Being something of a robotics/motion control buff I watched a byte 15 years ago where some Pentagon brass hat was reaming out a roomful of eggheads from DARPA or The Skunkworks. He was having a kiniption because the new algorithms he wanted for the autonomous cruise missile could only evaluate targets with a 65% accuracy. That was 15 years ago - an eon in high tech evolution. The Pentagon wanted to be able to fire a cruise missile carrying cluster bombs and forget about it. They wanted the thing to fly over the countryside evaluating and attacking potential targets for itself. And of course, being ignorant and stupid, most people fear such developments because they don't understand - the chances of the machine making a mistake resulting in a friendly fire incident - are far less than if a human had his finger on the trigger. Or at least - they soon will be, if not already.

Unca Bob and I have disagreed on artificial intelligence. He says it will never happen but I say it's already here. What's the difference between a machine deciding whether or not to attack a target  - and Uncle Bob doing it? The only difference I see is that Uncle Bob is far more likely to make a mistake as his senses are much more limited and things like stress and adrenaline in a combat situation can have an adverse effect on him. What happens on the day when the robot asks why his creator has a soul and he doesn't? We had better have an answer because I think something like that is no more than 20 years away. As for today's drones? They are picking and choosing their own targets all the time now. All they need is a green light to fire from a human overseer - and off goes Abu Al Fuknuk Al to pick his 72 raisins!

In the next 5 years - sooner if Donald Trump becomes president...crazed stories will start to appear in the tabloid press about a squad of black robots murdering a town full of innocent civilians in Dirkadirkastan. And some smirking snivel servant might quip 'it wasn't us...but for the record, it was a terrorist compound and not a village...' and some other smirking squaddie will neither confirm nor deny the existence of automated bipedal robots in combat roles.

What are we but a collection of algorithms and programs? 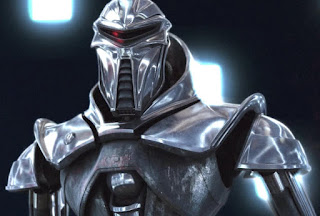 The Cylons are coming. Glen Filthie and Uncle Bob are
NOT afraid.