My First Encounter With Crazy Women

Ahhhhhhhhhhhhhh.... I see PP is facing poultrygiests  again. Mental note: if he goes dark or offline, we'll send BW out on the motorcycle to scout the situation and report back to the Thunder Box. If any wet work and/or recovery is required we'll send in The Back Yard Beardo and the black rifle boys to restore order! Rest assured I will be keeping close tabs on The Smallhold!

I grew up on a small hobby farm/acreage and I remember the delight Pop took in the animals and livestock that figured they were the property owners and the humans were their servants. He sounded a lot like PP does today.

I had few problems growing up the way I did. They revolved around my hobbies and trying to escape from Pop and his endless chores that he had for me. It wasn't so bad, I usually could escape in the early afternoon but before that - Dad kept me busy.

One afternoon I noticed the ground in the chicken pen was hard as a rock. A couple years of sun-baked chicken shit, straw and weather had given the soil a consistency of bullet proof glass. You could tell the birds didn't like it - they love to scratch and peck at the ground and this stuff would give them nose bleeds if they went at it.

I went in the garage and thieved a spade and began breaking it up and turning it over...and the birds went nuts! Underneath that bullet proof barrier a civilization of underground bugs and worms flourished...and the birds moved in to chow down! A week later I had the soil groomed to the consistency of fine loam...the birds would go out to peck and scratch in it and sink up to their knees in the fine, spongy soil. They loved it.

A few weekends later Gramma noticed the soil and then SHE went nuts! Gramma wasn't a mere gardener - she was a full blown botanist! (To this day I hate plants and gardening largely because of Gramma. I was constantly lectured about plants when she was around and it drove me nuts!) In any event, the old bird figured that this chicken shit soil could be mixed with potting soil to produce first rate flower soil or some damned thing. I just shook my head and watched her show up weekend after weekend, often with her gardening friends...and they would go ga-ga over the chicken shit too! They would go in that pen, get down on their knees and run their hands through it like it was gold coins or something! They thought nothing of the fact that their could be fresh wads of chicken shit mixed in with it! GAH!

It was gross. It was hilarious. I was 12 or 13 when I developed the scholarly hypothesis that chickens and women have similar brain construction and thought processes which would explain this odd symbiotic relationship Gramma and her biddies had with them. To this day I still hold to that theory and I challenge my fellow intellectuals and academics to prove me wrong, too! 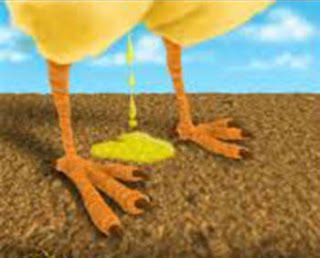 One day my Aunt Ruth came out with Gramma. She was in her 90's and could barely walk. I had only met her once as a small child but she was a family legend. She lived in a small, neat cottage on Cooking Lake and was capable of independence and self reliance that would shame even PP! Once, in her 80's...she fell in her back yard and couldn't get up. She lived alone and she was in a rather dangerous pickle. At that age, the backyard goes from being a place of solace to being a place that can kill you. The old bird examined her options and noticed a tree about 200 paces down the sloping hill. She couldn't get up, but she could roll - and so she did, all the way down that hill until she hit the tree and used it to scrabble and pull herself back to her feet! You or I might pack it in and move to an old folks home in circumstances like that...but not this lady! Life was all about challenges and meeting them and she planned to do just that until she died. She was a wonderful woman with neighbours much like PP who thought nothing of a quick trip up and down her driveway with the tractor to clear snow, or help out with heavier chores.
In any event, Gramma beckoned me over, she got on one side of Aunt Ruth, I got on the other...and we helped her out to the chicken pen to scoop up a few bags of chicken shit laced soil! We helped her kneel down in it and she cooed and clucked with delight at the texture and quality just like all the other old biddies did. It took us an eon and a half to get her soil, and help her back to the patio. She collapsed into a lawn chair and gasped "I did it! Now I have such wonderful manure to add to the soil in the roses...!" I told her that next time all she had to do was ask ME to do it and she could have all the guano she wanted - but the regal old gal thanked me and Gramma dismissed me. What the hell? None of this made sense to a 13 year old boy. Why would an old woman almost kill herself...for a bag of chicken shit? As I took my leave I noticed Mom...and her face was black with fury! What in hell was this now? I fled to the garage. If Gramma, Aunt Ruth and the old biddies were nuts...Mom was a fuggin psycho in comparison and when she went on the warpath - it was time to get out of Dodge. They were already beginning to bicker when my Honda XL 100 caught - and I was outta there. Later that afternoon Gramma took Aunt Ruth home and then came back for supper with us. She and Mom barely exchanged a half dozen words. After supper when Gramma was headed home I caught her and asked if she could explain a few things to me. She and my Mom were furious with each other and I had no idea what was going on.
The story was that Ruth was getting old. Being old means getting frail and Ruth was going to battle that process all the way to the grave. It was important to her to get her own bird shit rather than have me do it. Getting a few spade-fulls of chicken shit to her would be like a young man successfully climbing Mount Everest. Gramma was all for that battle and completely on Ruth's side right till the bitter end. Mom - she felt that Ruth should be in an old folks home, properly cared for and looked after. It was Ruth's intention to die in her cottage at home and Gramma fully intended to see to it. Mom was so mad the two women weren't talking - they just glared at each other as the banged and clashed the dishes as they washed up after supper. Mom didn't even come out to say goodbye...and Gramma packed up and drove off in her pristine 1974 Volare. I will forever remember standing on that driveway that beautiful summer night trying to get my head round all that. As a young teen trying to make sense of this adult stuff was like trying to take a sip from a fire hose.
I found Pop hiding behind the barn with the horses, sitting on a hay bale and smoking and thinking. "Dad - the women: who's right in all that...?" I asked. He sighed and looked at his cigarette, and paused. "They all are, kid."
What kind of answer was that? "So what are they gonna do?"
"Well, they'll figure it out, I guess."
A couple months later the leaves all turned colour and Ruth solved the problem for everyone by passing away in her sleep, alone in her small cottage by the lake. I was never close to her having only met her twice in my life and to this day I figure Pop was the only one who was right about anything in that flap. Sure, Ruth passed in her sleep and that's great and all...but she could have fallen down some stairs, or slipped outside in the winter...it could have gone the other way too and her death could have been much more miserable. Mom had a point too. But then again, who's to say that dying in a hospital with tubes up all your orifices is any better?
Do we figure things out...or do they work out? Or both? Yannow...if I could do anything in the world right now I would go over to CM's with a shovel and start turning over the soil in the chicken run. Or maybe I would hide behind the barn and talk to the horses and start smoking again.  ;)
﻿
Posted by Glen Filthie at 03:11