For the last little while I have been STINKING out the gun ranges of Alberta with this little masterpiece: 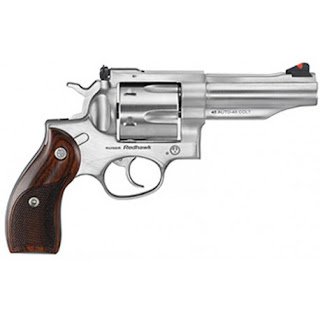 This little gun is a masterpiece right out of the box...
It used to be my scholarly opinion that the King Of Calibers for the wheelgun was the .41 Magnum. But man, oh man - if you aren't familiar with the .45 Long Colt - you gotta jump on it and fix that. This caliber is EASILY on par with the .41 magnum. Put it in a DA revolver like this Redhawk here...and you have something special. This thing is handy as any auto and more than some - and best of all: you don't have to chase your brass over hell's half acre to retrieve it! That is a big deal for guys like me that reload and make their own ammunition!

I got in a heated battle with one of God's Gifts To The Shooting Sports over on Canadian Gunnutz. I love Ruger wheelguns - but I fuggin HATE their triggers. I am speaking of the singe action mode here only - some of the DA guys say Ruger triggers are just fine in DA mode and I will take their word for it...but for SA shooting (which is 95% of what I do) - that trigger is a bear to work through on the target range! I'm a slow fire bullseye guy...and that heavy trigger has slowed me down even more! But...today I managed to put an honest 75% of my rounds in the black which is almost on par for what I can do with my beloved autos. I'm gonna need to do some tweaking here and I don't look forward to it. In the States good gunsmiths are a dime a dozen. Here in Canada? A good revolver smith is worth his weight in gold.

Not to start another dog fight with the scholarly Gunnutz...but I maintain that Ruger triggers can be slicked up and honed to meet and even beat those on a Smith & Wesson...and because these Redhawks are built like tanks they can handle a steady diet of heavier loads too. I love S&W, all the ones I've ever borrowed were great...but my own guns are Rugers.

Soooo - in an effort at getting that stench coming from my place on the firing line...we are placing an order with our fine firearm friends at Wolff Springs! This should be your first stop for any new Ruger owner. Springs are a snap to replace and just lightening up that horrid trigger should help a bit. There is still some creep in the trigger...but it's not bad. That IS a job for a gunsmith and I won't dick with it.

I turned into a bit of an ammo glutton on the range today because I was doing so well. Usually I do 20 or 30 rounds at a pop but today I did 40 and the little gun ran like a champ. God - I love not having to pick up brass!  :)

In other gun nooz - I finally ran out of Winchester Wildcats today. Back in 1993 my wife and I decided that if I was to ever get ahead in life - I would need to go back to school. That meant shooting would be something I would need to ration...so I stocked up on .22! I bought 3 cases - cases, not bricks - 15,000 rounds...of .22 ammunition! 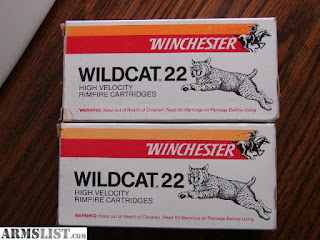 My bulk buy worked out to about $1.65/box...which I considered highway robbery at the time...
I just fired off my last box of it today. 23 years that ammo has knocked around closets and basements...I might buy another couple cases to get me through to retirement. My problem is I lose interest in the .22 for years...then periodically re-discover it and enjoy just shooting these zippy little rounds and punching paper, cans or gophers just for the hell of it! Think I might go with Federal this time round, though.
See ya on the range - and be sure to bow and scrape before my ballistic authority - or be prepared for a cut-throat shooting and pissing match! Gun club stub-farts and pikers alike are warned in advance that no quarter will be given and none asked for!!!﻿
Posted by Glen Filthie at 14:43