This weekend we have one for CM - who has a thing for sweaty lumberjacks.

This weekend's cartoons are short and sweet, dedicated to the responsible adults that police this blog and others were the children are likely to hurt themselves. A friend of mine in the logging industry told me that years ago, a D9 cat was out in the back country muskeg building a logging road where it became mired in the 'skeg. At the time the D9 was the biggest earthmoving monster ever to tread the planet. 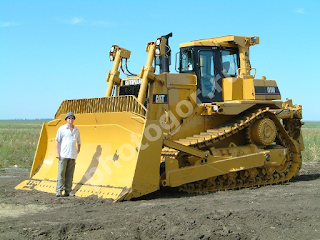 Of course now this machine is a flyweight compared to the bigger bruisers....

The boys weren't worried - if you don't get stuck out in muskeg country - you ain't doin' it right! Another D9 was ordered in to retrieve the first...and it got bogged down too! Now the boys were worried! After much handwringing and sobbing and wailing...a third D9 was brought in to rescue the second...and of course it got sunk in the schmag. At that point everyone threw their arms up in despair, and decided to wipe and call it a chit! According to legend, those three D9's are still out there, slowly rusting and returning to the earth their metals were mined from.

In other good news The Mohave Rat is back. Awhile back he fell off the net and we were about to send BW out on his motorcycle to investigate... but all is well! He's back up on the side bar with the other Extraordinary Steamers where he belongs! It's all good, especially as BW tends to get tetchy and pissy when we send him out on the motorcycle in the middle of winter! The Rat Came Back! Which inspires this timely cartoon:


I love cats. Years ago we had two of the smelly bastids. One was a semi-retarded farm cat that I captured in Pop's haystack. (I still have some of the scars). The other was one my daughter brought home and he was smarter than most humans. One day he disappeared without a trace like the Rat did...and everyone was heartbroken. Day after day passed and finally I sat down with my young daughter and explained that her kitty probably wasn't coming back. Death of a loved one is a difficult thing for little kids and I may have shed a tear or two too. It was time to declare him MIA and try to get on with life. The little chit turned up a couple days later. Apparently he was in a neighbours garage (probably looking for something to steal, or a tool box to shit in) - and the neighbour closed up his garage and went on vacation. How did the cat survive in there? There was no water, and he must have been in there for about a week! In any event, the neighbour got home, opened the garage door...and Smokey Joe came out of there at 100 MPH and headed for home at top speed. It is my contention that there is so a God, and that He loves fools, cowards and little girls. Ol' Joe has been gone an awful long time now...but there are times when I feel like I should just be able to go over to his favourite chair and pick him up and start petting him.

Maybe this weekend, we should spare a thought for our departed friends this sunny weekend. I refuse to think they're gone permanently and they might appreciate the thought! :)
Posted by Glen Filthie at 14:34