My name is Glen Filthie. I am a gun whore. I would like to apologize to everyone that has been hurt by my selfishness and foolish addiction - er...well maybe my wife. The turd brained liberals and twinks that hate guns can go suck a fart! Dammit. This Gun Whores Anonymous thing ain't gonna be easy...

I got more goddamn guns than I know what to do with and yesterday I crumbled and bought another one. Wirecutter is a gun whore too but I am morally superior to him - I at least pretend to be ashamed of my vice. Many of his views mirror my own. He has a soft spot for the Smith & Wesson .41 magnum - which is probably one of the most under-appreciated guns out there. A friend lent me one on the range once and I promptly tried to buy it off him. When he refused, I became so obnoxious that I got pistol whipped and then bum rushed out the door! There's a reason you don't see them on the used gun racks. Had I been able to weasel that .41off that sportsman perhaps my shooting career would have taken a different turn. Although I love them - I never became a real revolver man. I shoot autos and al mine are .45's. Like Wirecutter, 'I don't do 9mm'. I dabbled in .44 magnum for awhile with a Blackhawk...and shot it very well...but it just wasn't my cup of tea. I live in Canada and am a gun club duffer whose only purpose for handguns is to punch paper...and the big .44 is a big gun to shoot and takes all my concentration to manage the trigger because of the recoil. A lot of people buy the big magnums on a lark but rapidly lose interest in them: the big bores are NOT fun to shoot! They are meant for hunting or lawmen doing social work...but not for the sporting stubfart at the range. I can shoot them - but I don't like them. I do .45ACP - and like everyone else, I do it reasonably well! 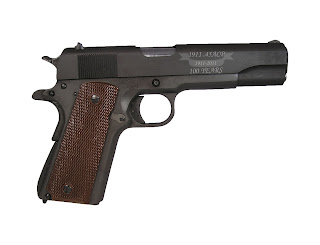 Number 1 - a chit house Auto-Ordnance. I bought it used and burned it up in 5 years. I dunno how many thousands of rounds went down its gullet; but it would punch groups 2~3" all day long. I still have what's left of it - but it's uneconomical to repair. I was in a funk for a long time when the smith told me to scrap it. 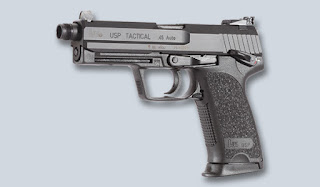 Number 2 - the HK .45USP Tactical. Take a Glock, a 1911, and a CZ75 and throw them into a mixing bowl and beat for half an hour - this is what comes out! In my humble opinion this is the best polymer hammer gun on the market today. If I could only have one - this would be it. 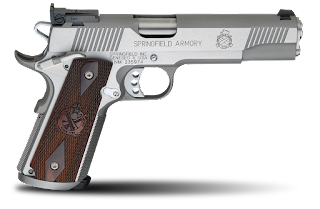 Number 3 - the Springfield Armoury National Match. Big disappointment. A gun that costs this much, and is marketed as a match gun - should be more accurate. Sure is pretty though... 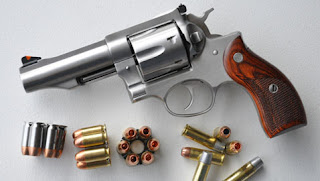 Number 4 - Is this the holy grail? I'll find out this weekend. I have high hopes for this one.
Wirecutter critiques the big Rugers for odd grip angles and horrible triggers - and he is absolutely correct to do so. He praises them for being built like tanks and he's right about that too. As a shooter I will adapt to whatever I have in my hands so I can get around that. The triggers? I'll get the wife to order in some Wolff spring kits and lighten up the pull a bit - and if it's really bad, I can take it in and have a gunsmith polish up that trigger to break like the best S&W's. After that - it's all trigger time! This baby shoots the .45 ACP in 'moon clips' OR the .45 Long Colt which intrigues me. The power band on this gun is going to be awesome - .45 ACP pussy cat loads for paperwork...and you could conceivably load it up to near .44 magnum performance with the .45 Long Colt. I dunno if I'll do that, my thinking has always been that if I need a cannon I will go out and buy one...but the option is there. The gun itself is so ugly - it's almost purdy in a retro sort of way.
I'm not expecting miracles from this gun at first...but once a few tweaks have been done, we'll see what happens. Wish me luck, boys! And - good shooting to you too! Fill those score cards out honestly, damn you!
Posted by Glen Filthie at 05:52