PP hunkers down and prepares for the onslaught. I don't care how many Orcs, zombies, and godless heathen scum sucking commie bastards swarm the Small Hold - I have his six. And by Godfrey, when the survivors find my corpse - they will find it amidst a pile of spent shell casings, my guns with the mags dropped and the bolts locked back - with my knife buried in the gizzard of one of my assailants close by. 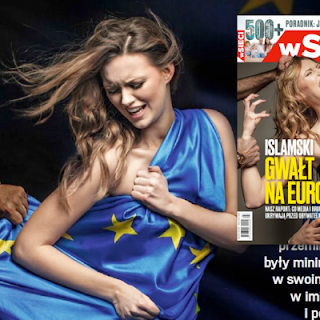 Poland is not having any of Europe's multi-culti rot about third world migrants. This politically incorrect magazine cover has incensed the Usual Suspects.

The biggest mistake women and ethnic vibrants make is insisting that we lower the performance bar so they can get over it. When I was a kid women were breaking down the doors on prestigious, exclusive institutions that had previously only allowed men in their hallowed halls. Thirty years later those institutions are no longer prestigious or exclusive - and are often mediocre at best. But women and vibrants can go there - so there!!!

As a white straight males we are expected to own our mistakes and wrong-doing...not only ours, but those of our ancestors as well. I think it's time that women, vibrants did the same. If I see something, and it isn't right, goddammitalltohell I am going to say something and if some leftist idiot is offended - so be it.

Things can't go on like this.
Posted by Glen Filthie at 06:33