The Wood Chips Are Flyin' At The Ferguson Sword & Saddle Shoppe!

And the blisters are balm to the soul!

Boys, I am an unrepentant, incorrigible gun whore. I have everything from black powder rifles to black rifles that can fire off 30 rounds in less time than it takes to think about it. I have too many pistols. Most men go to the golf course, or the bar, or the track to decompress...I go to the rifle range. Or...I started going again. I have forgotten and rediscovered the mental discipline required for good marksmanship - and for me, going through the mental process of stance, natural point of aim, breathing and sight alignment - it's stress relieving.

There is no better rifle in the world for shooting pleasure than the M1A or, as the green bean fuggin Marines call it - the M14. The Marines replaced this rifle with the legendary M16 back in the 60's and apparently some of the jar heads are STILL mad about it! I personally think it was a good decision, the M16 in its modern format is just simply a better battle rifle. But all the characteristics the squaddie may have against the M14 - are outright boons to the gun club stubfart! It has match sights, it's heavy and when you snuggle up to the stock and sling up for some cut throat target competition - no other gun on the planet feels better than this one with the possible exception of the M1 or the older Springfield 1903 bolt gun. Those guns are getting near on collector status and cost as much used as some M1A's cost new!

Unfortunately for old farts, the eyes are always the second thing to go! HAR HAR HAR!!! When you get old your eyes begin to betray you and often - scopes become the order of the day. Going to a scope on a gun like this is like going bald for men - it is a heart breaking and humiliating admission to mortality and your submission to the aging process. This gun is not meant to be scoped and was designed from the ground up as a rifle for a younger man with lighter feet, steadier nerves - and sharper eyes.

We do what we must. I bought my scope mount from the boys at M14.ca. It's a superb piece. The problem then becomes getting a good cheek weld on the stock - crucial for serious target work. That in turn means a 'riser' or a raised comb on the stock that will line up the shooters face and eye with the scope. 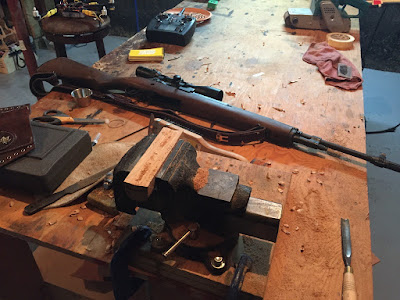 I'm carving a wooden insert that will be wrapped in leather and laced on to the gun. 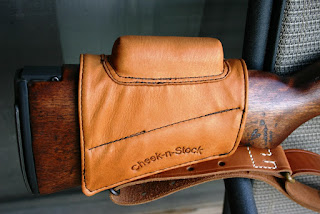 I hope to end up with something like this - only better.
﻿
The man-cave is truly a wonderful place to be. All kinds of ass-hattery goes on down here. I have weapons of ass destruction that are not only firearms - but machines that burn, cut and make all kinds of hellish noise. One of my favourites is a wood burner used to burn pictures onto wood. 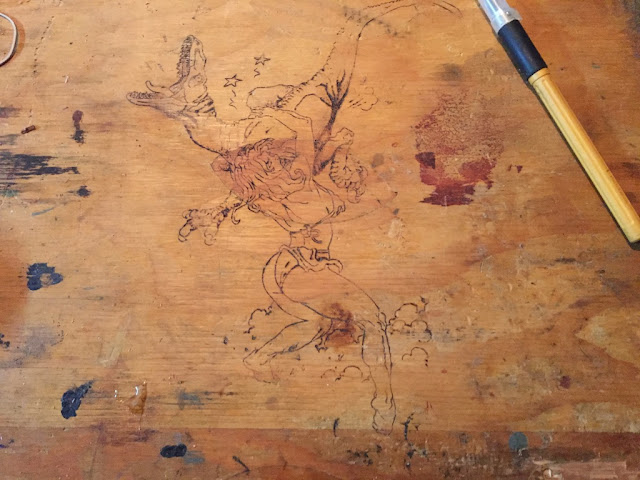 A Pyrograph of prehistoric poultry production - burned into my workbench.  You can barely see it after decades of scuffing, paint and stain...but you can still see the portrait I did of Chicken Mom in her younger days as she wrangled the backyard poultry. She's older than I am, I was born during the Plasterscene Era when the smaller raptors went exctinct and the smellier primates arose.
Oops - my bad. That's actually Shanna, Queen Of The Jungle and I ripped it off a fine artist named Frank Cho and burned it into my workbench one snowy and miserable day long ago. It actually looked good back in the day but all the shading and tones scuffed away over the years. People that see it still smile and chuckle.
Yannow nothing GOOD ever comes out of the man-cave...but everything that happens here is all time well wasted. What's going on in YOUR man-cave this winter?﻿
﻿
Posted by Glen Filthie at 07:47