Clarissa moves and 'reasons' by forces not understood by modern man or science. Why do I stop in there, you might ask? Because Clarissa's blog is like a bowl of chocolates! Stupid women are double edged - one second they're capering and gibbering about like clowns - and in the next, they are like monkeys with machine guns!

It is my opinion that the only thing worse than a monkey with a machine gun is a liberal with a pen. I strongly suspect these boys would vote much the same way Clarissa would.

Who woulda seen that one coming? Liberal twats think Donald Trump is eeeeeeeevil because - wait for it....RACISSSSSS!!!!! 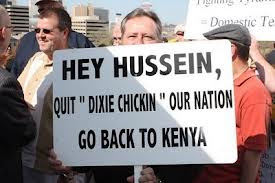 The other day I heard some liberal Yank political wank saying Cruz can't be president because he's Canadian. This pic? From the NYT. Totally NOT photoshopped by the way...
Clarissa is one of those rare women that seems to be able to carry an air of intellectual mediocrity while in reality - is a staggeringly stupid woman. My mother is the same way. She gets her opinions from day time TV and actually figures that the old harridans and spinsters on The View are qualified to speak about the issues they address. Along with Orca Winfrey, Dr. Phil and any number of Hollywood ass hats.
You would think it would be intuitively obvious: Hollywood and Noo Yawk Focken City are famous for producing celebs that are emotional, intellectual and moral cripples. Who better to comment on the social and political issues of the day, right? HAR HAR HAR!
Of course, we all know that the media can no longer be trusted farther than you can throw it. They've tried to undermine and trip Trump a dozen times and he just pushes them down the stairs for their troubles. Many media outlets are in trouble because of crap just like this that has been going on for years... and can't sell a newspaper anymore for love or money. Awhile back some fag at The Glob & Pail was actually asking for a media 'bail out' package from the gubbermint because even dummies like Clarissa won't subscribe to that shit rag. 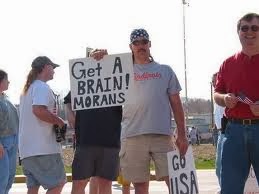 Remember these racists taunting the Buckwheat Administration? These supposedly racist Tea Partiers later turned out to be liberal protestors against the Iraq War. Uncle Bob and Fred Reed were probably loose in that crowd too! Sorry Clarissa - only idiots trust the media these days.
I am Canadian and probably shouldn't comment...but I like Trump. If for no other reason than that he's forcing people to think about issues and political hot potatoes that none of the other twits will touch with a ten foot pole. Bernie and Hillary? In better times they would have been hung for treason, and guys like Obama would be shining shoes. That last isn't racist, it's realism. That idiot got his job based on the colour of his skin and not the content of his character and now America has the economy to show for it. For my two cents the other repubs are great guys but...they aren't leaders and everyone but the repubs know it.
Good luck, Mr. Trump. If ya win - could you do Canada a favour and drop an H-Bomb on Parliament Hill? Do that, and help us out with the Keystone pipeline...and we will cut you a sweet deal on some Alberta crude! Oh, we might have to shut the valves east for a bit - but it would do those liberal idiots good to sit and freeze in the dark. 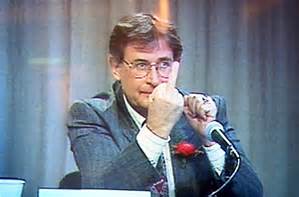 In loving memory of King Ralph - seen here politely acknowledging the protests of an environmentalist. We need more men like this in our leadership...not less.
﻿
Posted by Glen Filthie at 07:05