I've been picking on the Knuckledragger a lot lately and I suppose I should apologize - but that guy is so much darned fun I can't help it. He has a scholarly article up on his AR build that is worth a gander if you are into these guns - as I am. 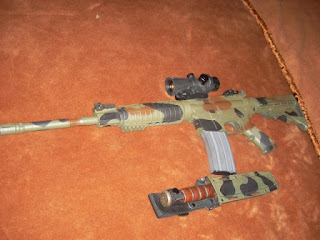 The AR is a modular military rifle that has taken about 50 years to perfect. When it came out it was an unreliable piece of crap. It was prone to jamming, and was sensitive to dust, grit and crap commonly found on a battlefield. Many soldiers were rightly furious with it when it bunged up in th middle of a firefight as it was famous for doing in the jungles of Viet Nam.

Over the years the gunnies and hobbyists and the industry at large slowly improved it until guys like us can mod them to our particular wants and needs and put them to any chore possible for pretty much any gun! Quite simply - it is the modern do-it-all gun. The one above is built to WC's personal requirements and is EXACTLY what he wants of it. One of the advantages he missed in his article was that in addition to being able to mod your gun to your own likes and tastes - you can take as long as you want to make them. Can't afford the Giselle trigger yet? Put in a cheapo milspec unit for now and swap it out later when ya got the cash! 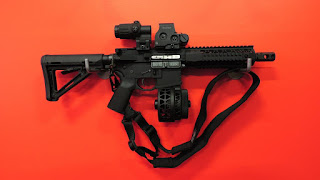 My AR is a 7.5" Black Rain stubbie. This one carries tactical farkles I can't be bothered with - mine has a 3X  Vortex combat optic - and that's it.

WC's carbine is an awesome general purpose gun. Mine is a close quarters house cleaner meant to hit big targets at very close range. Unlike WC's gun, this is a specialist's weapon. Anybody could probably pick up WC's rifle and shoot it well - that is why the military uses it. Mine is short and handy - which makes it very easy to wave that muzzle around. You have to take the same care with the stubbies that you do with a pistol - always be aware of where that barrel is pointed! That short barrel also produces a hellish muzzle blast - you can feel it right in your sinuses when it goes off and for newbies it could be intimidating as hell. When I do slow fire work with it I have to think my way through the shot. Once you get used to it - it's not bad...but it's there.

One day for gits and shiggles I used up my last four rounds going prone with it at 200m. 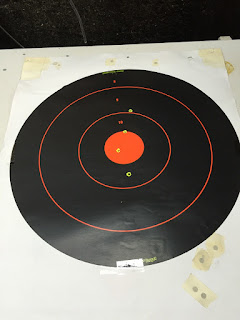 HOLY CHIT! Not bad for a pocket rifle with an outhouse combat optic!

I didn't buy the gun to defend my castle or threaten the totalitarians in gubbermint - I bought it on impulse as a range toy thinking I would just sell it when I got bored with it...but I think I'll keep it. Mine is a 'Boutique gun' but a guy like WC (or yourself) could build one exactly the same if you were so inclined. Unlike WC I am not a builder. He knows his way around an AR and I don't. I bought mine because it has warranties, QA/QC requirements and so forth. The stubbies can take some tweaking and there's some special considerations to be taken with them - and I am just not into tinkering and trial and error. I waste enough time on the reloader without taking on that hassle.

So...that's my AR. If you are ever tempted to get into these rifles you need to define its mission first. Is it for run n' gun? General purpose? Hell - you can get air-gauged match varmit rigs built around the AR15 and some will go head to head with a bolt gun!